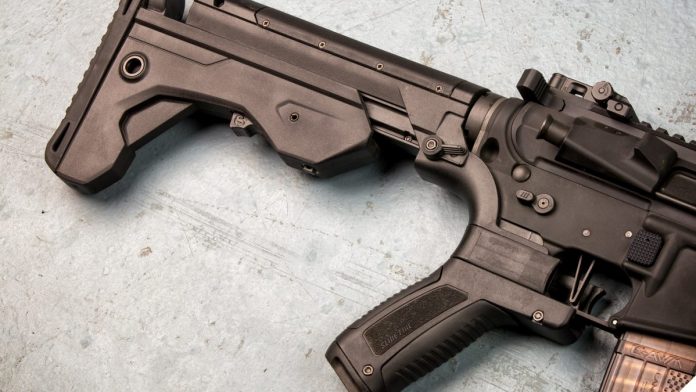 The U.S. Court of Appeals for the D.C. Circuit ruled that guns equipped with bump stocks qualify as machine guns, which federal law almost entirely bans. The decision was a setback for the Sacramento, California-based non-profit Firearms Policy Coalition and other gun rights advocacy groups that had sued to challenge the rule.

We are continuing to see the spirit and letter of the law clash in this regard. Bumpstocks are not machineguns in any sense but legally. It makes no practical mechanical sense, but when has that ever stopped a law…

“We are disappointed but not surprised at the result,” said Erik Jaffe, who represents the gun rights groups. “We think the court made a number of factual and legal errors that we plan in pointing out in further appellate proceedings.”

Translation, the court has probably tossed this to the Supreme Court, or at least someone else, so they aren’t blamed for being the ones to bring the scary, go pew fast plastic back onto the market, with its use in the Mandalay Bay slaying and other negative associations. We’ve talked here before about the Las Vegas massacre and how the bumpstock did not significantly enable the horrific casualty count. That was largely the concert venue and attack location, where any rifle would have been devastating. A bolt action rifle under those circumstances could have perpetrated the worst massacre in US history.

A spokesman for the Bureau of Alcohol, Tobacco, Firearms and Explosives (ATF), the federal agency that oversees gun regulation, declined to comment.

They know that as soon as an objective court not swayed by rhetoric, or events, or playing it safe for their district and passing the buck, takes up the case it falls apart. The entire determination is that a stock with no active mechanisms makes it too easy to shoot fast and that is too much like a machine gun.

And here we see blatantly inaccurate reporting on what a bumpstock is and how it works, perpetuating misinformation about them. Bumpstocks are not complex, just like brake pads aren’t complex. This is the equivalent of telling the public that brakes and brake pads actually reverse the direction of your wheels while you are breaking and that is how you slow down.

That isn’t how you slow down at all, but you do slow down so a casual reader could simply assume that the stated reason is why.

[NOTE: I did contact Reuter’s and the author responded that a correction would be made to the story. I do not know how the bumpstock was actually defended and described in deliberations. I will maintain the original text here because it was the forward facing text at the time of publication and the court decision.]

Former President Donald Trump had pledged to ban the devices soon after a gunman used them to shoot and kill 58 people at a country music festival in Las Vegas in October 2017.

In December 2018, the administration announced that a rule classifying bump stock-equipped guns as machine guns. A 1986 amendment to the National Firearms Act and Gun Control Act banned nearly all sales of newly manufactured machine guns.

The gun rights groups sued the ATF in Washington, arguing that the agency lacked the authority to expand the definition of machine gun. U.S. District Judge Dabney Friedrich denied their motion for a preliminary injunction and later granted the government summary judgment, finding the agency was entitled to deference in interpreting the definition of machine gun under federal law.

This is… concerning. Machinegun has a very concrete mechanically engineered definition. We aren’t asking how humid is “uncomfortable”, a question which has a subjective answer within a range. We are asking if a firearm is designed to and capable of firing, reloading, and firing again with a single deliberate manipulation of the trigger. That is yes or no.

On appeal, the groups argued that bump stock guns do not qualify as machine guns because the user has to keep pulling back as the gun recoils. The panel rejected that argument.

That isn’t how bumpstocks work and if this was the actual argument the layer failed in their description of the device’s basic function.

“By this logic, we would no longer characterize even the prototypical machine gun as a ‘machine gun,’ given the extent of rearward pressure on the trigger required to operate it,” Circuit Judge Robert Wilkins wrote. “That cannot be right.”

No. It isn’t right. Everyone is misunderstanding this and we have a silly decision because of it.

It is all there, right there, in how this device works. A bumpstock does not make a rifle automatic, it gives you a situationally specific mechanical advantage in how quickly you can manipulate the trigger, taking advantage of the recoil impulse which is always there and your supporting arm which is also always there.

A bumpstock is in no way required in order to ‘bump fire’ a firearm. The internal mechanisms to make a firearm automatic are absolutely required in order to make a firearm automatic, parts have to work in a specific order. To use a vehicle example again. An automatic firearm’s mechanism is like a set vehicle of brakes, they are specifically designed to stop a vehicle. You can also stop a vehicle by having it run out of momentum. A bumpstock is more akin to a navigation app that showed you where you could stop your vehicle without using your brakes, thus helping you do something you can do without the app. It is not a secret different method of braking, no brakes are involved at all.

This court ruling is essentially, “Yeah but you still stopped, so the United States Department of Transportation says that is braking.”

Put another way, the court is trying to tell me that the FAA says I can fly and I am therefore a plane, when what I actually did was skydive or even just jump up into the air. There justification for continuing to tell me that I am legally a plane is that I was in the air. Even though flight is a definable powered mechanical process, because I was in the air I was “flying” and am therefore a plane. That is the logic being used to say a bumpstock is a machinegun.