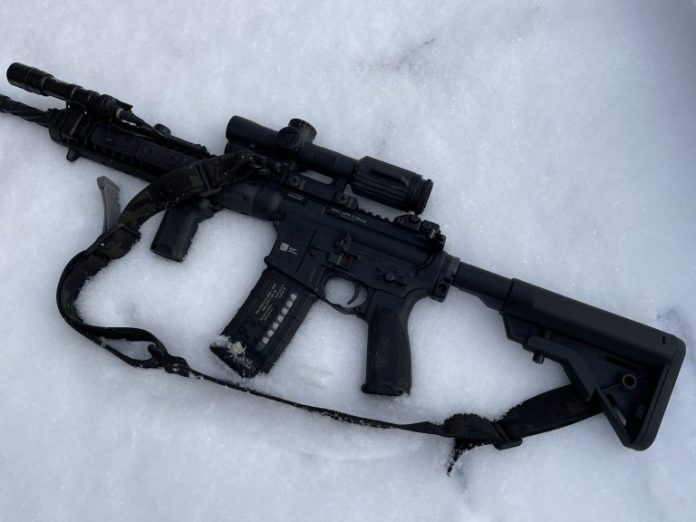 The following was a letter to the editor to The Columbian, referencing, I assume, another letter.

James Ault’s letter in the June 15 Columbian is typical of right-wing gun nuts’ “nothing up my sleeve” verbal sleight of hand (“AR-15 is natural evolution,” Our Readers’ Views). In outlining why the AR-15 is not really a military-style assault rifle and insinuating it gets a bad rap because of its misunderstood appearance, he leaves out the most relevant fact: It’s designed to kill a whole bunch of people in a short period of time, and has no other purpose.

It’s what is colloquially known as a ‘Hot Take’, a quick sentence or paragraph that summarizes the feeling on an event or topic. Twitter, in essence. The limitation with that is there is no room, none, for nuance, but all the room in the world for hyperbole.

With SCOTUS delivering a ruling on each of, arguably, the most hot button issues of our time this weekend, we have been treated to an absolute master class in hyperbole, metaphor, and exaggeration in pursuit of various points of view and goals. To no one’s surprise the point of view and the goal are not always the same from the same person.

I didn’t know how I wanted to approach writing down my thoughts, I am still figuring it out because the two are connected on several levels and those levels I feel are being missed by the masses.

Then this short piece above hit my inbox and I decided that I may not know where my thought will finalize, but I can begin here.

We must, as a nation, start more responsibly using our literary tools when we are discussing matters of civil rights and law. We must, even if our ire is up, remain as dispassionately calculating as we can when things go our way and when things do not. I know I vent my spleen here often, but even in my disquiet I attempt to discourage my disappointments in a rational and concise way that will arm a reader to move this conversation and policy forward.

In short, we must use nuance where nuance is needed, and it is universally need in the application of law. Each application of the law is a unique circumstance with an individual or multiple individuals involved.

We make progress through discussion.

Not all conversations or arguments are discussions. A discussion, even a heated one, necessitates respectful acknowledgement of the viewpoints and the assignment of validity based on correlative data both supporting and opposing a concept. We are living in an age where an opinion shouted loud enough is supposed to be a fact, and it gets bonus points based on the how politically ‘in’ or politically contrarian it is. What we additionally mistake for facts are supported opinions, opinions backed by facts but they are opinions based on the data the facts give. The facts themselves, such as an individual’s action or inaction, an observed trend of events, or a law of physics may support your opinion and thus be a supported opinion, but do not mistake an opinion for the facts.

Remember too, that the concepts of ‘Freedom’ and ‘Personal Autonomy’, are opinions. They are beliefs, concepts of how someone should be allowed to make determinations on their own, while the facts are the real world results of each instance. The facts, as an example, show that not everybody is capable of independent action and decision making that is not harmful to themselves or others. Sometimes this is their deliberate acts contrary to the good and order of the remainder, sometimes this is beyond their conscious rational control because their particular example of the human experience is outside the ordered parameters of those around them. They could be disabled, criminal, or insane, and the result facts of their actions or choices make for an less than desirable result.

Give people the choice to do as they wish and some of them are going to OD and take crap on a sidewalk, others will insist the earth is flat and that gravity is a result of constant acceleration and not mass. The human experience has a lot of facts and even more opinions.

So now let us return to this “Fact” *opinion* that the AR-15 has a limited purpose, as written above.

James Ault’s letter in the June 15 Columbian is typical of right-wing gun nuts’ “nothing up my sleeve” verbal sleight of hand (“AR-15 is natural evolution,” Our Readers’ Views).

Opening with an ad-hominem attack is rarely a good start, but doesn’t necessarily invalidate the commentary that comes after it. These are opinions and believing that I and my ilk are “gun nuts” is what they believe. Whatever, I’m having wrong fun and believe in my sacrosanct ability to fight for my life with an effective tool and ‘you’ believe that is nuts… for reasons… Okay, we understand each other. At least, I understand ‘you’ on this point.

The “nothing up my sleeve” seems to mean that the ‘natural evolution’ letter either didn’t resonate, or it is plausible the writer here is deliberately misunderstanding to push their opinion as fact.

In outlining why the AR-15 is not really a military-style assault rifle and insinuating it gets a bad rap because of its misunderstood appearance, he leaves out the most relevant fact:

We’ll get to the ‘relevant fact’ in a moment. First lets address why the AR-15 isn’t a traditional military assault rifle.

That covers it. The definition of assault rifle includes select-fire, the ability to fire in a burst and/or fully automatic. The AR-15 may be the same shape, color, size, weight, and fire the same caliber ammunition as the military rifle, but unless it is a machine gun (by the legal definition) it is not an assault rifle. It is merely an intermediate caliber semi-automatic rifle.

If you want to call that a technicality, fine. I agree. The M16A4 ‘Clone’ that is a semi-auto only, but otherwise built with the same parts as an M16A4 that would’ve been shipped to me in the Marines, firing M855 ammunition would have the same shot to shot lethality as an actual military assault rifle. I’ve gotten into fights a plenty online with veterans on the pro-gun side of things who insist the AR-15 is completely and totally different than an AR-15… and that’s fundamentally not true. They are nearly identical. They are functionally identical if used in semi-automatic.

But the “weapons of war” analogy falls into utter ruin the minute you analyze it, because combined arms doctrine is how you win a war and not an AR-15. The rifle and the pistol of any given military force are arguably among the least important weapon selections, provided that they function. How the manage the high explosives, armor, indirect fire, air support, and ground force day and night movements are the true weapons of war. The service rifle is mostly a logistic note.

The rifle gets its ‘bad reputation’ from both ignorant and deliberate misunderstandings. People deliberately misunderstand the rifle all the time because they are not looking to understand it, they are looking to be mad. They have made up their mind. That reputation is centered among a certain group of people, ones who do not like firearms and are unlikely to hold any firearm in good repute. So it’s reputation is can be determined based upon nothing of the rifle itself, but purely on the prevailing attitude of the crowd you are interacting with. That isn’t a reputation, that is a bias.

It’s like people who hate pitbulls, it doesn’t matter how many times you point out the millions of good dogs, the prevalence of pit mixes compared to the other large dog breeds (Rotts and German Shepherds for example), or anything else. Their minds are set, they hate the dogs, and they want them destroyed in many instances.

It’s designed to kill a whole bunch of people in a short period of time, and has no other purpose.

*Sigh* This isn’t a fact, it is an opinion, and it isn’t a very well backed up one as, again, the rifle of any sort is ahead of only the pistol in its ability to cause casualties as a weapon of war. Explosives are king of the battlefield.

Yes, the AR-15 was designed as a fighting rifle. In fact it was designed as one that was lighter and easier to handle, doing so by using a much less powerful round than the previous fighting rifles. Yes, it is lethal. Yes, it can be fired quickly and accurately. That descriptor covers just about every single rifle produced since 1928.

There is no rifle that is good for fighting, and thus defending yourself and your community, but not good fighting if you are bad. It doesn’t exist. It cannot exist. A rifle is not designed to “kill” it is designed to function. Ammunition may be designed to kill, and physics and biology says that it can. But a rifle is designed to work.

Firearms do one of two things, they work or they don’t.

Can be used to and designed to are not the same. Because in reality, the AR-15 was designed to protect. It was designed to be an efficient individual fighting rifle so that a soldier, an officer, or citizen can bring an effective force against something threatening their life. That ability necessitates and cannot be divorced from the ability of a rifle to be used harmfully. It is force made of metal and polymer.

A rifle, especially an assault rifle, is designed to be ‘force’ for whoever holds it. That is the fact. How someone employs that force is entirely in their own care. Your opinion based upon that fact may vary. But it does not make your opinion fact.