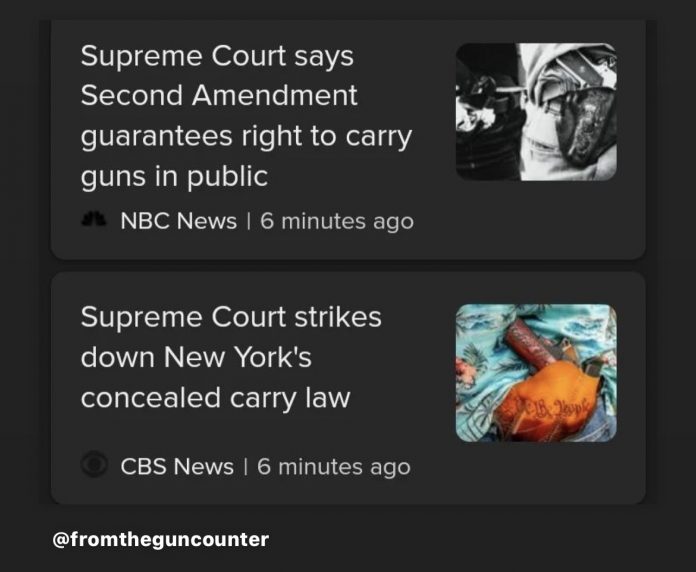 Credit where credit is due, I saw it first from FromTheGunCounter on IG. If you aren’t following that account you are missing out. Do that.

From the NBC Report,

The Supreme Court ruled Thursday that the Constitution provides a right to carry a gun outside the home, issuing a major decision on the meaning of the Second Amendment.

The 6-3 ruling was the court’s second important decision on the right to “keep and bear arms.” In a landmark 2008 decision, the court said for the first time that the amendment safeguards a person’s right to possess firearms, although the decision was limited to keeping guns at home for self-defense.

The court has now taken that ruling to the next step after years of ducking the issue and applied the Second Amendment beyond the limits of homeowners’ property.

The case involved a New York law that required showing a special need to get a permit to carry a concealed handgun in public. The state bans carrying handguns openly, but it allows residents to apply for licenses to carry them concealed.

The law at issue said, however, that permits could be granted only to applicants who demonstrated some special need — a requirement that went beyond a general desire for self-protection.

In an time and on a day where we are battling again in the halls of Congress against Red Flag legislation that could get very dicey since it just cuts checks to the states and to make their rules, this is a welcome sign of victory.

The 2nd Amendment applies to a person, not a property. A person is sacrosanct and their right to bear arms goes with them. They need no special permission above and beyond being a citizen or resident in good standing. If there is to be a license to carry a firearm criteria must be clear and evenly applicable with no special discretion granted to the government to deny on a whim.

In short, the entire nation is now a shall issue standard for concealed carry and states with discretion to deny will lose it and need to create an objective standard.

“The constitutional right to bear arms in public for self defense is not ‘a second-class right, subject to an entirely different body of rules than the other Bill of Rights guarantees,’” Justice Clarence Thomas wrote in the majority opinion. “We know of no other constitutional right that an individual may exercise only after demonstrating to government officers some special need.”

New York’s proper-cause requirement violates the Fourteenth Amendment in that it prevents law-abiding citizens with ordinary self-defense needs from exercising their right to keep and bear arms. We therefore reverse the judgment of the Court of Appeals and remand the case for further proceedings consistent with this opinion.

It is so ordered – Opinion of the Court