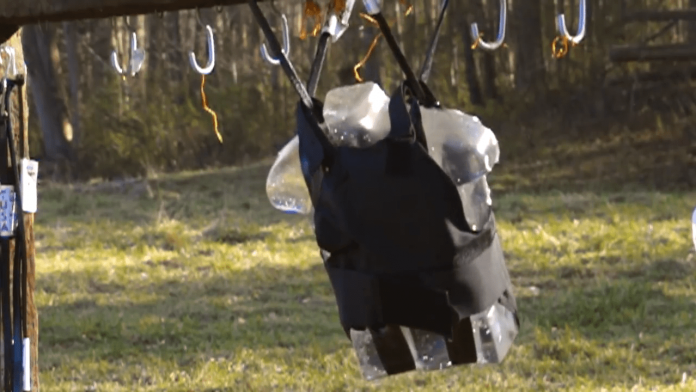 Nope, not kidding. The confusing new law in New York that is attempting to disarm would be shooters by denying everyone body armor (not sure how that one adds up, but okay…) forgot to specify the hard armor, reported as steel plates, that the shooter used in Buffalo.

ALBANY, N.Y. (AP) — New York’s new law barring sales of bullet-resistant vests to most civilians doesn’t cover the type of armor worn by the gunman who killed 10 people at a Buffalo supermarket, a gap that could limit its effectiveness in deterring future military-style assaults.

During the May 14 attack, Payton Gendron wore a steel-plated vest, an armor strong enough to stop a handgun round fired by a store security guard who tried to halt Gendron’s rampage.

A law hastily enacted by state lawmakers after the attack restricts sales of vests defined as “bullet-resistant soft body armor.”

AR500 (Abrasion Resistant) steel was a popular hard armor alternative for several years since the steel plates were much cheaper than the composite ceramic plates used in professional circles. It has some serious downsides, since it relies on shattering and deflecting an incoming round rather than catching it like a composite plate will, but it was the only way to get a vest of nominally effective armor under $1,000. That is no longer the case, level III and IV composite plates are much more affordable nowadays and anyone electing to buy steel to save money is no longer making a smart decision.

“Governor Hochul was proud to sign the groundbreaking new law passed by the legislature to restrict sales of body armor, and will work with the legislature to expand the definitions in the law at the first available opportunity,” said the Governor’s office in response.

Translation: “We screwed up, just like we did with the S.A.F.E Act (remember they forgot to exempt cops, whoopsie) and now we have to fix it in post because it is more important to virtue signal than get things right.”

New York’s ban is aimed at stopping criminals from gaining an advantage over peace officers, or security guards like Aaron Salter, who was killed trying to stop the gunman’s racist attack on the Buffalo supermarket.

Body armor is not magic. It’s an extra 6 seconds of life, a saving throw in gamer parlance. It’s presence did not make or break what the brave Aaron Salter was able to accomplish by resisting Gendron’s assault. It certainly didn’t help Salter, who would’ve needed the time to deliver more shots into effective unarmored areas to stop Gendron, but even had Salter fatally wounded Gendron because he was unarmored we know that a pistol wound can take time to effect the target (North Hollywood).

Of the shooters who killed four or more people in a public space since 1966, 12% wore body vests, said sociologist James Densley, a co-founder of The Violence Project, a nonprofit think tank with a database on mass shootings.

Meaning that 88% did not, and that the presence of a vest is not a substantial factor in how lethal an attack is or how difficult an assailant or assailants are to stop. Armor is a complication, but a minor one in scale. We might as well outlaw a mass shooter using cover while we are at it. Maybe Governor Hochul can put that in the law too.

No pistol armor, no rifle armor, no using things that stop bullets to hide behind so we must make sure everything is the opposite of bullet resistant.