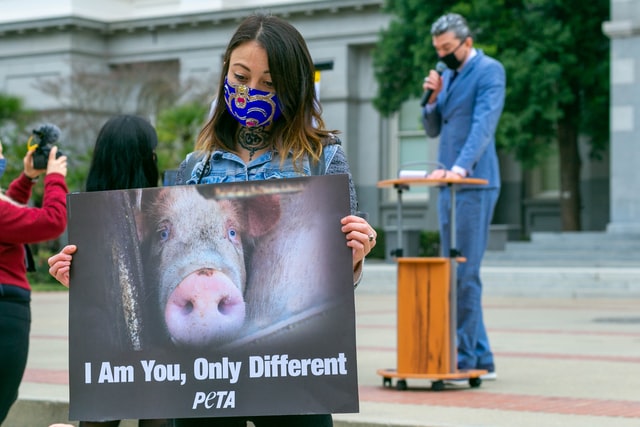 PETA weighs in on the recent decision of an animal shelter banning anyone who supports the 2nd amendment from adopting animals. A manager of PETA made a statement saying that as long as the animals are receiving proper care that is all that really matters. Read more below from BPR.
From BPR:

The animal rights nonprofit People for the Ethical Treatment of Animals (PETA) is now wading into the controversy over a California animal shelter that refuses to allow Second Amendment enthusiasts—or even those who are simply against the repeal of the longstanding constitutional right to bear arms—to adopt pets.

If nothing else, the animal shelter certainly raised its local and national visibility with the decision, which has made headlines. As with so much else in American life these days, it’s yet another indication that everyday life has become so inextricably politicized these days that the Left is even willing to hold innocent, defenseless animals hostage to their ideological objectives.

“We do not support those who believe that the 2nd Amendment gives them the right to buy assault weapons,” the Shelter Hope Pet Shop in Thousand Oaks, California, explained in a statement on their website.

“If your beliefs are not in line with ours, we will not adopt a pet to you.”

That sentence right there pretty much sums up the leftist attitude to life and civic engagement.

A California animal shelter will turn away adoptees who don’t stand for gun restrictions. Kim Sill said The Shelter Hope Pet Shop added, “Where do you stand on gun control?” to their interview process. “If your beliefs are not in line with ours, we will not adopt a pet to you.”

“If you hesitate [during the questioning session], because your core belief is that you believe teachers need to carry firearms, then you will not get approved to adopt from us,” the shelter’s statement added. “If you foster for us and believe in guns, please bring our dogs and/or cats back, or we will arrange to have them picked up.”

The shelter also threatened that any who lie about being a member of the National Rifle Association will be sued for fraud—though whether the shelter would actually have a case in such an instance is anyone’s guess. It is, after all, California.

Nevertheless, the decision by the Shelter Hope Pet Shop has drawn condemnation even from such a reliably leftist organization as PETA. The organization’s assistant manager, Catie Cryar, told Fox News that she knew the shelter did “good work and [was] sure they have the best intentions, but from PETA’s perspective, because there is a homeless animal crisis, what counts is that adopted animals are treated well and cared for and that is the criteria we feel is important.”

Which is, after all, a reasonable attitude, given that many responsible gun owners and supporters of the Second Amendment are among the most loving pet owners. The Shelter Hope Pet Shop, however, is unlikely to change its policy anytime soon.

Tucker Carlson reports that an animal shelter in California is banning people from adopting dogs if they don’t support gun confiscation. pic.twitter.com/J4lesd8SkC

The shelter is owned by actress Kim Sill, who told Fox News that her anti-gun policy stems from her own personal experiences with gun violence. In 1998, she said, her sister was shot and killed by her husband, who had acquired a gun without any kind of mental health check. The trauma of her sister’s murder led Sill to contemplate suicide—but getting into animal rescue saved her.

She also explained that the recent spate of mass shootings, including the massacre of schoolchildren in Uvalde, together with a shooting that happened near the shelter in 2018, prompted the new policy.

“Adoption facilities like mine turn people down for all kinds of reasons,” Sill observed. “They can turn you down for the kind of dog food you tell them you’re going to use on that dog you want, or the kind of cat litter. I mean, seriously, we are a private nonprofit, and we pride ourselves in trying to find the absolute best homes for the dogs and cats that we can.”

Sill added that although she has received “hundreds” of death threats over the policy, she has forgiven them.

Please help us! If you are fed up with letting radical big tech execs, phony fact-checkers, tyrannical liberals and a lying mainstream media have unprecedented power over your news please consider making a donation to BPR to help us fight them. Now is the time. Truth has never been more critical!

PLEASE JOIN OUR NEW COMMENT SYSTEM! We love hearing from our readers and invite you to join us for feedback and great conversation. If you’ve commented with us before, we’ll need you to re-input your email address for this. The public will not see it and we do not share it.