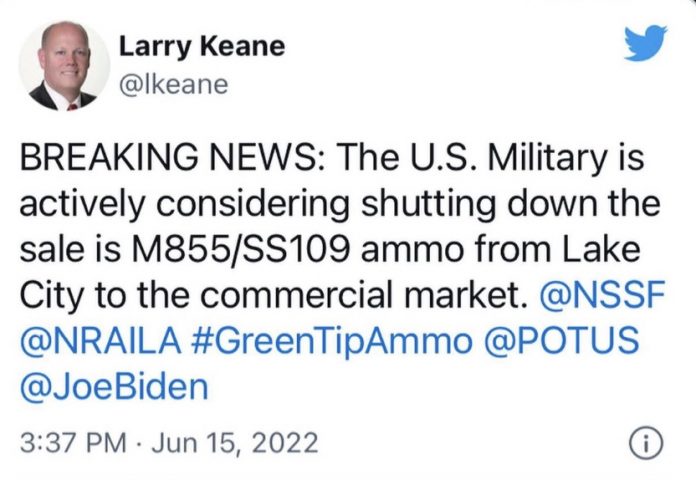 I saw this come across my feed a couple times, even had a conversation about it with a friend or two. Lake City, contractually under the control of Winchester, has allegedly been notified it will no longer sell M855 “Green Tip” 5.56 NATO to the public. M855/SS109 was the standard NATO round (rather NATO projectile, the SS109 is the 62gr copper, lead, and steel bullet, it’s loadings vary a bit nation to nation) from 1980 to present. Standard is a bit of a stretch too, through GWOT we’ve fielded other ammunitions and I believe our allies have too.

There’s a TTAG article I was directed towards to support the statement. It claims the clear reason, the only reason, that that this would happen is the Biden administration putting the screws to gun owners again.

His price hikes have certainly done a number on that front already, but is this more?

That certainly seems like a kick in the teeth.

But let me direct you to the final bit. “M855 and SS109 ammunition produced in excess of the military’s needs“

The Army plans to replace its entire inventory of M855 rounds with the M855A1 round. -Military.com

They have had a new 5.56 round for 12 years, it reached rear echelon support troops in the National Guard by 2019. I, serving in a Guard Maintenance Battalion, the last unit that could possibly need the new ammo, had the new ammo in 2019 shortly after bringing M4A1’s into inventory and retiring the final M16A2’s.

So, before we lose our minds, how does one sell off surplus from the military’s need when the military no longer needs it? The only SS109 Lake City might be directed to produce on behalf of the military anymore, would be for export. Units with stock in Green Tip will be ordering A1 once it runs out or they will swap it 1:1 with A1 if they don’t feel like waiting to shoot it first. I’d be surprised if there is any LC M855 head stamped ammunition that isn’t several years old sitting in depots at this point. The last time I saw issued M855/M856, it was belted for the M249 in 2019. In 2020 it was belted M855A1.

Additionally, Army has a whole new ammunition it has to make. 6.8x51mm is set to be rolling to about 180,000 weapons and those are the weapons likely to see the highest rates of use since they’re in the hands of combined arms troops, not mechanics and admin types. Going to need a lot of ammo for those folks.

So, I’m not saying the calculations that this would change the amount of 5.56 NATO on the open market, and remove a direct government source of ammo which could be criticized, and stop sending ‘armor piercing bullets’ into public hands weren’t all talking points that could be exploited by the Biden camp as ‘further steps he is taking to reduce gun violence’ and so forth. I’m simply pointing out that the government telling Lake City to stop selling something they aren’t making, because they’re making M855A1 instead, is like telling Ford they can’t sell the 2022 Focus.

For anyone not going to do the Google-Fu, Ford doesn’t have a 2022 Focus.

My guess, and it is truly only a guess, is that SS109 continued to roll out of Lake City under Winchester because what else were they going to do with the old components now that A1 was standard? M855 started its retirement in 2010. Imported M855 from nations still making it, like the PMC X-TAC or IMI, are still around. On top of all that, they were usually cheaper than Winchester.

I firmly believe this was a change that was already coming logistically, and now it is here. I could be wrong, we shall see. But I feel like this has far less relevance to the market than the Russian ammunition ban did, and that one was a slow roll since it targeted new import licenses (at the time, pre-Ukraine) and not existing contracts.

Again, all I’m pointing out is there is no overrun or rejected lots to sell publicly as DoD run off if there is no more DoD contract production.