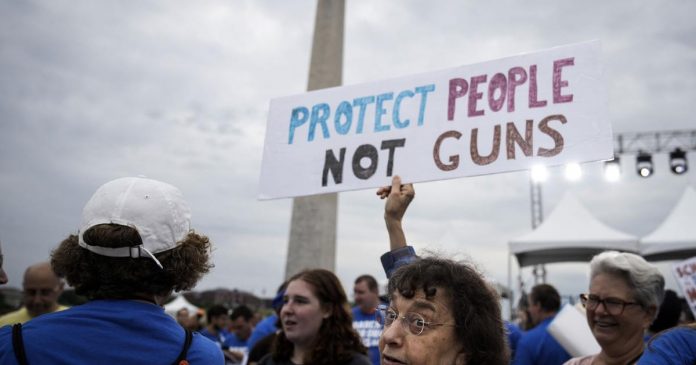 A Missouri law seems to prevent law enforcement from enforcing certain federal gun laws. The bipartisan gun control bill in congress seeks to address this issue with the law. Continue reading this story from the Finger Lake Times:

The bipartisan gun deal in the U.S. Senate announced on Sunday — and supported by Missouri Republican Sen. Roy Blunt — would close the “boyfriend loophole” in federal law that allows some individuals convicted of domestic violence to have guns if their victim is a dating partner instead of a spouse.

But in Missouri, police won’t be able to take action, according to state legislators and an attorney.

A Missouri law called the Second Amendment Preservation Act, or SAPA, prevents local and state law enforcement from enforcing certain federal gun laws, including those that restrict the right to buy or own a gun without an equivalent in state law. Not only does Missouri not have a state law addressing the “boyfriend loophole,” state legislators in 2016 voted to allow convicted domestic abusers to carry firearms.

The 2016 state law and SAPA together ensure domestic abusers will continue to be able to have guns in Missouri, regardless of whatever changes to federal law Congress approves.

The Second Amendment Preservation Act, approved by the Missouri General Assembly in 2021, faces legal challenges in state and federal court but so far no judge has blocked it. As long as the measure remains live, officers are unlikely to act because police departments face potential penalties of $50,000 per violation.

Even as Congress moves closer to passing what would be the most significant federal gun legislation in a quarter century following the killing of 19 students and two teachers at an elementary school in Uvalde, Texas, SAPA underscores how Missouri lawmakers have gone in the opposite direction, eliminating restrictions and expanding access to firearms.

“I was elated to see something truly bipartisan happen in the U.S. Senate. But then, after the excitement about seeing what they were able to agree to, my second thought was, ‘Well, that’s not going to apply to Missouri anyway because of SAPA,'” said state Rep. Tracy McCreery, a St. Louis Democrat who has called for passing a state law to stop convicted domestic abusers from having guns.

In Missouri, most men who kill women use a firearm. A 2019 analysis on men killing women found that 81% of female victims were killed with a gun in Missouri, according to the Violence Policy Center.

The bipartisan deal — at the moment a high-level agreement between federal lawmakers of both parties, not yet an actual bill — would incentivize states to pass red flag laws, which allow law enforcement to temporarily take away weapons from someone who is deemed a threat to themselves or others by a court order. It would enhance screenings of individuals under 21 who buy guns and increase funding for mental health services.

For domestic violence victims and their advocates, closing the “boyfriend loophole” is one of the most tantalizing parts of the agreement.

Still, law enforcement could continue to use federal law to keep guns away from people convicted of domestic violence. That changed when Republican Gov. Mike Parson signed the Second Amendment Preservation Act into law in June 2021.

“It basically means, I would say, that even if Congress passes the boyfriend law … Missouri law enforcement cannot help with the enforcement of those provisions,” said Chuck Hatfield, a Jefferson City attorney and former chief of staff to Nixon when he was Missouri attorney general.

Matthew Huffman, the public affairs director for the Missouri Coalition Against Domestic and Sexual Violence, told The Star earlier this year his organization had found that jurisdictions haven’t consistently applied the federal law. Creating a state law similar to the federal one allows for consistency and ensures that local police are enforcing it, he said.

Huffman didn’t respond to an interview request Monday. The coalition filed an amicus brief in state court in December outlining the ways it says the Second Amendment Preservation Act thwarts limits on the ability of domestic abusers to have guns.

A spokeswoman for Parson, who signed the law at the Lee’s Summit gun store Frontier Justice, said the governor’s office would review the federal legislation to determine whether “legal and operational concerns” exist after it receives more information, when asked if the bipartisan gun deal would conflict with the Second Amendment Preservation Act.

“When reviewing legislation, the Governor is focused on the specific text of the statutes and the interplay between state and federal law rather than colloquial concepts,” Jones said in a statement.

“Governor Parson has never wavered in his support for the Second Amendment and for protecting victims of gun violence and domestic violence and will proceed with these principles as the keystone of his review of any potential legislation.”

Missouri Republicans were critical or muted in their reactions to the U.S. Senate deal, with most avoiding directly criticizing Blunt, who is retiring when his term ends in January 2023. Blunt’s office, which has touted the mental health aspects of the deal, didn’t respond to a question about the effects of the Second Amendment Preservation Act.

Missouri Attorney General Eric Schmitt’s office didn’t answer a question about the enforceability of the “boyfriend loophole” fix in Missouri if it becomes federal law but said Republicans “should immediately stop negotiating with Democrats whose sole goal is to strip away Second Amendment rights for law abiding citizens.”

A lawsuit in state court against the Missouri law is moving slowly. In April, the Missouri Supreme Court ruled the counties may challenge the constitutionality of the law, sending the case back to the circuit court after a Cole County judge earlier blocked the suit.

Oral arguments are scheduled for July 6 in a federal lawsuit filed by the U.S. Department of Justice against Missouri. The DOJ is seeking summary judgment, asking a judge to rule against the law without a full trial.

After the mass shooting at a Newtown, Connecticut, elementary school in 2012 that killed 26 people, the General Assembly in 2014 overrode Nixon’s veto to lower the conceal-carry age from 21 to 19. After the 2015 shooting in a Charleston, South Carolina, church that killed nine people, lawmakers removed conceal carry permitting requirements.

“I want to remain hopeful that my colleagues, particularly my Republican colleagues, will do the right thing and follow Sen. Blunt’s leadership,” Arthur said. “But if you look at the history of what happens in Missouri after mass shootings, it paints a pretty grave picture.”