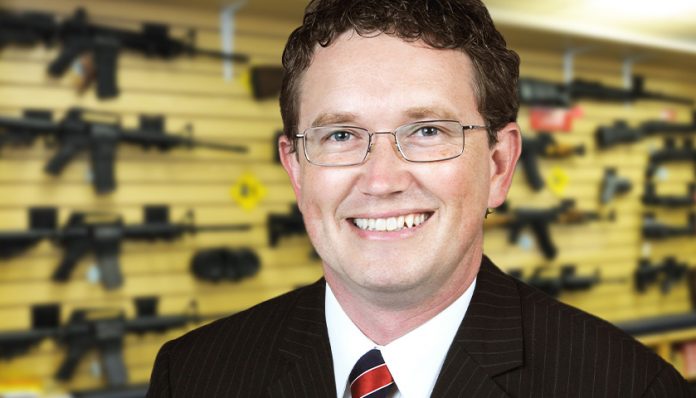 U.S. Representative Thomas Massie (R-KY-04) has come out in opposition to the recently proposed red flag laws. Massie’s opposition to the law is the fear that it will create millions of second-class citizens, while doing nothing to address the mass shooting issue. Continue reading this story from The Ohio Star:

In a tweet sharing his U.S. House floor speech, Massie said, “A federal red flag law would create millions of second-class citizens. It won’t stop mass shooters but will deprive millions of Americans of due process and their Second Amendment rights.”

A federal red flag law would create millions of second-class citizens. It won’t stop mass shooters but will deprive millions of Americans of due process and their Second Amendment rights. pic.twitter.com/iGazkfwUwK

Massie made the point that while everyone wants to stop mass shooters from committing their atrocities, the idea of stopping future crimes doesn’t work in film or real life.

“Everyone wants to stop mass public shooters, but we haven’t previously punished people merely on the basis of a hunch, and we shouldn’t start now. Stopping future crimes doesn’t work in the movies, and it doesn’t work in real life,” Massie said.

“What can work is providing mental health care and counseling to those who need it. If people truly pose a clear danger to themselves or others, they should be confined to a mental health facility. Simply denying them the legal right to buy a gun isn’t a serious remedy. Actually, it’s already possible to take a dangerous person’s guns away,” he said.

Massie discussed how involuntary commitment laws, such as Florida’s Baker Act, are ignored by Democrats in the red flag law debate.

“But Democrats are completely ignoring involuntary commitment laws that are on the books in all 50 states presently, known as the Baker Act in Florida, or the 5150 code in California. These laws are different than the ones that are proposed today in one very important aspect: they involve due process,” he continued.

The Kentucky U.S. representative made the point that red flag laws can and do put lives at risk, including the lives of police officers.

“And there’s pre-dawn raids that endanger the lives, not just of the person we’re worried about, but of the officers who are tasked with carrying out the raid. Red flag laws could actually increase the rate of homicide and suicides,” he said.

Massie wants Americans who need mental help and mental healthcare to come forward to talk about their issues in order to overcome it, but stresses that individuals will be reluctant to do so under red flag laws.