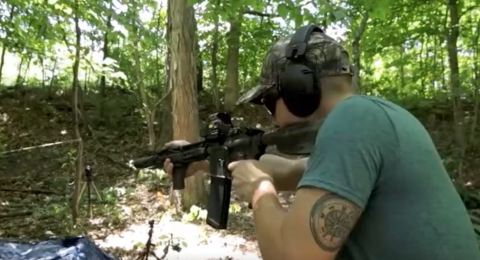 A Dem. Congressman rallies for a enormous tax to be put on the purchase of AR-15 style guns. The 1,000% tax will raise the price of a typical $500 AR style gun to about $5000. This tactic is to keep younger customers from being able to purchase these style of weapons. Read more from MRCTV below.
From MRCTV:

What at first blush looks to be a frivolous and toothless stunt to crush the Second Amendment beneath an excise tax actually could pass the U.S. House of Representatives, claims the headline, via Business Insider, and Senator Liz Warren (D-MA) indicates that she can get behind it.

Business Insider’s Joseph Zeballos-Roeg explains that the proposal, fashioned by Rep. Don Beyer (D-VA), would use the constitutionally-granted power to inflict excise astronomical taxes on internally traded U.S. goods in order to destroy the “protected” right to keep and bear arms.

The details of the bill are sketchy, but the tactic is clear.

It’s a tactic that the Dems and Joe Biden (along with a bunch of RINO Republicans) already utilized in April, when they passed their barmy and ludicrous “H.R. 7108 Suspending Normal Trade Relations with Russia and Belarus Act” – because, of course, you cannot be free to decide what to buy. You have to buy weapons that the U.S, will send to Ukraine.

That ingenious bill raised the tariff from 11 to 30 percent on Russian and Bellarus-made ammo.

Like the tariff “power,” this new tax proposal also is listed as a Congressional power in the U.S. Constitution. It’s the excise tax.

But there’s a problem. As the Washington administration realized when “Treasury Secretary” Alexander Hamilton led the government into the folly of imposing a disproportionate excise tax on whiskey – something that slammed rural farmers and whiskey-makers much harder than mechanized and internationally-trading northeastern whiskey interests – the Constitution offered no answer as to how the feds could collect any of its excise taxes should people not willingly cough up the cash.

When, in 1793-1794 whiskey-makers in western Pennsylvania, Kentucky, and other agricultural zones refused to pay, Hamilton ordered the Pennsylvania governor to arrest the tax-dodgers in his state, and the Treasury Secretary actually claimed that they were engaging in an “insurrection.” When the governor did not act, Hamilton convinced a judge who was a close friend to claim that the whiskey-makers were rebelling, and Hamilton used that as a pretext to, along with Washington, lead a force larger than the Army of the Potomac across Pennsylvania to attack the tax targets.

The problem is that, not only does the federal Constitution offer no way to collect the excise taxes the Congress imposes, the Constitution requires a state Governor or legislature to ask for federal assistance if they believe the state is besieged by insurgents or rebels.

In the end, public hatred of what Washington did led him to issue pardons, and, as economist Murray Rothbard observed:

But this is what the Dems in the House seem to want to apply to those trading in AR-15s. And Warren seems eager to get behind it, as well.

This, after she voted to send millions of dollars worth of weapons to Ukraine.

Of course, this is “banning” by another name, and it won’t work.

As the tax burden on any popular item rises, the incentive to move sales into the black market also rises. Dealers and consumers weigh the relative costs and benefits, risks and advantages, and they make their choices. That’s why, when I worked at a television series in Vancouver, circa 1996 – a time when Canada had raised the tax on cigarettes  so high, it inspired an underground for sales — I used to hear radio reports about the Royal Canadian Mounted Police capturing truckloads of “smuggled cigarettes” bound for black-markets.

The problems of taxation are manifest, but the key is that it is immoral to force others to pay you when they engage in peaceful trade.

What’s the difference between the two forces except the mask of “legality?”