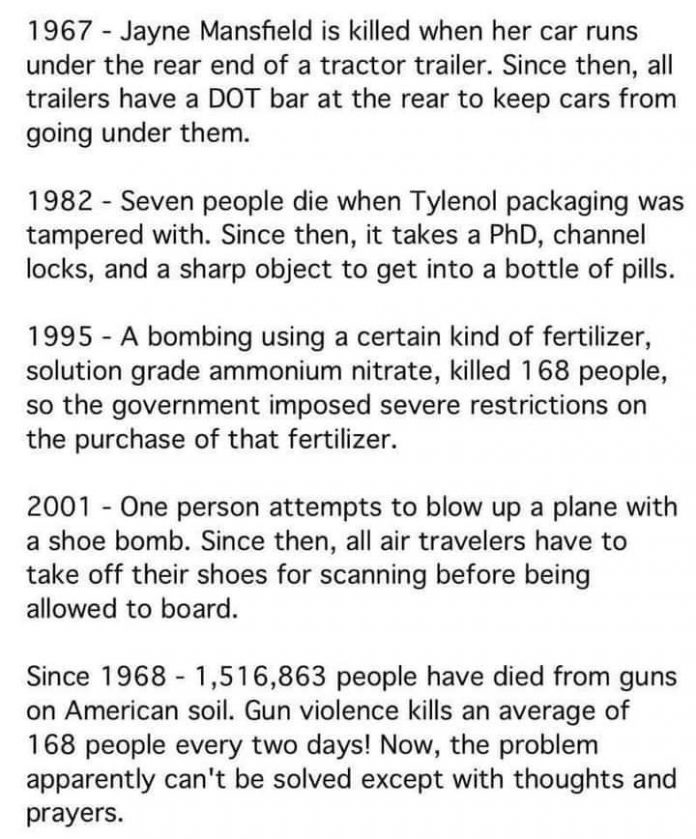 This particular hot take crossed my feed this morning and I am… just tired of it. Friends of mine of more liberal persuasions have been hot posting, understandably, on gun control since the recent violence in Buffalo and Uvalde. Those two incidents represent some of the worst excesses humanity is capable of, they were committed by teens who had barely reached adulthood, and they were against two vulnerable populations, a largely elderly African American shopper crowd and children.

Add to that the fact that Crime rose under the pandemic conditions and we are seeing the result unrest continue to manifest in daily events. I don’t think we’ve peaked yet from the point/counterpoint rise from the riots, January 6th, the economic shut down, and now inflation.

However righteous anger at an issue does not make you right in your analysis. Righteous anger does not make an ineffective effort effective. Regardless of how correct being upset is at a circumstance in our lives, it does nothing to improve the efficacy of a response.

Let’s tackle the suppositions in this hot take. The first is that Universal Background Checks and Red Flag laws do not have significant flaws in their implementation, execution, and enforcement. With UBC’s, its compliance. Not merely noncompliance by nefarious forces circumventing the law, which would remain absurdly easy person to person, but people who just can’t be bothered to. With Red Flag laws the premise is even murkier since Red Flag are guessing at future behavior that hasn’t risen to criminally violent yet. The false positive rate on Red Flags is going to be absurd, the people falsely accused and negatively affected by this are going to create light years of litigation, and all of this still might be an acceptable policy if it had a snowball’s chance in hell of having high efficacy against the violent outliers.

But it doesn’t. Red Flag is a shot in the dark where we would need to be willing to accept a variable consequence of inconvenience to active harm against a large group ‘flagged’ persons, who will be mostly false positives, in order to try and catch the miniscule percentage of them who would transcend the Red Flag behavior into active violence. We must also recognize that there will be circumstances without warning signs and that current ‘Red Flag’ laws that are in place, like New York with friendly legislatures towards these policies, the laws failed. We have a long list of individuals who were ‘known’ to authorities but nobody asks how many people are ‘known’ to authorities in some manner.

So, in the raw, the hot take is narrowly correct. If you wouldn’t pass a UBC (which is just a regular background check, nothing magical there and 77% of mass killers passed theirs) or be put onto a red flag list (which in jurisdictions with them are rarely used because of the glaringly obvious civil rights issues of overuse) we do not want you purchasing a gun. That is correct.

The problem is that isn’t the criticism. The assumption in this post is that pro-gun folks believe it will create an “insurmountable barrier” to gun ownership. That isn’t it at all. The problem is it makes literally no practical barrier at all. It’s only effect is to inconvenience or actively harm the already reasonably compliant while hoping and praying you snag up any active killer who will be actively trying to circumvent these prohibitive steps.

You might, if you’re lucky and they are a particular brand of dumb, get them to tattle on themselves. However that begins running into other civil rights problems, particularly entrapment and agencies justifying there existence.

Remember the Michigan Militia that was going to kidnap the Governor? And there grand alleged plan was to take her to the non-extradition territory of… Wisconsin… Remember when that whole thing fell apart because it turned out that all the people actively encouraging the plot worked for the government? That’s entrapment, the government can’t encourage you to do crime and then arrest you for it. They can only pretend to be someone you need to do the crime, like a weapons dealer or someone who owns a property. They. Can’t. Encourage you.

But they do. So they can get big arrests and make big headlines for stopping big plots.

So on this one, it isn’t that UBC’s and Red Flag create insurmountable barriers. It’s that they create no barrier to the events you are trying to prevent. None at all. There are a myriad of easy and immediate workarounds for anyone so motivated towards violence.

Excellent. That is a small design change that can be universally implemented across a fleet of similar commercial vehicles that can improve fatality/injury stats for trucking. How is that working out?

Huh, trucks still kill people. Addressing one method of collision death and injury may have curbed a single avenue, and in the context of the number of things we can control in public shipping because it is standardized and on the highway system, it did not stop fatalities. It probably didn’t even impact fatalities enough to move outside year over year variances due to other causes.

Putting aside the hyperbole, we are again within a easily regulatable space, producible to a standard, and to a prevent or indicate deliberate tampering with an over the counter medicine, we were able to make a positive change and lower the risks of children getting into medicine packages and have an easily identifiable way to see if a medicine shouldn’t be trusted due to tamper seals. We have them on the majority of consumables now.

Easy change, demonstrable positive benefits. It isn’t even claiming that it alone is preventing someone else from tampering with medicine in the future, but instead making it more obvious to a consumer if someone did.

Here is where the analogy falls off the rails. The Oklahoma City Bombing is a deliberate event with a complex motive. It is an outlier event. It remains the second deadliest terrorist incident in US history, second only to 9/11.

The false presumption in the post is that because of the new regulations on fertilizer, no bombings have taken place since. This false attribution, that because we monitor fertilizer nobody could build effective HME (Homemade Explosives), is asinine. What we haven’t manifested again, thankfully, is the proper combination of motivations and ability to employ HME in effectively. HME is stupid easy to make, it was the number one casualty causer in the Middle East and made by illiterate third worlders. If you believe that because we have a rule about fertilizer bombings are rare, I am sorry. Bombings are rare because they are rare, the motivation to kill and destroy on that scale manifests in extremely rare circumstances and usually for extreme grievances, perceived or otherwise.

In the case of Timothy McVeigh, it was Waco and Ruby Ridge. The stated motive was retaliation against the Federal government, whose actions had killed 76 people in Waco over an alleged firearm law violation. McVeigh visited Waco during and after the siege, it was his final catalyst.

Now, how do you put a crash bar or a tamper proof seal on outrage? How do you curb the motives for a complex attack with a narrow rule monitoring a commercial product, one of many, that can be turned into an explosive?

Okay, that was straight forward. It prevented bombing attempts after that on planes, right?

Umar Farouk Abdulmutallab (Arabic: عمر فاروق عبد المطلب ; also known as Umar Abdul Mutallab and Omar Farooq al-Nigeri; born December 22, 1986)[3][4] popularly referred to as the “Underwear Bomber” or “Christmas Bomber“,[5] is a Nigerian-born terrorist who, at the age of 23, attempted to detonate plastic explosives hidden in his underwear while on board Northwest Airlines Flight 253, en route from Amsterdam to Detroit, Michigan, on December 25, 2009.[1][4][6]

Also what is the plan, in a TSA check line full of people if someone does have a shoe bomb inside the scanner machine? What if they attack the checkpoint instead of the plane? So again, false positive attribution. We did a thing and because nobody has been motivated enough to attack with a bomb in this specific manner again we assume instead that we’re “preventing” it. Meanwhile, active “preventions” are through the efforts of agencies monitoring traffic of high risk individuals and groups and hoping they catch the right message posted at the right time about an event to intercede. Sometimes it works. Sometimes it doesn’t.

But don’t tell me the TSA is ‘preventing’ anything. Best case scenario is that checkpoint is a speedbump. Worst case scenario, an intelligent enough and motivated enough individual just uses one of the numerous ways to go around them. Lucky for us, most criminals want the easiest pathway to money for the least risk and angry extremists have a tendency to be dimmer bulbs than average. We can’t rely on it though. But that’s what this post line is doing, relying on the rule because of lack of repeat event while ignoring comparative events.

So now that we’ve torn apart the relevancy of the analogies and shown the glaring error in trusting the TSA and a rule on fertilizer purchases to stop extremists with plenty of other avenues to cause havoc, why should I care about the thoughts and prayers line? The hot take falls apart under critical analysis and we come to realize that a lot of our security measures are just that… its thoughts and prayers. It’s the thought, that under ideal circumstances and low amounts of human error, we could detect an event and the prayer that all perpetrators are too stupid or unmotivated to circumvent them.