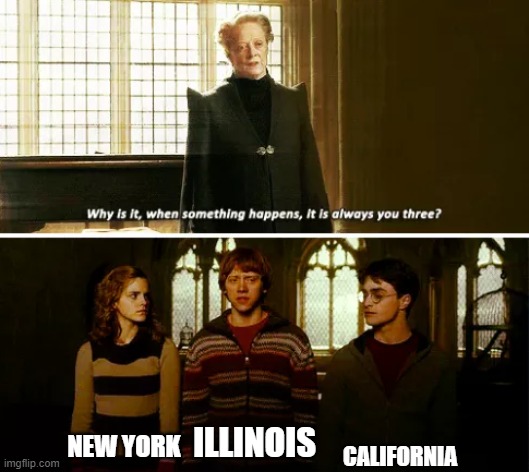 NPR hasn’t been my favorite news source for awhile, but that doesn’t mean we shouldn’t be paying attention to them. They have an aggressive anti-gun bent but that just means they are going to be a very loud source of information on anti-gun legislation. That is a topic I do want to know about. Yesterday New York passed a bill to raise the legal age to purchase semi-automatics, because their assault weapon ban failed them, to 21. The Governor, Kathy Hochul, has indicated she will sign the bill and make it law and has supported its passage.

New York, California, and Illinois love their marathon to infringement. They’ve never seen a gun control measure they hate, regardless of how absurd. It is a sad state (or three) for the nation that we are looking at alarmist solutions.

I will give some credit here. Of the bad ideas that won’t actively hinder a motivated outlier, this one at least has a few points of factual merit.

From the psychological and reasoning developmental aspects of humanity, 21 is more mature than 18. The age of 25 has been posited as the pinnacle developmental point for modern humanity where our social learning, cognitive strengths, and reasoning powers top off their final major growth spurt. We can obviously keep learning as adults, experiencing new things, new ideas, and adapting to new changes in our environment. But biologically are body is out of its tutorial phase where we are absorbing all the information to build or social responsibility structure and have, in theory, a pretty good grasp on things.

Most people’s late 20’s are where they end up in serious “getting my shit together” mode while the early 20’s and late teens tend to be far more awkward puppy with too big of paws, but in a societal setting. We dump adulthood (most of it) right into the middle of this cognitive growth period, actually the early third, and tell a ton of kids their on their own.

So, from a stratospheric analysis of the concept, making the age for adulting 21 has merits. Notice I say adulting, and not just firearm purchases. If we’re serious and want to do this, do it for everything.

Fill the time gap with community or trade education so that at 21 we have a crop of well educated burgeoning professionals who can support themselves with skilled labors. Associates degrees and all manner of trades can be covered in that timeframe with some room to get started working.

But no, New York is not doing that. New York isn’t changing how they see the adult developmental arc, they are trying to remove a method of injury for outlier events. They are doing so poorly. For the specific events they are trying to defend against, motivated killer, the rule won’t do anything. The two of the last three high profile mass killings were by 18 year old perpetrators, but the third was a 45 year old. A man who was actually outside the majority arc for all violent activities. He killed his surgeon, some other staff in the office, a bystander, and then himself. How does this law prevent that event? Those deaths?

The reason the law fails to achieve its goals, and why it should therefore be crafted differently or discarded, is because it addresses the wrong issues. We don’t have a problem with AR-15’s. We have a problem with an on edge society finding the most convenient method of injury to get their violence on, and outliers who believe doing so solves their problems. Changing the age neither solves the problems nor treats a symptom. It just looks like it does on paper. Its a placebo. It is public safety theater even more than the TSA.

Banning semi-autos to those under 21, or requiring a license, or any other inane method of window dressing public safety efforts will fall flat again the next time the next person chooses a remotely convenient method of injury to get their mad on. Like, hooray we made it more illegal to murder a bunch or people. Go us.

So you want to yank back all of the protective panels parents bought for their children since the state has proven time, and time, and time again that they can’t stop these events? You want to ban the one piece of genuine extra protection a parent can give their student?

Why? Body Armor panels aren’t magic. They are an extra few seconds of safety and injury avoidance. Yes, that can be used by an evil person just as well as a good person. Body armor is just as inanimate as a firearm.

However, like firearms, body armor is already out of the bag. It isn’t serialized or trackable. How do you propose making it illegal to be armored is going to be any more effective than making it slightly differently illegal to be armed is? Are we hoping the motivated killer is going to listen to that part of the law? Are we actually just hoping that the next determined individual just magically, through the grace of raw chance, was prevented from buying armor or a repeating firearm, didn’t acquire them any other way, and is able to be interdicted by the police effectively?

Another state looking at this pipedream technology that will slowly squeeze legal firearms out of existence. That’s it, that’s its trick and gun controllers aren’t shy about admitting they will settle for a slow ban. A slow ban that they can put more pressure into every time it fails to do the thing it can never do, stop the free agency of a killer.

Microstamping doesn’t work, that’s why the approved handgun list keeps dwindling in California. What is microstamping going to do anyway? Oh yay, a partial and illegible imprint of the serial number on the brass case. It isn’t GPS coordinates to a killer. California’s last 10 years of violence still hover at about a 45% clearance rate on cases, up and down a point or two. Did microstamping move the needle at all? Doesn’t appear to have, it simply banned handguns slowly to make it more palatable. The violent portions of California are still violent and the peaceable are still peaceable. Meanwhile people flee the state because you can’t afford to stay.

New York already requires people to be 21 to possess a handgun. Younger people would still be allowed to have other types of rifles and shotguns under the new law, but would be unable to buy the type of fast-firing rifles used by the 18-year-old gunmen in the mass shootings in Buffalo and at a Texas elementary school. -NPR

It took precisely zero seconds of effort to find a lethally effective and legal workaround for this rule. We don’t even need to discuss the illegal ones. We act like we are damming a river, when in reality its about as effective as shutting a screen door underwater to try and keep out a little bit of bad water. It’ll matter less than a fart in a windstorm to the next motivated bad actor. We are focusing our time and efforts in the wrong places. We aren’t tackling the motivations for violence by encouraging good living. Instead we continue to politically profit off cheap divisions and wonder why kids have more stress and less hope today.