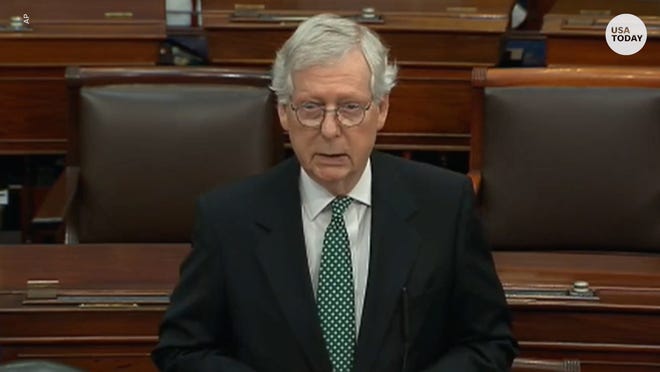 Gun control has been a constant conversation since the tragic Robb Elementary School massacre. Senate Republican Leader Mitch McConnell has stated that he want GOP lawmakers to work with Democrats to address this situation. Continue reading this story from the Courier Journal:

The movement is no guarantee that action will be taken.

McConnell has consistently voted against stricter gun regulations throughout his decades-long career, including in the aftermath of repeated mass shootings when demands for lawmakers to take action crescendoed as they have now after Uvalde.

For example, after a gunman killed 20 children and six adults at Connecticut’s Sandy Hook Elementary in 2012, McConnell led the largely Republican filibuster of bipartisan legislation that would have closed loopholes concerning federal background checks for gun sales.

Asked this week if he thought the potential areas of compromise would include red flag laws, background checks or mental health access, McConnell said he’s asked Cornyn “to meet with the Democrats who are interested in getting a bipartisan solution and come up with a proposal, if possible, that’s crafted to meet this particular problem.”

Red flag laws generally permit police or family members to seek a court order to temporarily confiscate firearms from a person who may present a danger to others or themselves.

Any bipartisan compromise on background checks, red flag laws or firearms access could mark a substantial victory for gun control advocates who have seen Congress do very little following previous mass shootings such as Sandy Hook Elementary, the Pulse Nightclub in Orlando and Marjory Stoneman Douglas High in Parkland, Florida.

Guns became the top cause of death for children and teens here in 2020, according to research that used Centers for Disease Control and Prevention data.

“And there’s a clear correlation that the more regulations that are in place, there is a definite reduction in gun injury and death,” said University of Louisville political science professor Melissa Merry, who has studied how gun rights and gun control organizations frame issues of gun violence.

Democrats, who hold 50 seats in the Senate, need at least 60 votes to defeat a filibuster and bring legislation to the floor. So any proposal will need the support of at least 10 Republicans, most of whom have shown little appetite to go against the gun lobby and restrict access to firearms.

If there is to be a deal, it won’t happen without McConnell.

A longstanding opponent of strengthening gun regulations and winner of the National Rifle Association’s “Defender of Freedom” award, the seven-term senator from the Bluegrass State controls how much his caucus is willing to venture on gun legislation.

For his opposition, McConnell has been deeply rewarded by gun support groups.

According to the nonprofit OpenSecrets, the NRA had contributed $1.3 million in support of McConnell since 1989. (McConnell joined the Senate in 1985.)

Whether McConnell and the Senate Republican Conference he leads will finally agree to pass new gun regulations this time around, after years and years of blocking them, remains to be seen.

“Hopefully, we can get an outcome that can actually pass and become law rather than just scoring points back and forth,” McConnell told CNN Thursday.

McConnell’s comments came a day after several Democrats expressed pessimism that Republicans would be open to substantial movement on guns even with the horrific tragedy of Uvalde on the nation’s conscience.

“(Republicans) are disturbed, upset, troubled but not willing to change where they are,” Delaware Democrat Chris Coons said Wednesday. “This is a bad day for anything even vaguely looking like hope or optimism around legislative process or progress.”

“I think we have to at least listen to each other and see if there’s a path forward where, we might be able to find solutions that actually address the problem,” he told Capitol Hill reporters. “Too often, in these debates, at least my experience is people come up with lots of solutions to problems that either don’t exist or weren’t the cause.”

Disagreements like the one Thune alluded to, about what ‘solutions’ are appropriate, have ended in inaction again and again in Congress over the years, with McConnell and other Republican senators repeatedly preventing new gun regulations from passing.