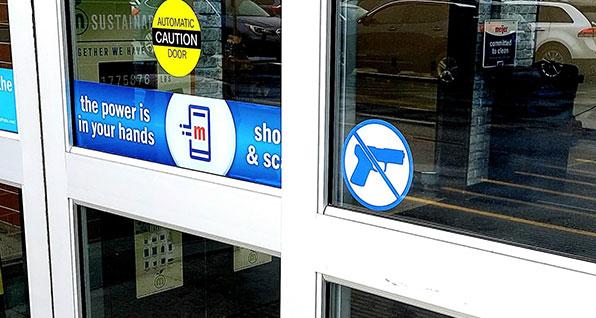 Permitless carry is now the law in Ohio and that will undoubtedly cause some changes. Meijer grocery stores in the state have begun posting up blue signs in the form of a silhouette of a firearm crossed out by a bar. Continue reading this article from the Buckeye Firearms association:

Not long after the Buckeye State went permitless on carry regulations, Meijer grocery stores started posting blue signs in the form of a silhouette of a firearm crossed out by a bar.

The problem is, these signs are not the typical signs as prescribed by Ohio law for those who wish to prohibit on-premises carry. So what do they mean?

Upon seeing this sign, Ohio patriot Craig Fritz, a Lifetime NRA and Second Amendment Foundation member, and annual member of the Ohio Rifle and Pistol Association, snapped a picture and got to writing.

Fritz was moved to reach out to the grocery chain and ask them about their policy. In return, he received a reply basically telling him the 2nd Amendment does not exist within the walls of the grocery store because of “feelings.” From the email Fritz received:

While we respect the protected rights of all our customers and team members, we want to ensure a shopping environment that is safe and welcoming for everyone.

It’s not necessary to dive into the flaws in that statement or that line of thinking. The stance of this representative speaks for itself.

After learning of this situation from Fritz, I reached out to Meijer for clarification and comment. My correspondence yielded a similar response, followed by crickets when upper management was challenged on this policy.

Some of what I said in my first email, followed by their reply:

Petrolino: Given the company’s policy, what has your organization done to ensure the safety of your customers? Are you employing armed guards that will make sure anyone that is subject to criminal attacks will be protected? Any elaboration that you can provide which will let my readers and your customer’s know that you’re taking accountability for everyone’s safety would be appreciated. What further efforts has your company made since you expect customers to remain disarmed and unable to self-defend?

Meijer Rep Judy: I apologize for your recent experience regarding our gun policy. Providing a positive customer experience is a priority at Meijer and I would like to thank you for taking the time to communicate your concern. If we plan to succeed in the future, we depend on our customers to provide us with their honest feedback.

I am forwarding your concern to our Store Director for further review. Please expect to hear back from them directly.

I sincerely hope we have the opportunity to serve you again in the future. We appreciate your business.

There was some more back and forth, and finally I was directed to two individuals; the Senior Director of Communications (Frank Gugliemi) and the Public Relations Manager (Joseph Hirshmugl).

In my correspondence, I sent my original statement, but also included scores of examples of criminal activity, attacks, etc. that have been documented to have occurred on Meijer property. My reply from them? Crickets. I followed up several times, asking for comment prior to releasing any articles on the topic.

After publishing this account over at Bearing Arms, where I freelance, Fritz did continue to voice his opposition to the policy to the company. In an email from a representative named Shiloh, they referred to the policy a bit differently. It was named an “open carry policy,” which is peculiar.

Trending in 2018 was news about Meijer adopting a “no open carry policy.” Does the representative have their facts about carry straight? Do they have a 100% disarmed policy? It’s hard to tell when the posted signs do not match standard no-gun signs and the heads of the communications departments at the chain refuse to reply to correspondence and explain their intent.

Another interesting grub that was sent to me by a tipster, is that Republican Representative Peter Meijer of Michigan’s 3rd district is a member of the same Meijer family (the tipster used the word RINO to describe him). Given Meijer’s alleged conservative roots, one would think that his family’s business would embrace ideals that are pro-freedom. Looking up Representative Meijer’s voting record might paint a picture that people reading this might not get behind. The freshmen congressman has already amassed an interesting record.

What can we do? First and foremost, if you don’t like the storie’s policy, especially because the signs are not clear, don’t shop at any of the Meijer Grocery Stores.

With that being said, regardless of your continued or discontinued patronage of the chain, let your voice be heard! I urge you to reach out to the customer service representatives of the Meijer company, and let them know your stance on their policies. Be polite, but be direct. Point out that grocery stores are targets for both criminal and terroristic events, as illustrated recently. Let them know that so-called “gun free zones” are not gun free to criminals.

The Grocery chain can be reached online or via telephone, 1-877-E-MEIJER (1-877-363-4537). The chain does not have a post address listed for snail mail correspondence, however sending letters addressed to co-chairman and CEO Hank Meijer at their headquarters might get you a little attention.

If you’re feeling particularly brazen, reach out to Representative Peter Meijer over in neighboring Michigan and ask him if he agrees with the policies set forth by the family business. Representative Peter Meijer’s father is Hank Meijer, the current co-chairman and CEO of the chain. It should be understood that what his father does has nothing to do with him, but asking him his stance and position statement on the practice is worth exploring and warranted. The Congressman can be reached online or via post/telephone at the following addresses:

My advice? Do all of the above. Start a little letter writing campaign to Hank Meijer and Representative Peter Meijer, as well as call and email the Meijer customer service department and the Representative’s office. Hit up Twitter too! @MeijerPR @meijer and @RepMeijer .

This charge goes out to all gun owners, not just those in Ohio! We all deserve to be heard as Second Amendment supporters. Remember to play nice in your correspondence and best of luck!

John Petrolino is a US Merchant Marine Officer, writer, author of Decoding Firearms: An Easy to Read Guide on General Gun Safety & Use and USCCA certified instructor, NRA certified pistol, rifle and shotgun instructor. You can find him on the web at www.thepenpatriot.com on twitter at @johnpetrolino on Facebook at https://www.facebook.com/thepenpatriot/ and on instagram @jpetrolinoiii.