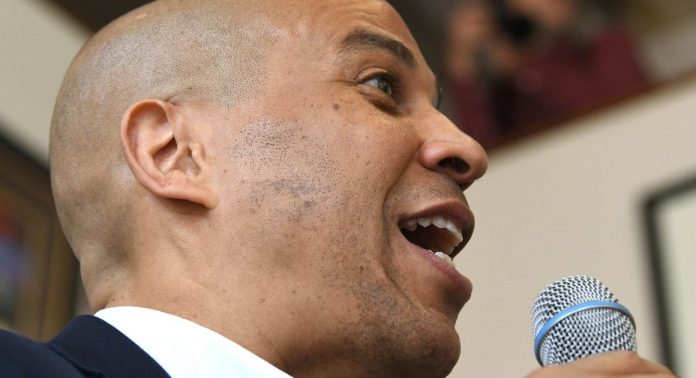 Washington, D.C. — After another series of deadly mass shootings across the country, U.S. Senators Cory Booker (D-NJ), a member of the Senate Judiciary Committee and Chair of the Subcommittee on Criminal Justice and Counterterrorism, Bob Menendez (D-NJ), and Richard Blumenthal (D-CT) today reintroduced the Federal Firearm Licensing Act, legislation that would require individuals to obtain a firearm license from the Department of Justice (DOJ) before purchasing or receiving a firearm.

Yep. I’m sure that will work. Terrorists would never ignore a licensing law, nobody under the age of 21 has ever gotten their hands on a gun, and background checks catch people without disqualifying backgrounds. FBI NICS never makes mistakes ever, law enforcement certainly don’t have a rolling history of having ‘known’ about problematic individuals, who later committed atrocities, but they couldn’t be bothered to deny them in NICS. It’s perfect.

In other news, the sky is now confirmed to have been maize in color the whole time. All folks who claim to see blue are just wrong, sorry.

This bill really is a whole sack of stupid.

Applications directly to the DoJ for a firearm ownership license, five year renewal timeframe. Mandatory, absurdly easy, time wasting training to make sure fewer people renew because it is a pain in the ass. FBI oversight, like they have that kind of time on their hands and a sufficient resource pool. I’m sure they have the bandwidth for 100 million new licensees though. It’ll be fine.

Oh and how are we fixing background checks? DOUBLE BACKGROUND CHECKS! Twice the hassle, same information both times.

Terrorists, your game is through. Now you have to answer to… the 4473 and NICS, but like… again. Two times.

Let’s get into this soup sandwich from Booker’s Senate site,

Several studies have shown that licensing laws reduce gun violence in states that have enacted them. According to the Giffords Law Center, Connecticut saw its gun homicide and gun suicide rates decrease by 28 and 33 percent, respectively, after passing a state licensing law. In contrast, after Missouri repealed its firearm licensing law, the state saw a 47 percent increase in its gun homicide rate and 24 percent increase in its gun suicide rate. Licensing laws also enjoy strong support from Americans, with 77% backing the measure according to a Quinnipiac survey from 2019.

So many red flags on the field.

Lets start with ‘several studies‘ show. Of course he references the Gifford’s Law Center and its impeccably impartial data [/sarc].

So yeah, please disregard those studies unless you can prove they are one of the 0.4% with sound methodology, Senator. You won’t. But I’m still going to be a voice of skepticism and say I’d put my money on your studies not making the cut.

Next claim, ‘Connecticut saw a 28% drop in homicides and 33% in suicides…’

Connecticut seems to be following the national trends so it seems highly unlikely that your ‘license’ law did much and we can chalk the positive results up to positive social trends.

Then we throw Missouri under the bus, completely disregarding its different socio-economic status and placing it 1:1 with Connecticut. Political science is fun, isn’t it? No controlling for variables, just get a number and make it about the thing you want.

Finally, the 77% backing by the US Population in a Quinnipiac survey… from 2019.

Where is that 77%, Cory? This is starting to feel like that ‘girlfriend from another school’ folks would make up to sound cool. We are also well aware that support for any proposal is as easy as manipulating the language in a binary survey, especially to those ignorant of policy as it stands.

“In our nation, gun violence has become eerily routine and we’ve done little to stop the horrific mass shootings that devastate the lives of victims and their loved ones,” said Sen. Booker. “Accepting this shameful status quo will continue to lead to deadly consequences. We need to adopt proven, common-sense measures that will address the scourge of gun violence and make our communities safer.”

What is proven? What is ‘common sense’ about this policy? What expert or study are you citing that has been peer reviewed and taken apart to find the flaws, Cory? Which one? Another of the nearly 28,000 studies that failed academic scrutiny at better that 99 times out of 100? 99.6% useless and could not draw a reasonable conclusion.

“This bill moves us in the right direction and is based on a simple concept – if you need a license to drive a car, you should need one to buy and possess a gun,” continued Sen. Booker. “Firearm licensing laws have broad public support and have been shown to reduce gun violence in states that have enacted them, including in my home state of New Jersey. This is the moment to enact ambitious legislation – as a nation, we must rise to it, or we are fated to witness the deadly scenes of this past weekend and years past over again.”

It is a simple concept that is blatantly illegal and violates the Constitution. Also, who do we think this will negatively influence the most? If you said the ‘African American and other poor and/or minority communities’, you’d be correct. Exacerbate the racial and economic criminal disparity by inventing more crimes? Cory Booker is your guy.

“The United States stands alone in our failure to protect our citizens from gun violence. While many states, including New Jersey, have commonsense gun laws, the need for federal licensing standards has long been clear,” said Sen. Menendez.  “The Federal Firearms Licensing Act would put in place a certification process that includes firearm safety training and a thorough criminal background and identity check requiring the licensee be 21 years of age. We have a moral obligation to prevent these senseless massacres in our schools, supermarkets, places of worship and shopping malls that are tearing communities and families apart.  It is my hope that my Republican colleagues will once-and-for-all recognize the urgency of action and join us in passing this legislation before more lives are senselessly lost to gun violence.”

Ah, Senator Menendez. Thank you for joining us with your asinine assertions. Let me point to a few reasons why you are wrong.

1987 Hungerford massacre; the 1996 Dunblane massacre the 2010 Cumbria shootings; and the 2021 Plymouth shooting in the United Kingdom; the 1990 Puerto Hurraco massacre in Spain; the 2001 Zug massacre in Switzerland; the 2002 Erfurt school massacre, the 2009 Winnenden school shooting, the 2011 Frankfurt Airport shooting, the 2016 Munich shooting, and the 2020 Hanau shootings in Germany; the 2007 Jokela school shooting and the 2008 Kauhajoki school shooting in Finland; the 2010 Bratislava shooting in Slovakia; the 2011 Alphen aan den Rijn shopping mall shooting in The Netherlands; the 2012 Toulouse and Montauban shootings, the January 2015 Île-de-France attacks and the November 2015 Paris attacks in France; and the 2018 Macerata shooting in Italy. The deadliest mass shooting by a lone individual in modern history occurred in Europe with the 2011 Norway attacks in Norway, in which 77 people died.

Bataclan in 2015, Paris France, killed 130 people (and then the 7 attackers). So it turns out violence is not unique to the United States, weird.

Oh, and one more. Just a single word.

So I hope that your Republican, and Democrat, colleagues tell you and Cory to pound sand.

“This legislation will save lives and protect communities across the United States from the devastating impact of gun violence,” said Sen. Blumenthal. “As shown by the success in Connecticut, simple, common sense standards like licensing laws requiring the completion of a background check and firearm safety certification work. I’m proud to join Senators Booker and Menendez in this effort to address our nation’s gun violence epidemic.”

Senator Blumenthal, welcome to the nonsense. What astounding success in Connecticut? Sure the homicide rate is below average but it tracks with the national trend. You’re also in a state with a much higher than median average income. No? That would be ist-ish or phobic to imply? Connecticut residents earning, on average, 21% more than the national average, could that have something to do with lower rates of violence or no? Economic stability isn’t a substantial social factor in determining likelihood of use of violence as a currency, right?

Here’s the three points of stupid.

In order to obtain a federal firearm license, the bill would require the following:

So pretty much exactly what we’ve had piecemeal around the nation for concealed carry permits for decades and states are increasingly dropping that requirement because the licensure was just a pain, a waste of state time and resources, and a violation of the state resident’s civil right to be armed.

The federal firearm license must be renewed every five years at which point the applicant will have to go through a background check and undergo firearm safety training again.

Cool, more hassle to get those numbers down. Especially among the poor and minorities. Good ole class warfare and you’re even saying this is for their own good, fantastic.

The bill contains a mechanism for the DOJ to revoke the license if the individual poses a danger to themselves or to others.

Woohoo! Red flag laws at last. I’m sure since personal protective orders have never failed to protect their subject or been used against someone maliciously and slanderously that this will work out just fine.

It would require the Federal Bureau of Investigation to regularly conduct checks to ensure that individuals are in compliance with federal license requirements and keeps in place requirements that all people purchasing firearms from a federal firearms licensee undergo a background check.

And of course an enormous bureaucratic oversight burden on the FBI.