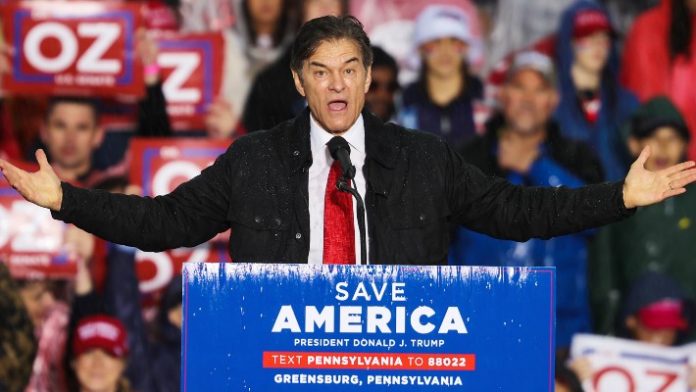 Dr. Oz is looking to court votes with the 2nd Amendment crowd by promoting the endorsement he received from none other than Ted Nugent. Nugent, a known gun lover, has given his endorsement to Dr.Oz ahead of next week’s primary. Continur reading this story from UPROXX:

Despite securing an endorsement from Donald Trump himself in the GOP primary for an open senate seat in Pennsylvania, Dr. Mehmet Oz is somehow staring down a potential upset from GOP rival Kathy Barnette, who’s being attacked by the likes of Sean Hannity for being “Ultra MAGA.” Apparently, there’s such a thing as being too Trump-like. Who knew?

With less than a week to go until GOP voters cast their decision, Oz is hoping to woo the Second Amendment crowd by letting everyone know that he has the full backing of noted gun lover Ted Nugent.

With less than a week to go, Mehmet Oz wants to emphasize to PA voters that he is the only candidate that has secured the coveted endorsement of Ted Nugent. pic.twitter.com/M47leUxVhZ

On top of making media appearances touting his gun-loving bonafides, Oz’s official Twitter account is getting in on the action by, again, touting his Nugent endorsement as well as fellow gun lovers Rick Perry and, of course, former president Trump. (Serious question: Has anyone actually seen Trump fire a gun? You’d think that’d be an easy image/video to find.) Oz also vowed to always “defend our #SecondAmendment rights.”

Of course, the big question is whether Oz’s big second amendment push can overcome Barnette’s “Ultra MAGA” rhetoric, which has oddly earned her a rebuke from the top MAGA King. After endorsing Oz, Trump has lashed out at Barnette’s recent surge in the polls. However, he also promised to back her should she win the primary. It’s all very weird.

“Kathy Barnette will never be able to win the General Election against the Radical Left Democrats,” Trump wrote in statement. “She has many things in her past which have not been properly explained or vetted, but if she is able to do so, she will have a wonderful future in the Republican Party-and I will be behind her all the way.”