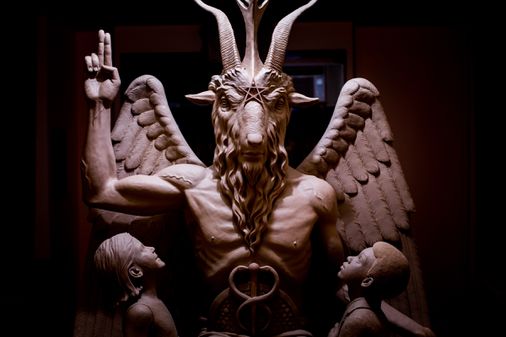 Religious freedom has been a hotly debated issue for many years. The Satanic Temple is once again in the news for using the courts ruling to advocate for their right to have their flag flown at the Boston city Hall. Continue reading this story from The Boston Globe:

Guess the Prince of Darkness wants a little publicity.

The Satanic Temple has applied to fly its flag at City Hall Plaza — a move made immediately in the wake of an unanimous US Supreme Court ruling earlier this week that found the city of Boston violated the First Amendment rights of a Christian group by refusing to fly a flag bearing a cross outside City Hall in 2017.

Lucien Greaves, a co-founder and spokesman for the Salem-based organization, said in a statement “It’s important to us to fly our flag where public forums allow flags of religious expression because religious liberty is dependent upon pluralism and government viewpoint neutrality.”

“Where religion is allowed to encroach in public spaces, we must remain vigilant to ensure that no arbitrary restrictions are imposed that limit the civic capacities of some, or elevate those of others based upon their religious opinions, practices, or identity,” he said. “Boston is particularly, and disturbingly, ignorant of those basic constitutional principles.”

Greaves went on to note that his organization is currently in litigation “against the city for denying our request to give an invocation preceding a city council meeting, even as they invite outside religious speakers to open each meeting.”

“We feel that our battles to ensure equal public forum access are nothing short of frontline skirmishes in a war to defend civil liberties against alarming, and swiftly advancing, theocratic efforts to have them overturned,” he continued.

The news of The Satanic Temple’s application to fly a flag at City Hall was first reported by MassLive. The flag the Temple wants to fly features black-and-white stripes and a goat’s head and pentagram symbol, according to Greaves.

The city’s flag-raising program at City Hall was suspended last October. And a city spokesman said this week that Boston officials are reviewing the Supreme Court’s decision “and its recognition of city governments’ authority to operate similar programs.”

“As we consider next steps, we will ensure that future City of Boston programs are aligned with this decision,” said the spokesman in a statement.

In other words, it doesn’t sound like the Temple’s flag will be flying outside City Hall in the near future.

In a ruling written by retiring Justice Stephen Breyer, the US Supreme Court said that Boston was wrong to deny Camp Constitution, run by West Roxbury resident Harold Shurtleff, a permit to raise a white banner with a red Christian cross in connection with Constitution Day on Sept. 17, the date the US Constitution was signed in Philadelphia in 1787.

“We conclude that, on balance, Boston did not make the raising and flying of private groups’ flags a form of government speech,’’ Breyer wrote. “That means, in turn, that Boston’s refusal to let Shurtleff and Camp Constitution raise their flag based on its religious viewpoint” abridged their freedom of speech.

It was the only time the city refused to fly a flag, having approved 284 requests from various countries, causes, businesses, and organizations between 2005 and 2017, the court said.

In 2019, The Satanic Temple in Salem announced that it had been officially recognized as a church by the Internal Revenue Service. Last September, meanwhile, the organization joined the opposition to Texas’ new abortion measure, claiming its members qualify for an exemption to the law as a faith-based organization.

The Temple asserted that its members should be allowed to take medication that induces abortions within 24 weeks of pregnancy as an expression of religious freedom.

The Satanic Temple, which was founded in 2013, does not have ties to the Church of Satan, and its website notes the two are often confused. The Temple is “resolutely non-theistic” and “does not endorse supernatural (or “supernormal”) explanations,” its website states. Its mission is “to encourage benevolence and empathy, reject tyrannical authority, advocate practical common sense, oppose injustice, and undertake noble pursuits,” according to its website.

The group, in fact, states it does not believe in the existence of Satan or the supernatural, but rather views Satan as “a symbol of the Eternal Rebel in opposition to arbitrary authority.”

Regarding the Texas abortion law, the group cited the federal Religious Freedom Restoration Act, under which Native Americans can access peyote for their religious rituals, in claiming the group should have access to abortion medications for religious purposes.

TST’s membership uses these products in a sacramental setting,” the Temple stated in a letter, adding that the “Satanic Abortion Ritual is a sacrament which surrounds and includes the abortive act.”