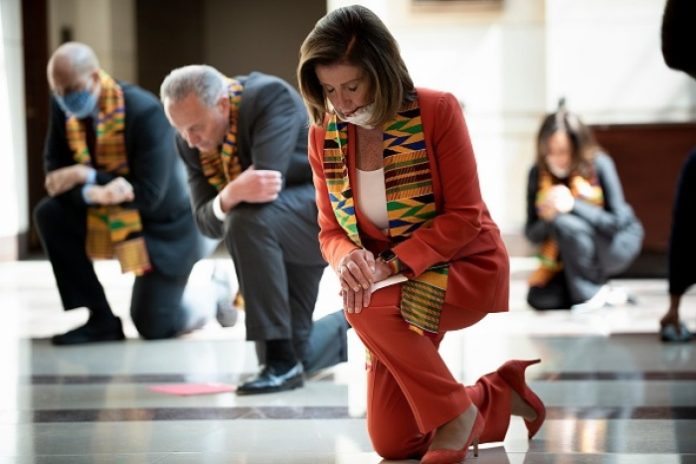 The separation of church and state has been a contested issue for years now. It is coming back into focus on the heals of an assistant High School football coach leading his team in prayer after a game. Continue reading this story from CNSNews:

When the House of Representatives convened for a three-minute session on Monday, the proceedings opened with a written statement from House Speaker Nancy Pelosi.

“I hereby appoint the Honorable Andy Kim to act as Speaker pro tempore on this day,” Pelosi declared.

As recorded by C-SPAN, Kim, empowered by Pelosi, then instantly announced: “The prayer will be offered by Chaplain Kibben.”

The Rev. Margaret Kibben stepped to the podium. “Would you pray with me?” she asked with a smile.

“God our creator, redeemer, and sustainer, great are Your promises to us,” said Kibben in words now immortalized in the Congressional Record.

Her prayer, as recorded by C-SPAN, lasted about 1 minute and 20 seconds.

“So, may our work be effective and our lives beneficial, as we seek to serve our communities, our country, and You. In the strength of Your name we pray,” she concluded.

The House chaplain is not a volunteer. As of 2019, according to the Congressional Research Service, the person in that job is paid an annual salary of $172,500.

So, the House pays a chaplain to — among other things — publicly pray in its chamber and, for example, to declare for Congress, as Kibben did Monday, that “we seek to serve … You.”

When Kibben’s prayer was completed, Kim called for the chair to lead the House in the Pledge of Allegiance.

The members in the chamber then turned to the flag behind the speaker’s podium and put their right hands over their hearts. “I pledge allegiance to the flag of the United States of America,” they said, “and to the Republic for which it stands, one nation under God, indivisible, with liberty and justice for all.”

Slightly more than a minute later, Kim adjourned the House.

Its main business that day had been two-fold: saying a prayer to God, whom House members “seek to serve,” and pledging allegiance to “one nation under God.”

Across the street that same day, the Supreme Court was considering Joseph A. Kennedy v. Bremerton School District, the case of an assistant coach who prayed in public after football games.

“BSD employed Kennedy as a football coach at Bremerton High School from 2008 to 2015,” said an initial opinion filed in 2017 by the U.S. Court of Appeals for the 9th Circuit.

“Kennedy’s religious beliefs do require him to give thanks through prayer at the end of each game for the players’ accomplishments and the opportunity to be part of their lives through football,” said the court.

“Specifically,” it said, “‘(a)fter the game is over and the players and coaches from both teams have met to shake hands at midfield,’ Kennedy feels called to ‘take a knee at the 50-yard line and offer a brief, quiet prayer of thanksgiving for player safety, sportsmanship, and spirited competition.’ Kennedy’s prayer usually lasts about thirty seconds.”

That makes it shorter than the prayer delivered this Monday by the House chaplain.

Nor did Kennedy require players to join him in prayer.

“Kennedy began performing these prayers when he first started working at BHS,” said the appeals court. “At the outset, he prayed alone. Several games into his first season, however, a group of BHS players asked Kennedy whether they could join him. ‘This is a free country,’ Kennedy replied. ‘You can do whatever you want.’

“Hearing that response,” said the court, “the students elected to join him. Over time, the group grew to include the majority of the team. Sometimes the BHS players even invited the opposing team to join.”

It took the school district eight years to find out that Kennedy was praying in the vicinity of games.

“The District first learned that Kennedy was leading locker-room prayers and praying on the field in September 2015, when an employee of another school district mentioned the post-game prayers to a BSD administrator,” said the court.

The local school superintendent sent Kennedy a letter explaining “that Kennedy’s two practices were ‘problematic’ under the Establishment Clause.”

The First Amendment leads off with that clause, which says: “Congress shall make no law respecting an establishment of religion.”

The amendment goes on to say that Congress shall make no law “prohibiting the free exercise” of religion, “or abridging the freedom of speech, or of the press, or the right of the people to freely assemble.”

So, if a group of public school football players freely assemble at the 50-yard line after a game and freely exercise their right to say a prayer, does that mean they have established a government religion?

After Kennedy ultimately declined to discontinue his postgame prayer, he was suspended by the school district. He sued on First Amendment grounds.

The 9th Circuit ruled that Kennedy was speaking not as a private citizen but as a government employee when he prayed after games.

“In sum,” said the court, “when Kennedy kneeled and prayed on the fifty-yard line immediately after games while in view of students and parents, he spoke as an employee, not a private citizen, and his speech therefore was not constitutionally protected.”

“Here, an objective BHS student familiar with the history and context of Kennedy’s conduct would perceive his practice of kneeling and praying on the fifty-yard line immediately after games in view of students and spectators as District endorsement of religion or encouragement of prayer,” said Smith. “The District therefore justifiably restricted Kennedy’s speech to avoid violating the Establishment Clause.”

The 9th Circuit considered the case again in 2021 and again ruled against Kennedy.

(Terence P. Jeffrey is the editor-in-chief of CNSNews.com.)