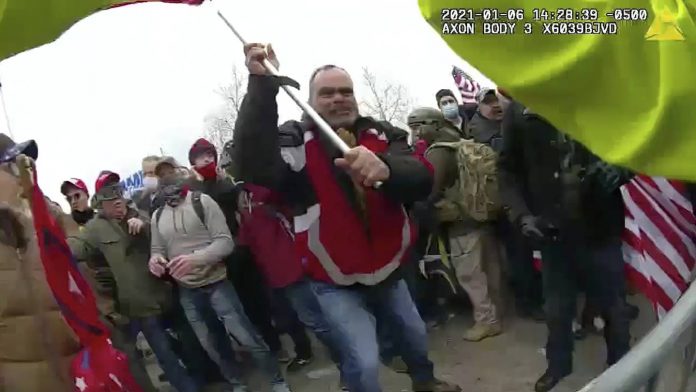 Trial of those arrested in the Jan 6th Capitol riot continue. Some defendants have had their defenses rejected by jurors, while others still have time to rethink their cases. Continue reading this story from FOX13 News Memphis:

Jurors have heard — and rejected — an array of excuses and arguments from the first rioters to be tried for storming the U.S. Capitol. The next jury to get a Capitol riot case could hear another novel defense this week at the trial of a retired New York City police officer.

Thomas Webster, a 20-year veteran of the NYPD, has claimed he was acting in self-defense when he tackled a police officer who was trying to protect the Capitol from a mob on Jan. 6, 2021. Webster’s lawyer also has argued that he was exercising his First Amendment free speech rights when he shouted profanities at police that day.

Webster, 56, will be the fourth Capitol riot defendant to get a jury trial. Each has presented a distinct line of defense.

An Ohio man who stole a coat rack from a Capitol office testified he was “following presidential orders” from Donald Trump. An off-duty police officer from Virginia claimed he only entered the Capitol to retrieve a fellow officer. A lawyer for a Texas man who confronted Capitol police accused prosecutors of rushing to judgment against somebody prone to exaggerating.

Those defenses didn’t sway the juries at their respective trials. Collectively, a total of 36 jurors unanimously convicted the three rioters of all 17 counts in their indictments.

Webster faces the same fate if a federal judge’s blistering words are any guide. U.S. District Judge Amit Mehta, who will preside over Webster’s trial, has described his videotaped conduct as “among the most indefensible and reprehensible” that the judge has seen among Jan. 6 cases, with “no real defense for it.”

“You were a police officer and you should have known better,” Mehta told Webster during a bond hearing last June, according to a transcript.

But a dozen jurors, not the judge, will decide the case against Webster, a U.S. Marine Corps veteran who retired from the NYPD in 2011. Jury selection is scheduled to start on Monday.

A wealth of video evidence and self-incriminating behavior by riot defendants has given prosecutors the upper hand in many cases. Mary McCord, a Georgetown University Law Center professor and former Justice Department official, said jurors often won’t have to rely on witness testimony or circumstantial evidence because videos captured much of the violence and destruction on Jan. 6.

“When I was a prosecutor trying cases, I would have loved to have had cases where the entire crime was on video. That just doesn’t happen that often. But for jurors, it can be very powerful,” she said.

Webster’s trial is the sixth overall. In a pair of bench trials, a different federal judge heard testimony without a jury before acquitting one defendant and partially acquitting another.

U.S. District Judge Trevor McFadden, a Trump nominee who acquitted Matthew Martin of all charges, said it was reasonable for the New Mexico man to believe that police allowed him to enter the Capitol. In the first bench trial, McFadden convicted New Mexico elected official Couy Griffin of illegally entering restricted Capitol grounds but acquitted him of engaging in disorderly conduct.

Stephen Saltzburg, a George Washington Law School professor and former Justice Department official, said it may be difficult for prosecutors to secure convictions against defendants who merely entered the Capitol and didn’t exhibit any violent or destructive behavior.

“I think the people with the best chances are those who say, ‘I was just there and I got swept up with everybody else.’ The government is going to have to have some way to show there’s more than that or the government will lose,” Saltzburg said.

Webster brought a gun and a Marine Corps flag attached to a metal pole when he traveled alone to Washington from his home in Florida, New York, a village approximately 70 miles northwest of New York City. He wore his NYPD-issued bulletproof vest but says he left the pistol in his hotel room when he headed to the Jan. 6 rally where Trump spoke.

Police body camera video captured Webster’s confrontation outside the Capitol with a line of officers, including one identified only as “Officer N.R.” in court papers.

The unnamed Metropolitan Police Department officer described the encounter in a written statement. The officer said Webster swung the flagpole at him in a downward chopping motion, hitting a metal barricade, then charged at him with clenched fists.

“He pushed me to the ground and attempted to violently tear away my gas mask and ballistic helmet. This caused me to choke and gasp for air before another participant at the riot helped me to my feet,” the officer wrote.

The officer said he retreated behind a police line after Webster pinned him to the ground.

“His actions, attack and targeted assault caused me to fear for my life and could have easily left my wife and two small children without a husband and father,” the officer wrote.

Defense attorney James Monroe has claimed the unnamed officer gestured toward Webster, “inviting him to engage in a fight,” before reaching over a police barrier and punching Webster in his face. Webster “used that amount of force he reasonably believed necessary to protect himself” by tackling the officer to the ground, Monroe said in a court filing.

Mehta, however, said the video doesn’t show Webster getting punched in the face. The judge described Webster as an instigator.

“It was his conduct that sort of broke the dam, at least in that area,” Mehta added.

Webster, now a self-employed landscaper, enlisted in the Marine Corps in 1985, was honorably discharged in 1989 and joined the NYPD in 1991. His department service included a stint on then-Mayor Michael Bloomberg’s private security detail.

Monroe claimed “Officer N.R.” had reached over a metal barrier and pushed a “peaceful” man who was blinded by pepper spray.

“As a former U.S. Marine and a member of law enforcement, Mr. Webster’s moral instinct was to protect the innocent,” Monroe wrote.

Assistant U.S. Attorney Hava Mirell has argued that Webster should be held to a higher standard given his professional experience.

“If he were there to protect the innocent, then he should have been fending other rioters off from the barricade, not the other way around,” Mirell said at the bond hearing.

Webster faces six counts, including assaulting, resisting or impeding an officer using a dangerous weapon. He’s the first Capitol riot defendant to be tried on an assault charge. He isn’t accused of entering the Capitol.

Jurors convicted two rioters of interfering with officers. One of them, Thomas Robertson, was an off-duty police officer from Rocky Mount, Virginia. The other, Texas resident Guy Wesley Reffitt, also was convicted of storming the Capitol with a holstered handgun.

The third Capitol rioter to be convicted by a jury was Dustin Byron Thompson, an Ohio man who said he was following Trump’s orders.

“Even if jurors accepted that (Thompson) felt like he was doing what the former president wanted, that still wouldn’t be a legal excuse,” said McCord, the Georgetown professor. “When juries are able to witness what happened, they can make that assessment relatively easily.”

Copyright 2022 The Associated Press. All rights reserved. This material may not be published, broadcast, rewritten or redistributed without permission.