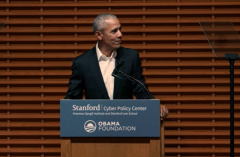 Free Speech has been a contested issue on social media. Debates on regulations and what is or is not covered litter the social media landscape. Former President Barack Obama weighs in on the subject of Social Media regulation. Continue reading this story from CNSNews:

(CNSNews.com) – In a lengthy speech at Stanford University on Thursday, former President Barack Obama noted that “Freedom of speech is at the heart of every democratic society,” and he declared himself to be “pretty close to a First Amendment absolutist.”

“I believe that in most instances the answer to bad speech is good speech. I believe that the free, robust, sometimes antagonistic exchange of ideas produces better outcomes and a healthier society,” Obama said.

But when it comes to social media companies, “regulation has to be part of the answer,” Obama said.

“Now, some companies have been taking the next step in managing toxic content, experimenting with new product designs that, to use just one example, add friction to slow the spread of potentially harmful content. And that kind of innovation is a step in the right direction. It should be applauded, but I also think decisions like this shouldn’t be left solely to private interests,” Obama said.

“These decisions affect all of us, and just like every other industry that has a big impact in our society, that means these big platforms need to be subject to some level of public oversight and regulation.”

Obama said he’s “not convinced” that the wholesale repeal of Section 230 is the answer. Section 230 of the U.S. Code generally shields social media companies from lawsuits for content that third parties post on their platforms.

And here is where the “First Amendment absolutist” called for regulation:

“A regulatory structure, a smart one, needs to be in place, designed in consultation with tech companies, and experts and communities that are affected, including communities of color and others that sometimes are not well represented here in Silicon Valley, that will allow these companies to operate effectively while also slowing the spread of harmful content. In some cases, industry standards may replace or substitute for regulation, but regulation has to be part of the answer.

“Beyond that, tech companies need to be more transparent about how they operate. So much of the conversation around disinformation is focused on what people post. The bigger issue is what content these platforms promote.

“Algorithms have evolved to the point where nobody on the outside of these companies can accurately predict what they’ll do, unless they’re really sophisticated and spend a lot of time tracking it. And sometimes, even the people who build them aren’t sure. That’s a problem.

“In a democracy, we can rightly expect companies to subject the design of their products and services to some level of scrutiny. At minimum, they should have to share that information with researchers and regulators who are charged with keeping the rest of us safe.”

Obama told Stanford students the main reason for the “weakening” of democracies is “the profound change that’s taking place in how we communicate and consume information.”

He noted that the Internet — the “information revolution” — “has been transformative,” even helping to elect him president twice.

“But like all advances in technology,” he said, “this progress has had unintended consequences that sometimes come at a price. And in this case, we see that our new information ecosystem is turbocharging some of humanity’s worst impulses.”

Obama used the latter part of his speech to urge Americans to break through their “information bubbles” and to “broaden” their perspectives.

“As citizens, we have to take it upon ourselves to become better consumers of news, looking at sources, thinking before we share and teaching our kids to become critical thinkers who know how to evaluate sources and separate opinion from fact,” he said.

“In fact, a number of school districts around the country are working to train kids in this kind of online media literacy, not around any particular ideological perspective, but just how to check a source. Does this person who’s typing in his mother’s basement in his underwear seem a credible authority on climate change? (Laughter.) That’s something we should all want to support.

“Part of this project is also going to require us was finding creative ways to reinvigorate quality journalism, including local journalism, because one of the challenges we have, part of the reason that you’ve seen increased polarization, is all media has become nationalized and hence, more ideological.

“And one encouraging trend has been a number of nonprofit newsrooms beginning to pop up in places like Baltimore, Houston, my hometown of Chicago, all aimed at providing essential coverage of what’s happening locally and in statehouses. And that’s an example of how new models of journalism are possible, along with smart ways for communities to reinvigorate local news.”

Obama took a few swipes at Republicans in his speech, including this one:

“If Republican elected officials with a few notable courageous exceptions, and I’m not going to mention them, because I don’t want them to be criticized for having been praised by me — (laughter) — but if the vast majority of elected Republican officials keep insisting that there’s nothing wrong with saying an election was stolen without a shred of evidence, when they know better, this isn’t going to work.”

Obama said now is the time for everyone to “pick a side.” “We have a choice right now. Do we allow our democracy to wither or do we make it better? That’s the choice we face, and it is a choice worth embracing.”

Obama bemoaned the “steady stream of bile and vitriol” on social media, but he said, “it doesn’t have to be that way.”

He described handwritten signs, TV, the Internet and social media as “tools.”

“At the end of the day, tools don’t control us. We control them, and we can remake them. It’s up to each of us to decide what we value, and then use the tools we’ve been given to advance those values.

“And I believe we should use every tool at our disposal to secure our greatest gift, a government of, by, for the people for generations to come. And I hope you agree with me, and I look forward to you joining in the work.”