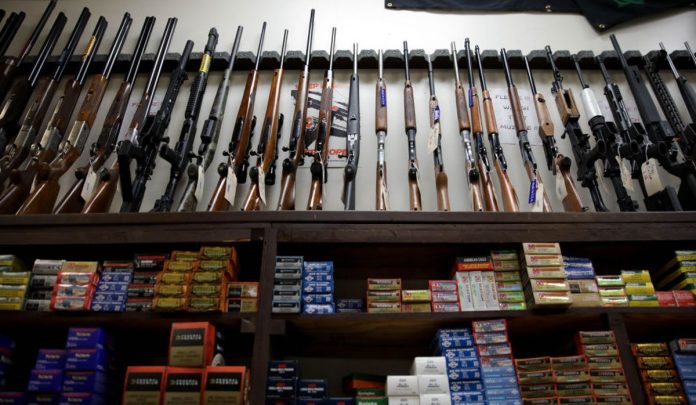 Arizona banks may soon be barred from discriminating against businesses in the firearms industry.

Under a new bill, HB2473, banks would be prohibited from receiving government contracts if they don’t pledge to avoid discriminating against those in the firearms industry. The legislation would not impact existing contracts.

“Businesses can do what they like, but these are the ones speaking are federally chartered banks. We have to make this right for the people,” said Carroll. “[These banks] are saying they have a right to make political decisions about banking. What is that to the people that need banking services?”

During a committee hearing last month, Ruger Firearms VPO Tim Lowney said their decades-long relationship with Bank of America was cut abruptly cut short. The bank had informed Lowney they would no longer do business with his company because they’re in the firearms industry. Ruger has over 400 employees in Arizona.

Lowney said Ruger faced similar problems at other banks, and that firearms dealers are also suffering.

Arizona Bankers Association (ABA) spokesman Jay Kaprosy argued that there weren’t any circumstances in which a business was entirely unable to obtain banking due to their relation in the firearms industry.

“We have searched high and low trying to find circumstances in which there is a firearms business or a rampant set of firearms businesses that are going without a bank [or] banking relationship. We’ve been unable to find any,” said Kaprosy.

The National Shooting Sports Foundation (NSSF) has been engaged in similar legislation across the country, in Congress and in states like Oklahoma, Louisiana, and Kansas. NSSF Public Affairs Director Mark Oliva told The Daily Wire that these bills ensure that people’s right to bear arms truly remains viable: if banks stop those in the firearm industry from doing business, then people may not be able to obtain those firearms.

Major banks with policies limiting or outright prohibiting business with those in the firearms industry include CitiGroup, which, for example, turns away those who sell firearms to individuals under 21 or who haven’t passed a background check, as well as those who sell bump stocks or high-capacity magazines.

“These groups are trying to institute laws that are going well beyond what’s prescribed in federal and state laws to institute their own gun agenda through their own corporate largesse,” said Oliva. “They’re unaccountable to the American public. This is why we elect leaders, because they can represent us on these issues. If we disagree with them, we have the ability to vote them out. We don’t have that ability with the corporate boardrooms.”

Even speaking in favor of non-discrimination legislation may come at a cost.

NSSF told The Daily Wire how Brandon Maddox, founder of a suppressor manufacturer and distributor Silencer Central, had his service terminated with Capital One earlier this year after he testified in favor of similar legislation in South Dakota. Up until Capital One turned him away, Maddox was required to use a personal credit card for his business because the bank’s policies prevented him from getting a corporate card. Maddox applied for a corporate card by listing as a sporting goods business before testifying in favor of the proposed non-discrimination legislation. Almost immediately, Capital One denied his application for a corporate card and informed him that they terminated his private card service.

Banking policies barring business with those in the firearms industry have been underway for years, largely in response to mass and school shootings. In 2018, national headlines reflected a major culmination of banks’ efforts, noting one example of how payment processing services Stripe and Intuit refused to do business with a small handgun company in Georgia.

That kind of behavior may come to a halt in Arizona soon with HB2473. It passed out of the Senate Appropriations Committee at the end of March, and awaits scheduling for a final vote on the Senate floor.

Corinne Murdock is a reporter for The Daily Wire and AZ Free News. Have something you think the mainstream media won’t cover? Send tips to corinnejournalist@gmail.com.

The Daily Wire is one of America’s fastest-growing conservative media companies for breaking news, investigative reporting, sports, podcasts, in-depth analysis, books, and entertainment for a reason: because we believe in what we do. We believe in our country, in the value of truth and the freedom to speak it, and in the right to challenge tyranny wherever we see it. Believe the same? Become a member now and join our mission.