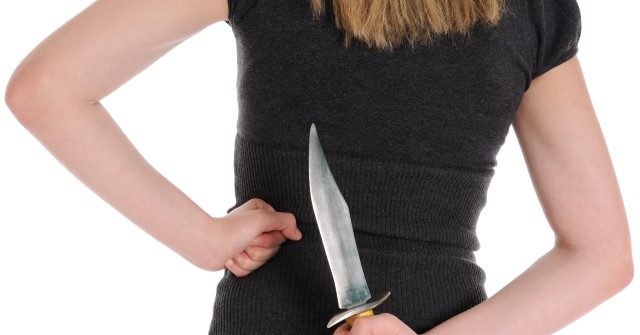 A 14-year-old girl armed herself with kitchen knives and chased an alleged intruder from her Middleborough, Massachusetts, home Friday morning.

Boston 25 reports that 14-year-old Avery Cormier awoke to sounds of someone breaking in through a window and “stealing items.”

It appears the intruder did not know anyone was in the house at the time.

Avery came downstairs, grabbed kitchen knives, and confronted the intruder. The suspect dropped the items he had purportedly planned to steal and fled the scene.

Avery’s mother said, “[She] started screaming at him: ‘Get the ‘F’ out of my house! You don’t belong here. This is my house.’ He turned around and looked at her, and Avery said he looked so shocked and scared, like, ‘What?’ Here’s this kid there with two knives. And he kind of slinked away.”

NBC Boston notes that Avery followed the alleged intruder out of the house and captured video of him getting in his vehicle. The video showed the license plate number and helped police apprehend the man.

Below is the audio of the 911 call the girl made, which the girl’s parents authorized the Middleborough Police Department to release.