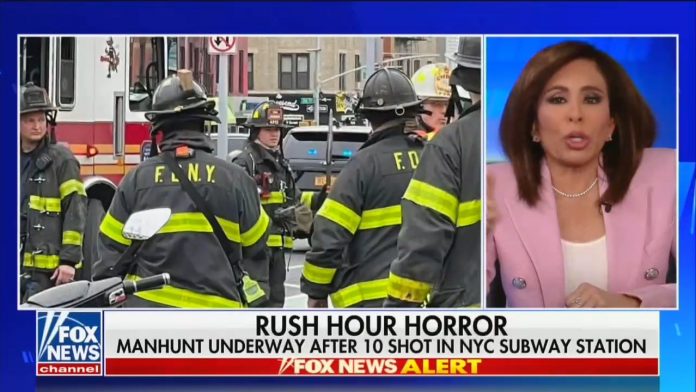 New York City Mayor Eric Adams has recieved so criticism from the Fox News panel show The Five, over his handling of the shooting that took place on the New York City subway. Criticisms range from not labeling this attack as an act of terror, to the fact that mayor Adams is currently under Quarantine. Continue reading this story from Mediaite:

The co-hosts of Fox News’ highly rated panel show The Five discussed the aftermath of the New York City subway shooting on Tuesday and two of the hosts had some strong words for New York City Mayor Eric Adams.

In a lengthy discussion, Greg Gutfeld expressed disbelief at the state of New York City’s streets. “We are in the midst of a crime wave that’s pretty ugly and the subways are disgusting,” he said. “The streets are depressing. This is an anomaly. I don’t know why you can’t call this a terrorist act. It is an act of terror.”

Gutfeld was referring to the rush-hour shooting in Brookly that left at least 29 people injured after a masked gunman threw a smoke grenade and opened fire on a crowded platform.

“I fought for hate crimes law in New York and a federal one as well,” jumped in Judge Jeanine Pirro, explaining why the police are hesitant to label the shooting terrorism. “There should be a punishment when you select a victim based on hate. But I think for them to have said from the get-go this wasn’t terrorism was very unusual,” she concluded.

Pirro went on to lament how the act of violence is an unfortunate setback for New York. “Just when people are saying the city’s coming back, now we have the situation on a train. We’ve had stabbings on the train. People are being shoved in front of trains. From a macro level, this is the kind of thing that will continue to happen until we get Albany and the Democrats to start putting people in jail and recognizing that there are people who are a danger to a community,” she argued.

The discussion turned back to motive and whether or not authorities were right not to label the act terrorism. Dana Perino then played a clip from Mayor Adams, who did use the word “terrorize,” but also was hesitant to call the shooting an act of terrorism.

“Someone attempted to terrorize our system. They brought in what appears to be some form of smoke device. They discharged a weapon. So I don’t want to be premature in identifying this was or was not. I think at this time the investigators are going to do their due diligence to properly identify what happened here. This time it’s premature to state exactly what happened,” Adams said in the clip.

“I appreciate the caution while they try to figure out what’s behind all this,” argued Perino.

Jesse Watters jumped in and commented on Adam’s leadership during the crisis. “He has Covid and looks ridiculous managing this shooting spree from quarantine from his apartment. Come on. Put a mask on. Get outside and manage the crisis. It’s okay,” Watters said.

“I understand what he is saying. They think Muslim, they think jihadist and we get that. I guess technically when you’re doing some sort of mass shooting, it’s terrorizing the population. But when he says the word it makes New Yorkers think oh, my God. It brings it back to 9/11,” Watters added, before ripping into New York Governor Kathy Hochul (D-NY).

The conversation turned to Hochul and other New York leaders before Pirro added she can “agree with Jesse on one thing.”

“You’ve got a mayor, Mayor Adams, put on the damn mask and get out there. I’ll tell you why. He’s a cop. This guy knows crime. Stop wussing around in your house because you may have Covid. Put the mask on and get out there and make New Yorkers believe you are a cop,” Pirror concluded.