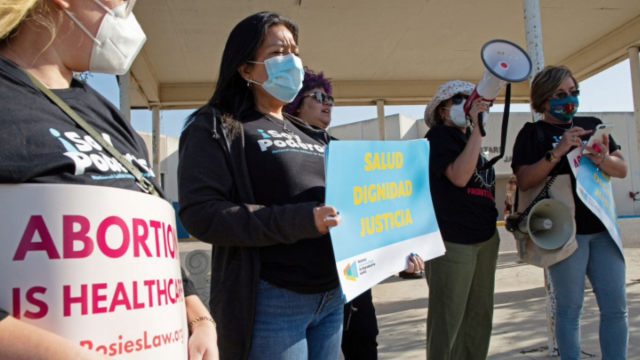 Abortion advocates gathered in protest outside of the Starr County, TX, Sheriff’s Office. The cause being to protest the arrest of a woman who reportedly admitted to inducing the death of her unborn child. Continue reading this story from MRCTV:

In a sad addition to an even sadder tragedy, a group of abortion advocates Saturday gathered outside the Starr County, TX, Sheriff’s Office to protest the arrest of a woman who reportedly admitted to inducing the death of her unborn child.

In a subsequent development, the District Attorney says the woman will not be prosecuted.

A small group of protesters gathered Saturday outside a sheriff’s office in southwestern Texas where a 26-year-old woman was reportedly charged with murder after performing what they said was a ‘self-induced abortion.’

About 20 people gathered outside the Starr County Jail on Saturday morning in a protest organized by La Frontera Fund, an abortion assistance group in the Rio Grande Valley.

She miscarried at a hospital and allegedly confided to hospital staff that she had attempted to induce her own abortion and she was reported to the authorities by hospital administration or staff.

And, of course, these protesters, some of whom were pictured by Reuters as they stood outside the Sheriff’s office in Rio Grande City and held signs saying, “Abortion Is Healthcare,” do not like the Texas statute passed last year that bans abortions after six weeks from conception, unless a mother’s life was in danger.

Regardless of whether the state prosecutes, this tragic story, and this protest in Texas, introduce powerful messages about double-standards and how easily some people will blind themselves to their own hypocrisy.

As I have noted for MRCTV, if one accepts the notion that the state exists to stop or punish people who harm other human beings or take their property, then one needs to address what is a human being.

Upon conception, a fetus is “human” and is “being.” These qualities are manifest and inextricably entwined with the very existence of the words. The new fetus has his or her own distinct DNA, and is alive – on the great arc of God-given life, from creation to physical demise.

Thus, those who believe the state should force their neighbors to feed the tax machine in order to run a state “protection” system might want to take a few moments in their lives to self-reflect on their own hypocrisy.

It could become an ever-larger net, they might argue.

Of course, there is a profound difference between intentionally causing a miscarriage, and mistakenly doing so.

But, let’s say that one could blur the lines between loss of a fetus due to neglect and loss due to intent – something analogous to the charge of “manslaughter” or “unintended homicide” versus intentional homicide.

Some might argue that the state could lay charges against women merely for “not eating right,” or not sleeping enough, or engaging in some measure of behavior that the state says “puts the fetus at risk.”

That’s possible. And that’s why, if one IS going to advocate for the existence of government, it’s a bad idea to favor large governmental bodies that cover lots of people and large geographic areas. The larger the area of control, the more people will be harmed, and the harder it is to escape.

The US Founders never went as far towards real freedom as they could have. They could have looked to ancient Ireland and Viking Age Iceland as examples of truly local, voluntary-governance systems. Both the Irish Brehon Law system and the Icelandic Goddard/Godard system relied on voluntary agreement, on small, decentralized levels for rules, with no taxation, no force.

But the Founders DID allow for decentralization, and, over the two-hundred-plus years since their system was codified, that system of decentralization has been hit, over and over.

In their time, capital murder was to be defined by the states, with any cross-state crimes being handled by federal statute. The Fourteenth Amendment subsequently required all states to “protect” people equally.

So, one need not study Constitutional Law for decades to realize that federalizing the abortion issue is wrong, that if states have statutes criminalizing and punishing the taking of human lives, those states must apply those statutes to protect all people equally. It appears that, already, this case shows that government agents in Texas will not apply the statutes equally. The DA has asked for charges to be dropped.

And unless these protesters are pushing for no government, they, too, are hypocrites – about human life, and about government itself.

There is no other way to see it.