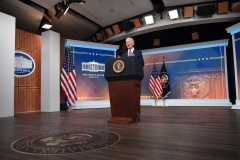 Gas prices are currently putting tremendous pressure on American households. President Biden hopes to ease that pressure and pain with the release of a record amount of US strategic oil reserves. Continue reading this story from CNSNews:

President Joe Biden announces that the United States will be releasing a record amount of oil from the US strategic oil reserves to help bring down the cost of oil in the South Court Auditorium, next to the White House, in Washington, DC, on March 31, 2022. (Photo by NICHOLAS KAMM/AFP via Getty Images)

(CNSNews.com) – President Biden called out oil companies Thursday that he said are refusing to ramp up oil production no matter how high gas prices surge.

Biden announced steps to reduce the impact of what he called “Putin’s price hike,” which includes punishing oil companies that don’t restart oil wells or don’t produce oil on the sites they lease.

For U.S. oil companies that are recording their largest profits in years, they have a choice. One, they can put those to productive use by producing more oils, restarting idle wells or producing on the sites they already are leasing, giving the American people a break by passing some savings on to their customers and lowering the price at the pump or they can as some of them are doing, exploit the situation, sit back, ship those profits to the investors and while American families struggle to make ends meet.

Look, this is a moment of consequence and peril for the world and pain at the pump for American families. It’s also a moment of patriotism. I want to acknowledge those companies that have already announced they are increasing immediate production. They are investing money to produce more oil and also clean technology we need to reduce our dependence on oil in the future. They have everything they need.

Nothing’s standing in their way, and they have indicated they will be producing an extra 1 million barrels of oil per day, probably starting as early as this fall. That’s progress, but some companies have been pretty blunt. They don’t want to increase supply because Putin’s price hike means higher profits. One C.E.O. even acknowledged they don’t care if the price of a barrel of oil goes to $200 a barrel. They are not going to step up production.

I say enough, enough of lavishing excessive profits on investors and payouts and buy-backs when the American people are watching. The world is watching. U.S. oil companies made nearly $80 billion in profit last year, and this year those profits are expected to continue to soar. This is the time, not the time to sit on record profits.

It’s time to step up for the good of your country, the good of the world to invest in the immediate production we need to respond to Vladimir Putin. To provide some relief for your customers, not investors and executives.

Look, I’m a capitalist. I have no problem with corporations turning a good profit, but companies have an obligation beyond just their shareholders, to their customers, community and country. No American country should take advantage of a pandemic or Vladimir Putin’s actions to enrich themselves and the expense of American families.

Biden began his speech by laying blame at Russian President Vladimir Putin’s feet for the high cost of gas while not mentioning how his energy policies have affected gas prices.

“Today I want to talk about one aspect of Putin’s war that affects and has real effects on the American people – Putin’s price hike that Americans and allies are feeling at the pump,” he said.

The president explained that gas prices were high because of the pandemic, but they climbed higher because of Russian President Vladimir Putin’s invasion into Ukraine, followed by the administration’s decision to ban Russian oil.

The problem we are facing with gas prices has two roots. First, the pandemic. When COVID struck, demand for oil plummeted so production slowed down worldwide. Because of the strength and the speed of our recovery, demand for oil shot back up much faster than the supply. That’s why the cost of gas began to rise last year.

The second root is Vladimir Putin. The start of this year gas was about 3.30 a gallon. Today it’s about averaging 4.20, 4.22, it’s higher in many states – Nearly a dollar more in less than three months. The reason for that is because of Putin’s war, and now many people are no longer buying Russian oil around the world.

I banned the import of Russian oil here in America, Republicans and Democrats in congress called for it and supported it. It was the right thing to do, but I said at the time it’s going to come with a cost. As Russian oil comes off the global market, supply of oil drops and prices are rising.

Now Putin’s price hike is hitting Americans at the pump, which brings me to the first part of my plan. To immediately increase the supply of oil, our prices are rising because of Putin’s action. There isn’t enough supply, and the bottom line is if we want lower gas prices we need to have more oil supply right now.

Biden announced what he called “a use it or lose it policy” to help execute the first part of his plan on domestic oil production.

“Congress should make companies pay fees on wells, on federal leases they haven’t used in years and acres of public land they are hoarding without production. Companies that already produce from these wells won’t be affected, but those sitting on unused leases and idle wells will either have to start producing or pay the price for their inaction,” he said.

“Look, the action I’m calling for will make a real difference over time, but the truth is, it takes months, not days for companies to increase production. That’s why the next part of my plan is so important,” the president said.

Biden is authorizing the release of 1 million barrels a day from the Strategic Petroleum Reserve over the next six months.

“This is a wartime bridge to increase oil supply until production ramps up later this year, and it is by far the largest release of our national reserve in our history. It will provide a historic amount of supply for a historic amount of time, six-month bridge to the fall, and we’ll use the revenue from selling the oil now to restock the Strategic Petroleum Reserve when prices are lower,” he said.

The second part of Biden’s plan is “declaring real American energy independence in the long-term.” To this end, he said the nation and the whole world needs to reduce their dependence on fossil fuels.

Biden issued “a directive to strengthen our clean energy economy” by using the Defense Production Act to secure U.S. supply chains “for critical materials to go into batteries for electric vehicles and the storage of renewable energy, lithium, graphite, nickel, and so much more.”

“We need to end our long-term reliance on China and other countries for inputs that will power the future. I’ll use every tool I have to make that happen. Yes, it will help safeguard our national security. Yes, it will help us tackle climate change. Yes, it’s going to help us ensure that Americans create millions of good paying jobs for generations to come, but the most important thing my plan will do right away is save your family money,” he said.

“Here is what I mean. Under my plan, which is before the Congress now, we can take advantage of the next generation of electric vehicles. That typical driver will save about $80 a month from not having to pay gas at the pump. If your home is powered by safer, cleaner, cheaper electricity like solar or heat pumps, you can save $500 a month on average,” Biden said.

“Don’t take my word for it. The CEOs of 11 of America’s largest utility companies came to see me at the White House several weeks ago. They told me if we pass my plans before the Congress, typical families will see savings show up in their utility bills immediately, and costs will come down even more as we innovate and develop cutting edge energy storage technology, clean hydrogen technology, advanced nuclear technology, carbon capture and sequestration technology,” he said.

“And by the way, this week the benefit I included in the bipartisan infrastructure law helped families weatherize their homes,” the president said. “My administration is making $3.2 billion available from this legislation to provide up to $6,500 direct payment for working class families to be able to weatherize their homes, to save them money, to keep them warm in the winter and cool in the summer. It’s a direct grant.

“This program has been around awhile, and in the past, delivered to average families another $327 in savings, but now we have the ability to reach 10 times as many families because of legislation we already passed,” he said.

Biden also said that the nation is setting new fuel economy standards for new vehicles, which will allow vehicles to travel 10 more miles on every gallon of gas within five years.