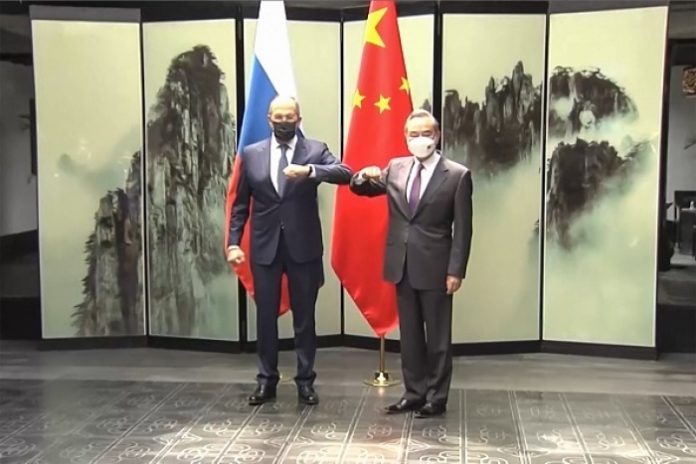 The war in Ukraine continues to rage on, as the world continues to hope for a peaceful end. China continues to show support for the Russian cause, at least in rhetoric. Continue reading this story from CNSNews:

(CNSNews.com) – Two weeks after President Biden urged Chinese President Xi Jinping in a video call not to support Moscow’s invasion of Ukraine and warned that doing so would come at a cost, Beijing on Wednesday reaffirmed that cooperation between China and Russia knows no limits, including in their joint “opposition to hegemony.”

“There is no limit to China-Russia cooperation in the pursuit of peace, no limit to our efforts to safeguard security, and no limit to our opposition to hegemony,” foreign ministry spokesman Wang Wenbin said at a briefing.

He added that China-Russia relations did not target “any third party.”

The “no limit” phrase alluded to a lengthy declaration agreed upon at a meeting between Xi and President Vladimir Putin on the sidelines of the opening of the Beijing Olympic Games, less than three weeks before Russian forces invaded Ukraine.

Xi and Putin hailed a “no limits” friendship, and Xi backed Russia’s demands for security guarantees in Europe and an end to NATO expansion. The two also shared their opposition to “rules-based order” approach to international affairs, prioritized by Western democracies.

Since that start of the Russian invasion, the U.S. has been calling on China not to support the Russian action or help it to overcome the consequences of sanctions imposed against Moscow in response to the war.

That appeal was at the core of Biden’s two-hour phone conversation with Xi on March 18, and of National Security Advisor Jake Sullivan’s meeting in Rome with the Chinese Communist Party’s top foreign affairs official, Yang Jiechi, four days earlier, which a senior administration official described as “an intense seven-hour session reflecting the gravity of the moment.”

On Wednesday, for the first time since the invasion began, the Russian and Chinese foreign ministers met in eastern China, on the sidelines of a conference of countries neighboring Afghanistan.

There was no indication, in public at least, of China cooling on its rhetorical support for Russia.

It said Wang had also called for lessons to be learned from the “crisis” in Ukraine – that “all parties’ legitimate security concerns should be responded to on the basis of mutual respect and indivisible security.”

“Indivisible security” refers specifically to Russia’s contention that the right of countries in eastern Europe to choose to join NATO should not have come at the expense of Russia’s security. Moscow has repeatedly accused the West of violating that principle, including by leaving the alliance’s door open to Ukraine joining in the future.

The CCP organ China Daily quoted Wang as saying at the meeting that “China always upholds objectivity and fairness on international affairs and stands on the right side of history.”

At the start of the talks, Lavrov said Russia and China “are living through a serious stage in the history of international relations.”

“I am convinced that the outcome of this stage will substantially clarify the international situation,” he told Wang. “We will move towards a multipolar, equitable and democratic world order, with you and other like-minded nations.”

After their meeting, Lavrov told reporters they had reviewed a range of areas, in accordance with the Xi-Putin agreement, and were “aimed at the all-round development of Russia-China relations and at building up our foreign policy coordination.”

“A new reality is taking shape: the unipolar world is irretrievably receding into the past and a multi-polar world is being born,” Lavrov said.

No indications of material support

Beijing has declined to condemn the invasion, voicing support for Moscow’s positions on NATO expansion, and limiting its public comments to vague expressions of support for diplomacy and de-escalation.

The U.S. and NATO have accused Chinese officials and state media of amplifying Russian claims of U.S.-supported biological and chemical warfare facilities in Ukraine.

China abstained when the U.N. General Assembly early this month voted to condemn the Russian invasion, and it has also rejected calls for Russia to be excluded from international forums such as the G20.

At the same time, China and Russia both denied earlier media reports saying that Russia had asked China for material help in its offensive in Ukraine.

Four days after the Biden-Xi call, Sullivan said the U.S. has not seen any indication that China has provided weapons to Russia, but would maintain constant monitoring.

On Chinese attempts to help Russia weather the effect of sanctions, Sullivan said the U.S. remained vigilant, while declining again to “lay out in specifics the particular countermeasures we would take” in response to any such actions.

During Biden visit to Europe last week, NATO allies declared collectively that China should not provide military or any other forms of assistance for Russia’s war.

Traveling with Biden in Europe, Sullivan said again that since the president’s call with Xi and since his own meeting with Yang in Rome, “we have not seen the Chinese move forward with the provision of military equipment to Russia. But it’s something we continue to watch every day.”