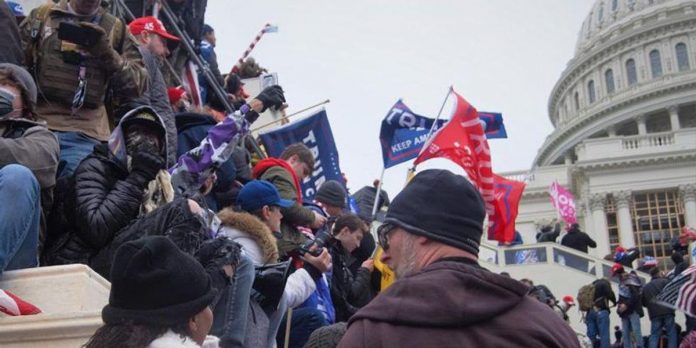 Jan 6, 2020 will be a day that will live on in the memory of this country for years to come. The committee that was founded to investigate the incident is preparing to get its final piece of evidence. Continue reading this story from Raw Story:

The House select committee expects to soon fill in one final piece of the puzzle about the planning for the Jan. 6 insurrection.

Congressional investigators will hear testimony next week they expect will reveal the connections between the Oath Keepers and Proud Boys militia groups, and after that April 5 deposition lawmakers will have obtained all the major evidence from all the crucial moments, reported The Guardian.

“From its nondescript offices boarded up with beige boards and wood-paneled conference rooms with blinds always drawn, the select committee has spent the last eight months working in color-coded teams in an attempt to untangle Trump’s efforts to subvert the 2020 election results,” wrote the newspaper’s Hugo Lowell.

“The gold team is examining Trump’s plans to stop the certification of Biden’s election win with the help of Republican members of Congress, and his pressure campaign on state, local and justice department officials to return himself to office,” Lowell added. “The red team is looking at the Save America rally organizers and the Stop the Steal Movement, while the purple team is scrutinizing the Oath Keepers, the Proud Boys, the 1st Amendment Praetorian and how militia groups helped lead the Trump mob into the Capitol building.”

Senior investigative counsel Sean Tonolli set up a deposition for next week that will give them sworn testimony and material evidence about the militia groups’ connections, to add to raw video footage of a meeting between leaders from the militias in a garage near the Capitol the night before the riot.

The panel is moving into the next phase of its investigation, and lawmakers expect to release their evidence in narrative form in a series of public hearings that have been delayed from April to May that will focus on former president Donald Trump’s wrongdoing, which will then be used to recommend legislation to prevent another insurrection.