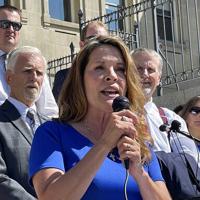 Current Lt. Gov. Janice McGeachin laid out her plans for the first 100 days of her term as Idaho Governor if elected. Her agenda places her to the right of Republican Gov. Brad Little. Continue reading this story from magicvalley.com:

Speaking to reporters and about 50 supporters and onlookers on the Statehouse steps, McGeachin spelled out her 10-point plan that includes banning vaccine and mask mandates, protecting 2nd Amendment rights and reducing Idaho’s dependence on federal money.

“On the very first day of my administration, Idaho will have a governing agenda that is crafted by the people of Idaho,” she declared.

Little officially filed to run on Friday, but for months he has touted tax cuts under his watch and making Idaho the least regulated state.

Little has a huge fundraising advantage, but McGeachin appears to be targeting far-right voters ahead of the Republican primary in May that typically has a much smaller turnout than the general election. In Idaho, the governor and lieutenant governor don’t run on the same ticket.

“The men and women of our state have suffered under four years of neglect and abuse,” McGeachin said. “Even if my opponent is not incompetent, he is certainly indifferent to the thousands of hardworking Idahoans who lost their businesses and livelihoods during his lockdown of our economy.”

Little in March 2020 issued a temporary stay-at-home order when the coronavirus pandemic entered the state and patients overwhelmed some hospitals with medical workers dropping out sick. The order was gradually lifted over the summer, but Idaho’s unemployment rate soared to more than 11%. It has since returned to pre-pandemic levels.

Little, who wore a mask and got vaccinated and encouraged others to do so, never issued a mask or vaccine requirement. He fought President Joe Biden’s vaccine mandates in court.

McGeachin said she would “bring integrity to Idaho’s elections,” without citing any inconsistencies. She also said as governor she’d push for a 50-state forensic audit of the 2020 election that former President Donald Trump Lost.

Trump has endorsed McGeachin, and her supporters carried signs proclaiming the endorsement that included a photo of McGeachin standing next to Trump.

McGeachin said that as part of her 2nd Amendment plans, she would offer incentives for increased production of firearms and ammunition in Idaho.

She also said, as governor, she would mandate an “Idaho-first” policy for state government.

“Under my watch, Idaho state agencies will know they must reply to your emails, answer your phone calls and work on issues you care about,” she said.

She also said she wouldn’t allow tax write-offs to allow Mark Zuckerberg, the billionaire Facebook founder who wants to build a facility in Idaho, to “steal our water and expand his anti-American company to Idaho.”

She touted what she called common-sense growth.

“We will stop the giveaways for out-of-state developers, and we will make the get-rich-quick builders pay for new schools, roads and infrastructure,” she said, without going into details.