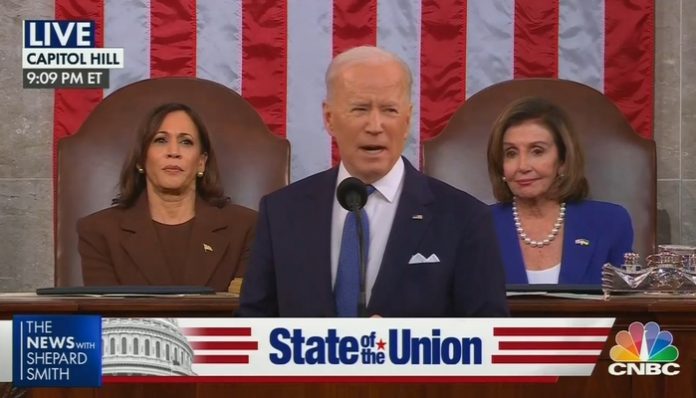 There were a lot of topics mentioned in President Biden’s State of the Union speech and how those points landed with you depends on what America you’re currently seeing. Continue reading this story from Newsbusters:

By now you may have forgotten President Joe Biden gave his State of the Union address last week. On Monday, Biden walked across the White House lawn alone and in a mask. On Tuesday, he walked into a crowd of House members rejoicing that no more masks were needed. It was the perfect metaphor for Biden at governance and Biden at speech.

The State of the Union address was not for you or for me unless you are a moderate, Democrat-leaning voter who is frustrated with Biden and looking at the GOP for November. Despite all the talk about multiple audiences, Biden is trying to keep wavering moderate voters on board.

He hit on, for example, securing the border. That’s an issue he has done nothing with, but it shows up in the polling as a problem for Democrats, so he mentioned it. He mentioned funding police too. That is another area in which polls show voters trust Republicans more than Democrats. He needs to reassure suburban voters that he is not the radical the loudest Democratic representatives are.

He called Afghanistan an “extraordinary success,” but it polls terribly for him, so he chose not to spend time on it. The whole of the speech after opening about Ukraine sounded like it was written by pollsters panicked by the GOP’s current numbers.

The problem for Biden and the Democrats is simple. This speech is going to be forgotten — if it’s not already forgotten — but the public will still see empty store shelves, high prices and the cost of filling up their cars. The president offered nothing to address these issues. In fact, it is now widely accepted his COVID-19 relief package sparked inflation; the president not only defended it but called for even more spending.

Biden started with a unifying moment about Ukraine. He had applause from both the Republicans and Democrats. He then pivoted straight into an attack on the Trump tax cuts with a lie about those cuts benefiting the top 1%. Even the supposed fact-checkers rebut that.

He continued to call on Congress to pass an agenda Congress has repeatedly failed to pass and to advocate for positions most Americans reject. There was no reset. He doubled down on progressivism. He doubled down on growing government. He refused to offer gas price relief but instead announced he wants to expand the Green New Deal.

Forget the flubs. Forget the rhetorical stumbles over “Iranians” instead of “Ukrainians,” etc. This is Biden. He is not the best orator. Forgive him those things.

The problem with the speech is that Biden offered Americans a vision of what they’ve already rejected and bookended it with calls for unity after pushing policies that led to firing Americans for not taking a vaccine.

It is really hard to tell Americans we need to get past our differences after spending two years maligning those who wouldn’t go along with his agenda. A few months ago, Biden said Americans who opposed his agenda were on the side of Jefferson Davis and those who did not get the vaccine were in for a winter of death. Now, at 40% in some polls, he is calling for unity and urging people to stop politicizing COVID-19. But he never offered an apology for his own harsh words and his turn comes only after leaked Democrat polling showing the public is ready to get on with life.

The president may get a bump in the polls over Ukraine, but the polling will get trumped by gas prices and bare shelves.