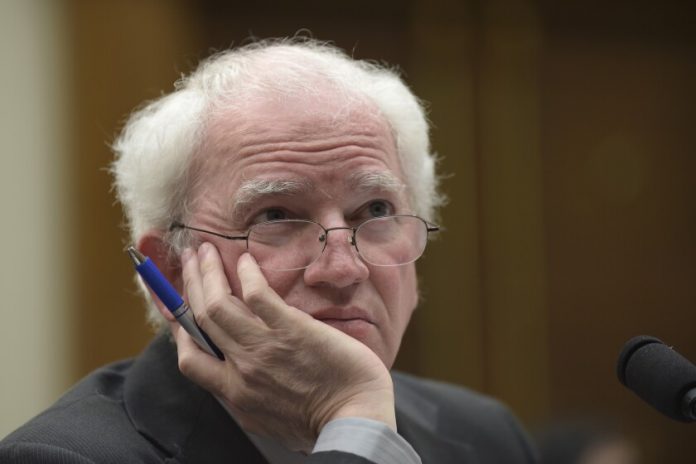 An ethics investigation into Orange County attorney John Eastman seeks to discover whether laws were violated while advising President Trump on how he could overturn the 2020 Presidential election results. Continue reading this story from the Los Angeles Times:

Orange County attorney John Eastman is at the center of an ethics investigation into whether he violated laws while advising President Trump on how he could overturn his election defeat in 2020, the State Bar of California said Tuesday.

Eastman, a former professor and dean at Chapman University’s Fowler School of Law, emerged as a key legal advisor to Trump in the weeks after it was apparent he had lost the election to Joe Biden. Eastman wrote two legal memos that advised Vice President Mike Pence he could declare that the results in several states were disputed and therefore their electoral votes would go uncounted. Doing so would have injected a new element of uncertainty and opened the door for several state legislatures to recast their votes for Trump.

The State Bar’s chief trial counsel, George Cardona, announced Tuesday that Eastman has been the center of an investigation since September.

“A number of individuals and entities have brought to the State Bar’s attention press reports, court filings, and other public documents detailing Mr. Eastman’s conduct,” Cardona said in a statement.

“We want to thank those who took the time to bring to our attention this information, which serves as the starting point for our investigation. We will be proceeding with a single State Bar investigation in which we will continue to gather and analyze relevant evidence and go wherever it leads us.”

Eastman was not immediately available for comment Tuesday. The phone number listed for his law practice in Anaheim was busy.

Attorney Randall Miller, who is representing Eastman in the state bar probe, said his client expects the investigation will exonerate him.

“Dr. Eastman, a nationally recognized constitutional attorney and scholar, represented former President Trump in several election challenges,” Miller wrote in a statement. “As was his duty as an attorney, Dr. Eastman zealously represented his client, comprehensively exploring legal and constitutional means to advance his client’s interests.”

Eastman is currently challenging a subpoena from the House Select Committee to investigate the Jan. 6 attack. The committee is seeking documents and emails Eastman sent from his Chapman University email address, according to court records filed in a California federal court.

Eastman was hired at Chapman’s law school in 1999. He was dean of the school from June 2007 to January 2010, when he stepped down to run unsuccessfully for California attorney general. He remained on the faculty until January 2021, teaching courses in constitutional law, property law, legal history and the 1st Amendment.

Eastman is also the founding director of the Center for Constitutional Jurisprudence, a public interest law firm affiliated with the Claremont Institute. The institute did not immediately respond to a request for comment Tuesday.

In early January 2021, more than 100 Chapman faculty and others affiliated with the university signed a letter calling on the private school to take action against Eastman for his role in the events of Jan. 6, when a mob of Trump supporters stormed the U.S. Capitol.

“Dr. Eastman’s departure closes this challenging chapter for Chapman and provides the most immediate and certain path forward for both the Chapman community and Dr. Eastman,” Struppa wrote.

“Lawyers, particularly those who represent elected and appointed officials, have a solemn duty to the public to advise their clients within the four corners of the law, and to ensure that they do not allow themselves to become the tools by which those officials seek to undermine democratic governance,” the group wrote in a letter.

At the time, Eastman said, “I trust the bar association will see this as the politically motivated and defamatory attack on my legal representation of a controversial client that it is and summarily dismiss it. But if not, I look forward to responding in full to every false assertion.”

Christine P. Sun, senior vice president of legal at the States United Democracy Center, said in a statement on Tuesday that the investigation is a “welcome and necessary step forward to holding democracy violators accountable, including those who seek to use their legal credentials to undermine the foundations of our democracy.”

The retirement of law professor John Eastman comes after days of campus controversy about his appearance at the “Save America” rally last week.

Wylie Aitken, a longtime Orange County attorney and Chapman trustee, said he commends the state bar for launching an investigation into Eastman’s actions, which he called an “assault on democracy.”

“I hope they will act on this because this is not a free speech issue, as some would like to characterize it,” he said.

Chemerinsky, UC Berkeley’s law school dean, said it’s crucial that the nation does not trivialize what happened on Jan. 6.

“John Eastman was the architect of an attempted coup in this country,” Chemerinsky told The Times on Tuesday. “It’s unlike anything we’ve ever seen in this country, as he fomented the coup, and attempted to disrupt the hallmarks of democracy: the peaceful transfer of power.”

Chemerinsky does not think any attorney should be disciplined for protected free speech, but Eastman’s actions went far beyond the type of speech that advocates for a position.

“It’s obvious, I believe, that there is enough there to investigate,” Chemerinsky said.