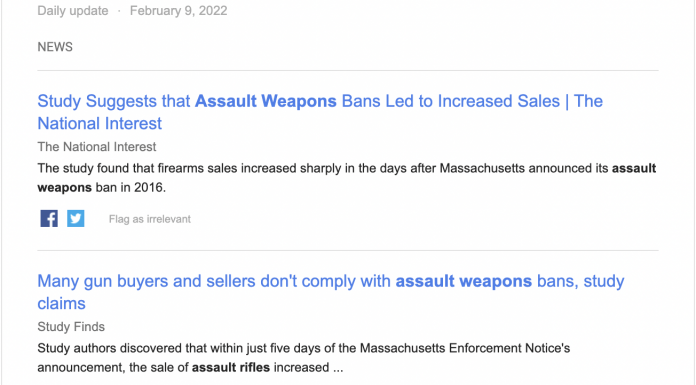 In two shocking headlines that surprised me not at all (with another below those as well), the news articles that populated my daily download for the term ‘Assault Weapon’ all dealt with the disastrous course of action that is enforcing an assault weapon ban.

The first one, bans lead to increased sales, thus doing the opposite of what a ban is supposed to accomplish by decreasing the supply of ‘dangerous’ arms in the wild. We’ve seen the unbridled evidence of this every ban, small and large, since the national one in 1994. That one had the least impact on driving pre-ban sales as communication about it was slower and more obscured. It was also most widely supported as, at the time, it sounded like a good idea to enough people.

Prohibition, with caveats, had never been tried before after all. [/sarc]

Wherever a ban is proposed, purchases go up to get in before it is illegal. None of these bans have the gumption to enforce themselves with an iron will, not even California’s draconian measures are actually enforced all that well. Plenty of people with completely prohibited (in California) rifles that are perfectly functional, legal, and safe as soon as you cross into a less insane state. California’s law enforcement community do not have the resources, time in a lifetime, nor suicidal wish to go hard after these.

So the weapons just roll in when other crimes are associated with them and then California blames their neighbors for not banning them too. That’s the safest route afterall, do nothing meaningful and shift the blame. Heaven and all the stars above forbid you do things like actual meaningful criminal justice reform, they’d have to let out all the people the Vice-President locked up.

Inconsistent nonsense undermines the authority of law, the belief in the correctness of law, and trust of and in politicians to make law that is just and right. There’s a reason satisfaction with our politicos, regardless of partisanship, is in the rolling dumpster fire territory and this gun control nonsense does not assist at all.

Gun control is only popular in the entrenched ignorance demographics, those who don’t know and who do not care to know how badly the policies harm people who are not (ostensibly) the targets gun control are supposed to go after. Criminals who ‘shouldn’t have firearms’ and such. The ‘wrong’ people, despite very poorly defining who the wrong people are.

But hey! Did you here we’re giving out crack pipes? $30,000,000.00 worth of crack pipes! Did we decriminalize substance use and provide a clean method of use to foster treatment?

I smell entrapment lawsuits in the future.