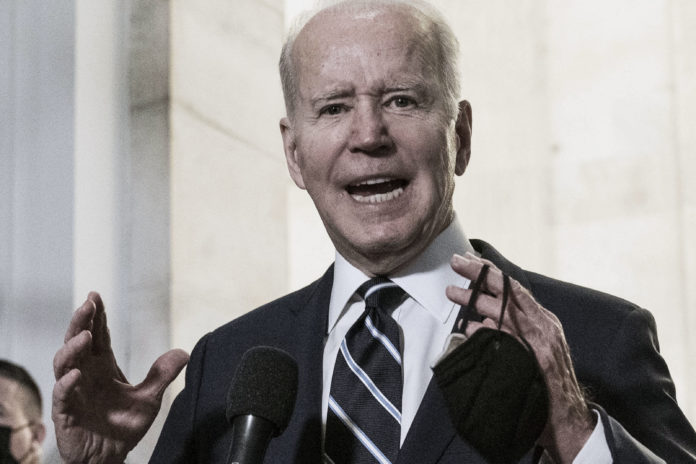 How far the Second Amendment goes has always been a hotly debated topic. Supporters claim that it is absolute, while once again President Joe Biden told reporters, “There’s no amendment that’s absolute. When the amendment was passed, it didn’t say anybody can own a gun – any kind of weapon.” Continue reading this story from The Truth about Guns:

Joe Biden went off-script again during his remarks to the media in New York City when he repeated two blatant falsehoods, one about the Second Amendment and the other about a federal law that prevents junk lawsuits against gunmakers, the Citizens Committee for the Right to Keep and Bear Arms said today.

“When it comes to gun rights and the Second Amendment, Joe Biden is a recidivist congenital liar,” said CCRKBA Chairman Alan Gottlieb. “The guy just can’t resist perpetuating a lie that’s already gotten him into trouble with the Washington Post Fact Checker, earning an embarrassing ‘Four Pinocchios,’ but he continues to misrepresent history and the right to keep and bear arms.”

In New York, Biden told reporters, “There’s no amendment that’s absolute. When the amendment was passed, it didn’t say anybody can own a gun — any kind of gun — and any kind of weapon.”

“The Second Amendment did not place limits on the kinds of arms people could own, nor did it say anything about who could own guns,” Gottlieb said. “Biden is making that up out of thin air.”

Biden also restated his hope to repeal the Protection of Lawful Commerce in Arms Act, a federal law that prevents junk lawsuits against the firearms industry. Gun makers can still be sued for such things as negligence, and Biden knows it.

But in his remarks to the media, Biden said this about the firearms industry: “They’re the only industry in America that is exempted from being able to be sued by the public. Only one… They’ve got to be held responsible for the things that they do that are irresponsible.”

“Joe Biden needs to be held responsible for the irresponsible things he says, as well,” Gottlieb stated. “Throughout his entire career, Biden has become infamous for his canards and gaffes, especially when it comes to guns. He has absolutely no credibility within the firearms community except when he admits he wants to ban guns, and we’re doing everything we can to stop him.”

With more than 650,000 members and supporters nationwide, the Citizens Committee for the Right to Keep and Bear Arms (www.ccrkba.org) is one of the nation’s premier gun rights organizations. As a non-profit organization, the Citizens Committee is dedicated to preserving firearms freedoms through active lobbying of elected officials and facilitating grass-roots organization of gun rights activists in local communities throughout the United States.