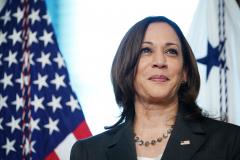 Now the speculation on who Joe Biden will select to replace retiring justice Stephen Breyer. There is talk of a nomination for current Vice President Kamala Harris. Continue reading this story from CNS News:

There are several reasons why Joe Biden may want to nominate Kamala Harris. (Photo credit: MANDEL NGAN/AFP via Getty Images)

The announcement on Wednesday morning of the coming retirement of Justice Stephen Breyer from the Supreme Court immediately launched speculation from all political corners on what it meant for the president and for the country.

The president will pick a left-wing judge, which is his right to do so (he won the election and elections have consequences) but will it be a sensible liberal or a maniac like Justice Sonia Sotomayor, who was last seen spouting rambling nonsense about how many kids have died from COVID-19. The appointment can’t change the balance of power on the Court, currently 6-3 in favor of conservatives. But that 6-3 balance is not solid and several of the conservatives have sided occasionally with the liberal minority on some issues. A Sotomayor-like nominee might widen the gap and solidify the conservative majority.

Another reason this appointment might backfire on the president is that while most Americans care little and know less about the Supreme Court (a Marquette University poll released Thursday showed only 21 percent had an opinion about Justice Breyer), Republican voters are much more energized by Supreme Court nomination battles than Democrats and Independents. With all the other problems the president is facing, he really doesn’t need more energized Republicans voting in the midterms.

But with so little going his way, he is likely to grasp at a successful nomination fight as a great achievement. But with majority control of the Senate, most voters not caring about the Court, and more worried about the price of gas, inflation, empty shelves, and the persistence of COVID-19, and with no change in the balance of the Court, his victory would make nothing better for him.

There is one move he could make that might improve his political standing and it’s so obvious I’m surprised more aren’t talking about it. Nominate the current vice president, Kamala Harris.

It makes perfect sense. She is a former state attorney general, so she has some legal background (emphasize the word some). She was a senator, so assuming she made some friends there during her brief tenure, she would have some advocates during her confirmation hearings. Being a woman of color, she could play the victim card when Republicans, during her confirmation hearings, challenge her on anything. Supreme Court justices rarely speak in public, so her vacuous public statements and ridiculous cackle would no longer stain the president’s cabinet. She would be a reliable leftist vote on the Supreme Court. And, the president would remove an anchor from around his neck and perhaps find a vice president who was up to the job and would add something to his re-election effort.

Now, the president could play it safe and find a mediocre but reliable leftist vote without the significant baggage that Kamala brings with her. The president is trying to govern with a razor-thin majority in the Senate, one divided into two factions who really don’t like each other. But the progressives love Kamala while the few moderates may be looking for a way to express their dissatisfaction with the leftward drift of the president and the constant public trashing they suffer at the hands of the progressives. What easier way for Joe Manchin to express his discomfort than to vote against the vice president. It only takes one Democrat to kill the nomination and I can’t see Manchin being overly pleased with voting for her or oblivious to the idea that a no vote on her would be a great way to strike back.

But all in all, I think the president will find it hard to resist her nomination, with pressure from the progressives and the chance to find a competent and effective vice president to replace her and improve his political fortunes. However, one final thought: Given his record, Afghanistan, COVID-19, inflation, supply chain issues, and picking Harris in the first place, we are left with the observation that President Barack Obama reportedly made about his vice president: Never underestimate Joe’s ability to f*** it up.

Grab a chair, pass the popcorn, and sit back and watch.