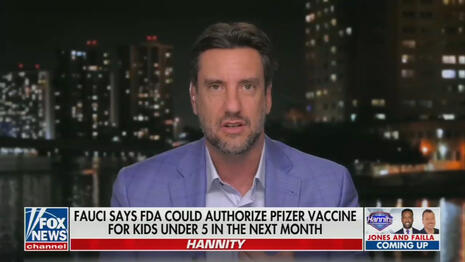 Big Tech has been met with calls of censorship and unfair practices for a while now. One of the most recent calls for action comes from politics and sports commentator Clay Travis. Continue reading this story from Newsbusters:

Travis called a penalty against Big Tech. “YouTube has refused to post our @clayandbuck interview with @RandPaul. Think about this for a moment: YouTube is disallowing a doctor and sitting US senator’s interview to be shared. This is madness,” Travis warned in a Jan. 24 tweet.

The OutKick founder and The Clay Travis and Buck Sexton Show host noted further that censoring a legitimate, elected American politician because of his opinions is no less than an indictment of America’s political system as a whole: “Regardless of what you think of @RandPaul’s opinions, he is one of 100 democratically elected senators. It’s the very antithesis of democracy to not allow American voters to hear the opinions of their elected officials. YouTube should be ashamed.”

The video interview, Sen. Paul on ENDING Mandates, Omicron and Fauci’s Future, is available on Rumble as of the publication of this article. The video is summarized by the channel as an interview surveying “a number of topics from bringing the mandates to an end to when Anthony Fauci will retire.”

Paul’s feud with YouTube already made headlines this month.

YouTube previously censored his questioning of the COVID-19 narrative around what masks are effective at stopping disease transmission. Paul demanded an apology from YouTube after he shared a breaking story from the Centers for Disease Control and Prevention conceding cloth masks are less effective. “Does this mean snot-nosed censors at YouTube will come to my office and kiss my…and admit I was right?,” Paul remarked in a Jan. 15 tweet.

Paul left YouTube and declared his “exodus” from the platform in a Jan. 3 press release as he embraced Rumble instead. Paul slammed YouTube as “the worst censor of all,” for punishing his skepticism over cloth masks and COVID-19:

Over the last year, YouTube has continued to wage its dangerous, anti-progress of science war against free speech, choosing to act in lockstep with government and ban videos posted by Dr. Paul that dared to contradict the government’s position.

Conservatives are under attack. Contact YouTube at (650) 253-0000 and demand that Big Tech mirror the First Amendment while providing transparency, clarity on “hate speech” and equal footing for conservatives. If you have been censored, contact us at the Media Research Center contact form, and help us hold Big Tech accountable.