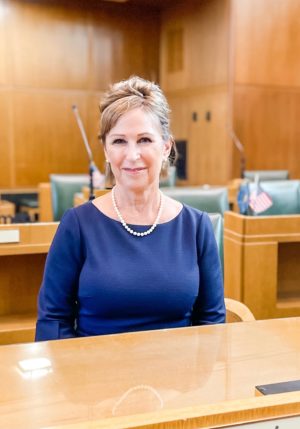 Southern Oregon could have a new voice in Salem in the form of State Representative Christine Goodwin. Goodwin announced that she will be running for election in House District 4, continue reading for more information courtesy of KQEN News Radio:

On Wednesday, State Representative Christine Goodwin announced that she will run for election in Oregon House District 4 to replace retiring Representative Duane Stark of Grants Pass.

Goodwin is currently serving out the remaining term of late Representative Gary Leif of Roseburg, in House District 2. A release said due to the state’s new district lines moving north, Representative Goodwin has the opportunity to serve in HD4.

The release said Goodwin is looking forward to carrying on “…the legacy of leadership House District 4 has had under Representative Stark’s 7 years of honorable tenure”. Goodwin said there are some serious battles ahead in Salem. She said, “Cap and Trade is a real threat to our rural way of life, Democrats continue to erode our 2nd amendment rights, and government agencies are forcing egregious restrictions on our civil liberties”.

Prior to serving in the Legislature, Goodwin was a Douglas County Interim Commissioner, served as a Planning Commissioner, and chaired the South Umpqua School District Board.