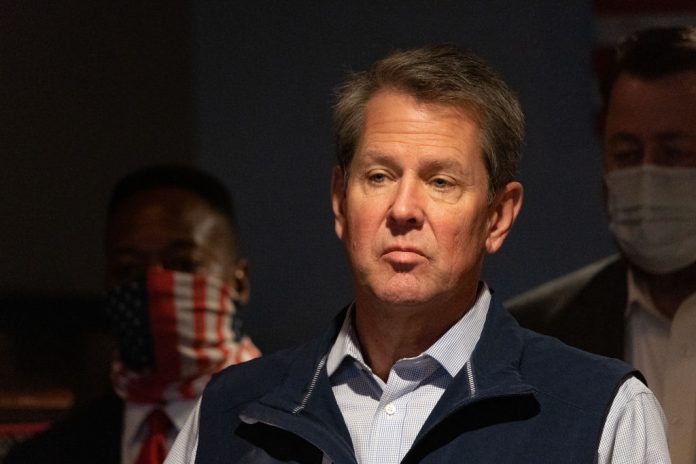 NewsOne does an admirable job of both victim blaming and putting the problem of Georgia’s violence on Brian Kemp, the Governor. Read below.

Georgia Gov. Brian Kemp pushed for a new state gun law during a press conference on Wednesday at the Adventure Outdoors, an outdoor sports store located about 15 miles Northwest of Atlanta.

The new law would do away with the license needed to carry a handgun in public, openly or concealed on one’s body.

During the press conference Kemp, who spoke to a nearly all-white audience, plugged right-ring talking points and claimed that Georgians needs looser gun laws to feel safer in their communities.

“Building a safer, stronger Georgia starts with hardworking Georgians having the ability to protect themselves and their families, said Kemp. “In the face of rising violent crime across the country, law-abiding citizens should have their constitutional rights protected.”

Kemp, like many Republicans, have used fear to create a false narrative that your family isn’t safe because you need a license to open carry.

Gun violence is a serious problem in the black community and a solution was never mentioned by Gov. Kemp as he touted the 2nd amendment in front of his NRA buddies.

Georgia’s laws currently require residents to obtain a license to carry a loaded handgun in public. This includes outside of their homes, in their cars, and at businesses. Georgians are allowed to carry rifles and shotguns in some places, as well as carry unloaded guns in cases.

Many Black people don’t oppose gun laws and gun ownership among black Americans is at an all-time high.

But why should Black Americans support laws that do nothing to benefit their communities, which bear most of the brunt from gun violence?

As the election season in Georgia begins to hit its stride, Kemp and the Republicans will continue to promote the 2nd Amendment just as they did during his first campaign for governor. Only this time he will have to deal with a stronger, more polished Stacey Abrams, who has spent the last three years preparing to defeat him.

Take a look at the press conference below.

1.) While the shooting victims in Atlanta were predominantly Black residents, NewsOne conveniently omits the perpetrators… Black men, the vast majority of the victims, are overwhelmingly shot by Black men.

2.) The violence in Atlanta, like other major urban centers (Chicago for instance), is usually localized to a few regions. There are lawful areas with lower instances of violence and crime and there are areas where the incidents spike. These regions encompass low income communities, where crime does in fact pay the bills, and one of the currencies of crime is violence.

3.) “But why should Black Americans support laws that do nothing to benefit their communities, which bear most of the brunt from gun violence?” This is a bold presumption. Openly stating that removing a not insignificant cost of access to the right of self defense from a vulnerable segment of the population is harmful. Making lawful self defense a more accessible and less costly endeavor among the most vulnerable community assailed is harmful, that is the presumption in that interrogative.

One can only assume then, that they believe one of two things. They believe the Black community of Georgia is incapable of exercising free agency of their right to self defense and arms responsibly, which seems highly racially insensitive. Or, they believe that the exercise of self defense and the right to bear arms is uniquely a privilege of those who can afford it and is to be kept from those who can’t exercise it by a financial dividing wall. It cannot simply be that they believe the portions of Atlanta where arms are used illegally, in the furtherance of other illegal activities, and often in the hands of those not legally able to possess them in the first place, will somehow be solved by changing the financial cost of legally bearing arms for lawful purposes, could it?