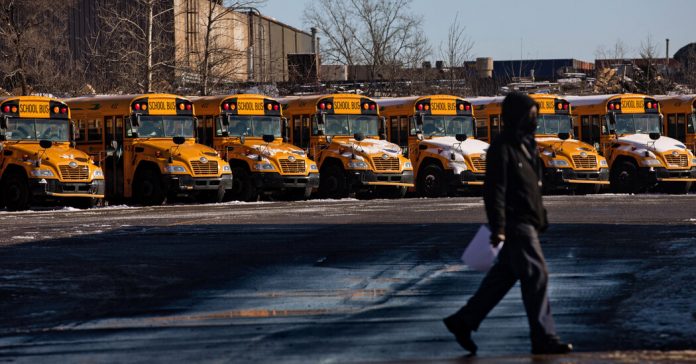 The New York Times has penned a piece looking at the chaos the responses to COVID-19 has caused in the lives of everyone, especially our youngest.
Children have the most regimented and controlled lives of any in our nation, they do not have self autonomy for the most part and are locked into the places we expect them to be while they are being raised. This means school, activities, sports, learning camps, and all the like which we had ingrained into the very fabric of their childhood processes.
We destroyed that structure for them and instituted very poor replacements for the most part…
Read,

For the past two years, Americans have accepted more harm to children in exchange for less harm to adults.

American children are starting 2022 in crisis.

I have long been aware that the pandemic was upending children’s lives. But until I spent time pulling together data and reading reports, I did not understand just how alarming the situation had become.

Today’s newsletter offers an overview of that crisis.

Children fell far behind in school during the first year of the pandemic and have not caught up. Among third through eighth graders, math and reading levels were all lower than normal this fall, according to NWEA, a research group. The shortfalls were largest for Black and Hispanic students, as well as students in schools with high poverty rates.

“We haven’t seen this kind of academic achievement crisis in living memory,” Michael Petrilli of the Thomas B. Fordham Institute told Politico.

Many children and teenagers are experiencing mental health problems, aggravated by the isolation and disruption of the pandemic. Three medical groups, including the American Academy of Pediatrics, recently declared a national state of emergency in children’s mental health. They cited “dramatic increases in emergency department visits for all mental health emergencies.”

Gun violence against children has increased, as part of a broader nationwide rise in crime. In Chicago, for example, 101 residents under age 20 were murdered last year, up from 76 in 2019. School shootings have also risen: The Washington Post counted 42 last year in the U.S., the most on record and up from 27 in 2019.

When The Morning asked parents and teachers about the situation in their local schools, we heard an outpouring of anguish:

Behavior problems have increased. “Schools across the country say they’re seeing an uptick in disruptive behaviors,” Kalyn Belsha of Chalkbeat reported. “Some are obvious and visible, like students trashing bathrooms, fighting over social media posts or running out of classrooms. Others are quieter calls for help, like students putting their head down and refusing to talk.”

Kelli Tuttle, a teacher in Madison, Wis., told us, “There is a lot of swearing, vandalism and some fights.” A teacher in Northern California said she had witnessed the “meanest, most inappropriate comments to teachers” in her 15 years of working in schools.

The Omicron variant is now scrambling children’s lives again. Most schools have stayed open this week, but many have canceled sports, plays and other activities. Some districts have closed schools, for a day or more, despite evidence that most children struggle to learn remotely, as my colleague Dana Goldstein reports. Closings are taking place in Atlanta, Cleveland, Milwaukee, Newark and several New York City suburbs, among other places.

“It’s chaos,” Keri Rodrigues, president of the National Parents Union, told Dana. “The No. 1 thing that parents and families are crying out for is stability.”

Read the remainder at the link,