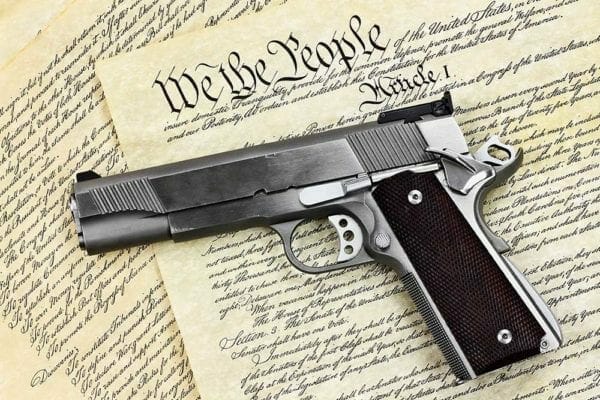 AmmoLand has a take on the recent piece from USA Today ‘Down the barrel of a gun’ and the publications attempt to associate gun ownership with extremism and white supremacy. Because of course they do, it’s the only card they can play. Gun control arguments wither under scrutiny as they all tend to amount to a ‘we hope this works’ measure without reasonable assurance of significant (or any) positive effects. Gun bans, buybacks, feature bans, capacity bans, ‘Gun Free Zones’ all amount to so much security theatre and wishful thinking, hoping that nobody chooses violence that day.

But that didn’t stop USA Today from taking the fringe right and pointing to it as the supposedly logical end point for gun owners. This with the 2nd Amendment becoming an increasingly non-partisan issue at the grass roots level, while the extremes at both ends concern the majority middle. The average gun owner owns a gun to protect themselves, and then their community, the exact purpose of the 2nd.

U.S.A. – -(Ammoland.com)- “Down the barrel of a gun,” a USA Today headline begins. “How Second Amendment activism can be a gateway to extremist ideologies.”

Collectors buy militaria at gun shows. Some of it is Nazi memorabilia. What better way to conflate patriots who believe in the government of limited enumeration of powers established “to secure the Blessings of Liberty” with “the extremist far-right”?

To emphasize the point, they call on a former “leader of the National Socialist Movement,” apparently oblivious to the reality that being a national socialist has nothing to do with what the freedom-minded are about. And as much as latter-day collectivists try to distance themselves and project their hatred onto those who emphasize the rights of individuals over the powers of a centralized violence monopoly, they can only ignore and misdirect from the truth, they cannot obliterate it.

“It is now clear beyond all reasonable doubt that Hitler and his associates believed they were socialists, and that others, including democratic socialists, thought so too.”

The attack piece goes on to use Alinsky Rule 5 ridicule and dismiss as unfounded “the fear that the government is intent on taking Americans’ guns away,” conveniently not exploring, let alone even mentioning, the numerous and publicized calls from prominent gun-grabbers to do just that (and don’t tell us, moron, tell Beto). It also fails to inform readers that the cited “authority” for making that claim, described merely as “an activist who has tracked white supremacists since the 1990s,” is also known as “the father” of doxing.

But the point is made. Second Amendment activists have been linked with Nazis and white supremacists, just like Merrick Garland, Christopher Wray, “leading” Democrats, and the DSM, all of whom echo and amplify a self-serving “greatest threat” meme, want.

… Read on below at the link.