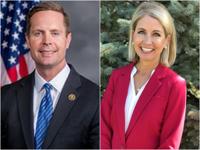 That’s a bold move. Let’s see how it works out for them.

Illinois is a Blue State. Chicago keeps in that way. But southern Illinois tends to lean much further to the right on the political spectrum than the Windy City. So it could make more sense to run as a Trump supporter, and perhaps the bigger Trump supporter, in their district as opposed to a strategy like that crashing and burning in Chicago itself.

ILLINOIS (WTHI) – Two Illinois republicans are competing to represent the state’s 15th district in Congress and both claim to be the bigger former President Donald Trump supporter.

With the new district lines in place this election season, both republicans have announced their plans to run in the new 15th district. It includes Edgar County.

Congresswoman Miller lives outside the new 15th district. Congressman Davis lives inside the new district, which is why he is choosing to run in the new 15th instead of the 13th district. The United States Constitution does not require a candidate for congress to live in the district they represent, just the state.

“Mary Miller doesn’t live in the 15th District, supports the Never Trump ticket for IL Gov, and voted with Democrats like AOC to defund our military and block a pay raise for our troops.” Rodney Davis

Miller announced her political intentions this weekend by saying former President Donald Trump has endorsed her. The Davis campaign quickly responded by questioning her allegiance to the former president.

You can see the full statements from both campaigns below.

“President Donald Trump inspired me to run in 2020 because our country needs principled conservatives in Congress who always put America First,” said Congresswoman Miller.
“Today, President Trump is endorsing me because I am a conservative fighter who is not afraid to take on the DC swamp.”
“I am not a career politician, and running for office is not my life’s ambition,” said Miller. “My life is spent in the real world, on my small family farm with my husband Chris, where we were blessed to raise our seven children and welcome our seventeen grandchildren. I bring those values to Washington, not the other way around.”
Elected in 2020 with President Trump’s support as an America First conservative, Congresswoman Mary Miller received 73.4% of the vote in the 15th District. She has been a strong supporter of President Trump and opposed efforts by Nancy Pelosi, Adam Kinzinger, and Liz Cheney to attack President Trump through the political “witch hunt” January 6th Commission.
“I voted against Joe Biden’s red-flag gun confiscation efforts, which violate the Second Amendment rights of American citizens,” said Miller, who has the most conservative voting record of any member from Illinois. “I was endorsed by the NRA in 2020 and I’m the only member from Illinois with an A rating from the Gun Owners of America for always supporting the Second Amendment.”
“I’m proud to be the only member of Congress from Illinois who is fighting to impeach Joe Biden and the lawless Biden Cabinet for leaving our border exposed to an invasion of illegal immigration,” said Miller. “I am the only member from Illinois who has fought every effort by Joe Biden to use COVID vaccine mandates to fire Americans from their jobs and I opposed funding COVID vaccine databases that share information with the federal government.”
As a Pro-Life mother and grandmother, Congresswoman Miller serves as an advocate for the unborn, giving a voice to the voiceless in the womb. “When Democrats pushed for taxpayer-funded chemical abortion, I led the fight to ban taxpayer-funded chemical abortion with the Protecting Life on College Campus Act,” said Miller.
Congresswoman Miller is in a strong position to win re-election in the new 15thCongressional District, which gave President Trump 68 percent of the vote in 2020.
“I won’t allow corrupt Democrats like JB Pritzker to cut backroom deals to draw me out of the district I represent, because conservative voters who stand with President Trump deserve a Pro-Second Amendment, Pro-Life, America First voice in Congress,” said Miller.
“With hard work, prayer, and faith in our country, conservatives will take back the House and Make America Great Again.”

“Mary Miller is only an outsider in the sense that she doesn’t live in the 15thDistrict. She’s a carpetbagger and Chicagoland native. Miller is so desperate to stay in Congress she’s running in a district she doesn’t live in, just like her husband. The Millers are taking a page out of the Springfield political insider playbook. Politics is their family business.
“Even worse, Miller supports the Never Trump ticket for Illinois Governor and refused to vote against Nancy Pelosi’s sham, partisan 1/6 Select Committee. All Mary Miller has to show for her time in Congress is quoting Hitler and voting with Democrats like AOC and the far left squad to defund our military and block a pay raise for our troops. That’s shameful. It’s clear that Mary Miller is all talk, no action.
“Rodney Davis is a conservative who gets things done. He’s already been hard at work highlighting his conservative accomplishments and work with President Trump during his time in office. That’s why he’s earned support from countless grassroots Republican leaders in the district. Our campaign looks forward to educating voters on how Rodney is an effective conservative member of Congress and Mary is not.”