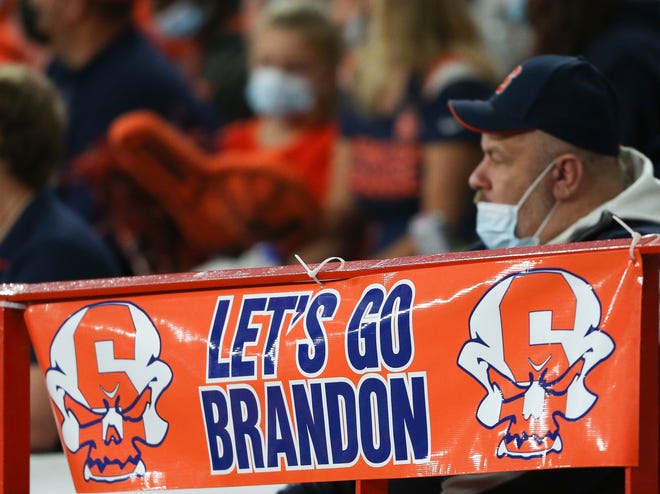 This certainly seems to be a case of the pot calling the kettle black. While it is not disagreeable to see civility being encouraged to return to political discourse, it is hardly likely to do so without acknowledging the faults of your own chosen team. Four years were spent outright hating the previous president if you were his opponent, an effigial beheading by a major celebrity comes to mind, yet the tongue in cheek ‘Let’s go Brandon’ is now too far?

These arguments always feel like it is only wrong if the displeasure is expressed toward your own team, it is only wrong to do to people you agree with and not wrong to harass those you may disagree with. Civility for me but not for thee, as it were.

But read below, click-thru for the full article, and see for yourself. Can’t disagree with an increase in civility, but I am certain those who are calling for it should start by showing it and are often failing to do so. That same disingenuous and self-unaware attitude helped elect the man they so despised, and his successor, in the first place and it is among the most virulent of reasons the political discourse is so discourteous.

I was in middle school four decades ago when the first — and only — shopping mall opened in my native Venango County.

Today it still signifies our standing —– diminished and again, isolated.

Who knew then how fickle those shiny retailers would be when globalization got its licks in?

I tried to lend support on a Sunday at the height of the holiday shopping season only to find some stores would not open until noon and others not at all. There were few people and even less holiday cheer. And the kicker despoiling the mood? Visible from most angles in the long straight main hall, a giant flag shouting #FJB complete with a “Let’s go Brandon” explainer for any who missed the contemptible point.

In the glass case hawking the flag were items repeating the false claim that the failed, former president, defeated by more than 7 million votes and necessary margins in key swing states, won, along with items displaying the Confederate flag —symbol of a diabolical way of life inimical to American values now a signifier of what, exactly? Especially when flown on the same pole as Old Glory as is the fashion in these parts. I will never understand.

Vendors sell this dreck at roadside stands, flea markets and the like. In lawns, wooden Bigfoot silhouettes and garden gazing balls mingle with flags telling the president, to well, you know what, and worse, like the ones telling you to do the same thing to your feelings.

This militant, violence-tinged mindset is comfortable asserting itself not only in residential neighborhoods and the shopping mall. It’s also commodified and charging the air in rural supply stores that sell everything from chicken feed to AR-15-style rifles.

The U.S. House Select Committee investigating Jan. 6  holds potential to return us to a shared understanding of reality and accountability. But other institutional guardrails promised the same yet faltered due to lack of fidelity by those sworn to uphold them.

Generations died to defend our way of life and defeat forces of oppression and hatred, it’s true. But God forbid anyone reach for an AR to solve this mess.

Out of many we are one. Let’s stay with that truth, swap the rage for compassion (as we do in most other spheres of our lives) and just maybe see each other more clearly, as the president has said, as fellow Americans.

We likely don’t face a happy year. But let it, and us, be new.