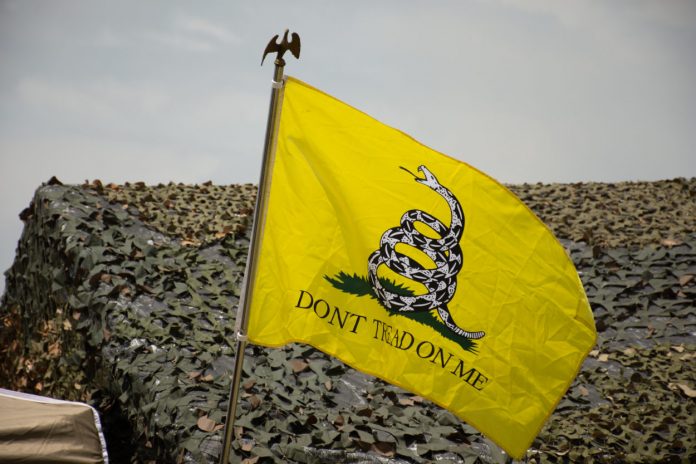 While The Libertarian Republic has an breakdown of the 2A with a link to a flag, we here at 1stFH also suggest supporting the FPC, NRA-ILA, and NSSF with as much as you are able to give. These are organizations that go to gloves (court) in order to continue the preservation and restoration of our civil rights. Flag flying is awesome, some of them are really creative, but it is ultimately a court room where a great many of these victories are won for us.
Now from The Libertarian Republic,

To show your support for this amendment, you can purchase, for example, the Don’t Tread on Me flag. It is a historical American flag that first flew during the American Revolution.

The History of the Second Amendment

The Second Amendment was ratified in 1791 as part of the Bill of Rights. The amendment stated that “a well-regulated militia, being necessary to the security of a free State, the right of the people to keep and bear arms, shall not be infringed.”

The amendment is often cited in support of gun ownership rights.

The Origins of the Second Amendment

The Second Amendment was based on the English Bill of Rights of 1689. That bill stated that the subjects who are Protestants may have weapons for their defense suitable to their conditions and as permitted by law.

The English Bill of Rights is often credited with influencing the Founding Fathers when drafting the United States Constitution.

How to Show Your Support for the Second Amendment?

There are several ways to show your support for the Second Amendment. First, you can purchase something like the Don’t Tread on Me flag.

Second, you can display another historical American flag consisting of thirteen red and white stripes and a blue canton with white stars. Finally, you can wear a pro-Second Amendment T-shirt or hat.

Why Choose Such Type of Flags?

The flag is historically designed by Christopher Gadsden in 1775. The flag features a yellow field with a coiled rattlesnake above “Don’t Tread on Me.”

The yellow symbolizes the sun’s rays, and the snake represents strength, danger, awareness, and wisdom. The snake was established as the symbol of America at that time by Benjamin Franklin. He expressed that as rattlesnakes do not back down at any circumstance, so do the people of America. He compares the temper and conduct of the Americans with that of the fearless rattlesnake.

In recent years, such types of flags have seen a resurgence in popularity as a symbol of patriotism and support for the Second Amendment.

How to Purchase a Flag for Supporting the Second Amendment?

Here are a few factors to consider:

Choose the Material of the Flag

The flags can be made from various materials, including cotton, nylon, and polyester. Nylon and polyester are synthetic materials, so they will be less likely to fade in the sun. Cotton is a natural material that may fade over time.

When purchasing a flag, you should consider the size of the flag. The ideal size for a flag is 3 x 5 ft. It will enable you to display your support and pride in your country and the Second Amendment.

The price of the flag is also essential to consider. These can range in price from a few dollars to over $100. You should ensure that you purchase those that fit within your budget.

How to Fly a Flag to Show Your Support?

To fly a flag, you will need to purchase a flagpole. The height of the flagpole should be at least 20 feet to display it correctly. Install the flagpole at a location that would emphasize the Don’t Tread on Me flag and stand strong as will the support for the amendment be.

You may also want to consider purchasing a stand. The stand will prevent the flagpole from sinking into the ground over time. Once you have your flagpole, follow these steps to fly your flag.

The Second Amendment is a fundamental part of American history and should be respected by all Americans. To show your support for the Second Amendment, you should consider flying a country’s flag in front of your home or business.

The flag will fly high to spread patriotic pride across your community!