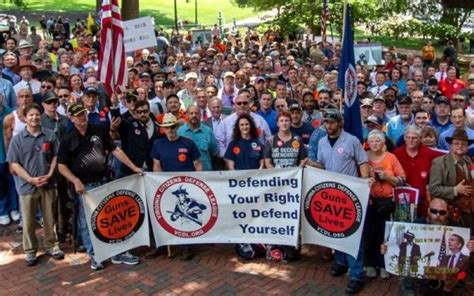 As the January 17, 2022 Lobby Day approaches in Richmond, Virginia, there is pro-gun infighting about the lack of a “rally,” and that the Assembly office building, where the lobbying will occur, is now part of a “gun free” zone.  The great angst about these details is understandable considering what motivates those of us that take peaceful peoples’ unfettered access to firearms so seriously.

Gun rights are an expression of our inalienable right to life, and “gun control,” conversely, is about taking away the right to life.  Once gun rights are understood that way, both our zeal and why we must act together to oppose an anti-life enemy becomes clear.

I’m indebted to two very different proponents of rights.  The first, Ayn Rand, understood and articulated rights better than anyone, including the Founders.

Having escaped Soviet communist tyranny, she saw the value of rights in the Declaration of Independence, but she realized that it would be better to derive those rights, much like a geometric proof, by starting with the axiom that we have a right to life, and then carefully noticing how we survive as a species.  We lack animal instincts and talons and teeth, so we survive by applying our minds to our possessions to make our way in the world.

If our right to life means anything, it logically follows that we have the right to use property to defend ourselves, and gun rights are a consequence of that right.  Working backwards, anything that infringes on property, especially guns, is a direct infringement of our right to life.

The second proponent helps fill in the gap left by Rand:  the modern problem with that articulation of rights is that the premise, a right to life, is not universally accepted.  I was amazed to learn that no less an ostensible authority on rights, Amnesty International, takes the following position in “An Introduction to Human Rights” (emphasis mind):

How is it that people can look in the mirror, or into the eyes of those they love, and conclude that the right to life is “relative?”

As my pastor often says, “The devil is a liar” and his influence is real.  Another Pastor, Douglas Wilson, in Rules for Reformers, wrote:

“If I am debating someone who wants to ban magazines with more than ten rounds, they want it to be about the magazines-whereas if I still have my wits about me, I should know that the debate is over whether or not the ATF rose from the dead in order to ascend into the heavenly realm, in order to give gifts to men… The real purpose of the law is to grow the power of the idol-state, and to shrink the power of those resisting it…

“Scripture tells us to do things with murderers that we simply refuse to do, and it never tells us to anything whatever with the murder weapons…[The Bible] does not say, however much we might like it to, ‘Because the heart of the sons of men is fully set in them to do evil, therefore remove all the weapons from the general populace, and accumulate them in the arsenals of an arrogant and overweening state.’”

When a former community organizer noticed the great affinity some of us have for our Bibles and guns, he was ironically closer to the truth about the connection between the two than he or his ilk could ever comprehend: both are about the right to life.  The more society distances itself from our Creator the more muddled its policies will become.

All of this brings us back to Lobby Day:  what should I say to my gun-grabbing “elected” officials?  There was a time when I’d want to fight about the Second Amendment, due process, and objective numerical data that proves that all gun control is nonsense.  I’m not retracting any of that nor am I dismissing anyone who pursues those lines of inquiry; everything should be thrown at the enemy and there’s a qualified advocate for each take on the matter.

In a sense I’m agreeing with Brian Moran, the (hopefully) outgoing Virginia Secretary of Public Safety, who mocked us at Assembly hearings by saying “they think they are Constitutional scholars!”  Like the community organizer, he was so close to the truth, but his Harvard mouth couldn’t speak it:  you don’t need to be a Constitutional scholar to figure out gun rights.

By shifting the focus away from distracting and irrelevant details, I’ll say “You want me dead in situations where that magazine could help me save my life.”  This gets right to the point and puts them on the defensive.  Instead of starting with their infringement, such as “You don’t have the right to take my magazine away,” or “I need that magazine to defend against multiple threats,” it starts and ends with “You want me dead.”  Notice the focus shifts from the details to the actual consequence of the infringement:  whether we live or die.

Whether you are queued up at the Pocahontas Building to lobby your state delegate and senator, or part of any group outside of the Capitol Square, I pray you will have a safe and successful Lobby Day by finding the words and means of expression that work for you—and our legislators.

— Dennis Petrocelli, MD is a clinical and forensic psychiatrist who has practiced for nearly 20 years in Virginia. He took up shooting in 2019 for mind-body training and self-defense, and is in the fight for Virginians’ gun rights. He speaks for himself, not his employers.