Newsom is using that same framework to attack gun owners. The concept is a simple one, a straightforward one, and one that even Justice Kavanaugh commented on was problematic. But SCOTUS has been very judicious, pardon the pun, in their duties as the final arbiters of the a law’s constitutionality. The currently conservatively stacked court has shown that, like many of their well respected predecessors, they take their duties as Justices, not activists, very seriously.
Regardless of anyone’s personal feelings on abortion, the structure of the Texas law is ripe for exploitation and the 2nd Amendment is probably the most vulnerable and practical target for those. There are certain to be other ways a law could be implemented, empowering an already lawsuit happy nation to attack one another, but with gun rights on about the same contention level as abortion rights it is the obvious parallel.
American Thinker has more on this line of thought below, be sure to click-thru at the end.

The Supreme Court has just heard oral arguments in the case of Dobbs v Jackson.  The justices have not reached a decision yet, but the decision could overturn Roe v Wade.  If the left dodges a bullet, and the Supremes uphold Roe, Governor Gavin Newsom would like them to think about it again.

You see, Texas did something creative, which Newsom thinks he can copy.  Texas came up with a novel way to reduce abortions.  Its new fetal heartbeat law makes abortions after a heartbeat is detectable illegal.  But it leaves enforcement up to private citizens — by making abortionists liable for civil damages.

Legal scholars are still trying to figure out if this approach places the law outside the realm of questions about constitutionality.  Do litigants actually have standing if nobody has been sued yet?  The Supreme Court hasn’t decided if the law is constitutional or not, but it has refused to prohibit the law in the short term.  The Court is allowing challenges to the law to wind their way through the lower courts — which could take years.  That gives the Court years to figure out how to get out of the pickle it created with Roe v Wade.

But the whole thing gave Governor Newsom an idea.  If Texas can kill the abortion industry with lawsuits, why can’t California do the same thing for the gun industry?  Don’t use the power of the state to shut down gun dealers.  Just allow private citizens to sue them out of existence.

What could go wrong?  Newsom has clearly outsmarted the Supremes.  They can’t possibly uphold the Texas heartbeat law and then strike down his gun control law — that is, not unless the Court finally accepts that one is a constitutional right and one is only an imaginary right — with the imaginary one being the one the left cherishes the most.

Newsom will force the Supreme Court to weigh written rights against imaginary rights.  The right to bear arms is an actual written right.  It’s right there in the 2nd Amendment.  I double-checked, and it’s really there, clear as day: the right of people to keep and bear arms shall not be infringed.  It can’t get any simpler than that.

But Justice Blackmun reasoned that a person’s right to privacy also gives her a right to terminate unwanted pregnancies at will.  Of course, there is no right to privacy written in the Constitution, either.  It was also discovered in a penumbra.  That makes a right to abortion an emanation, from another emanation, emanating from a Supreme Court justice’s imagination.  That seems more like an argument for therapy than a constitutional right.  But in our legal world, it’s accepted as sound constitutional reasoning.  Maybe the whole profession needs therapy.

So, if Newsom gets his way, he wants the court to explain to Americans that an actual written right is waivable, while an imagined right is not.  Somehow, he doesn’t see that his argument gives the Court two choices.  One is unacceptable to the left — but entirely justifiable by the written word.  When his gun law reaches the Court — and it will — he thinks he can successfully argue that point.  He must be really smart — or at least think so.

I assume it’s also a stroke of genius for Newsom to announce his strategy while the Supremes are still deliberating Dobbs v. Jackson.  Has it occurred to him that the justices are not cloistered monks?  They do read the news.  Might a couple of them be thinking they might as well bite the bullet and settle it in Dobbs, because Newsom’s gun law is going to make them take up the issue again anyway?

But I suppose one could cynically argue that the law is good politics, even if it’s constitutionally unsound.  Californians will welcome the opportunity to be disarmed in the face of rising crime and shrinking police response — won’t they?   So go ahead.  Decriminalize property crime.  Let criminals roam free with bail reform.  Enable leftist D.A.s to pursue social justice rather than criminal justice.  And then disarm law-abiding citizens.  Yup, I’m sure all Californians will be on board with that.  It sounds like a winning electoral strategy — to an ultra-rich politician who lives behind gated walls with his own private security.

Newsom hasn’t considered the deep meaning in rising gun sales.  You cannot tell people they don’t need guns because you have law enforcement and then stop enforcing the law.  Americans aren’t that stupid — even the ones that voted for Governor Hair Gel.  Reduced law enforcement, combined with a threat of more gun control, equals more gun sales.  The people have already told Newsom what they want — with the sales statistics.  He just isn’t listening.

But Newsom thinks he has a winning strategy.  Coddle the thugs, disarm his state, and give the finger to the Supreme Court.  Okay, go for it.  I’m sure everything will work out fine.  No need to worry about unintended consequences.  It’s foolproof.

John Green is a political refugee from Minnesota, now residing in Idaho.  He currently writes at the American Free News Network (afnn.us).  He can be followed on Facebook or reached at greenjeg@gmail.com. 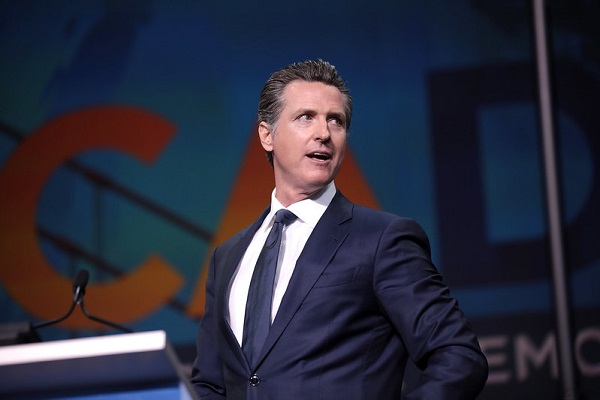