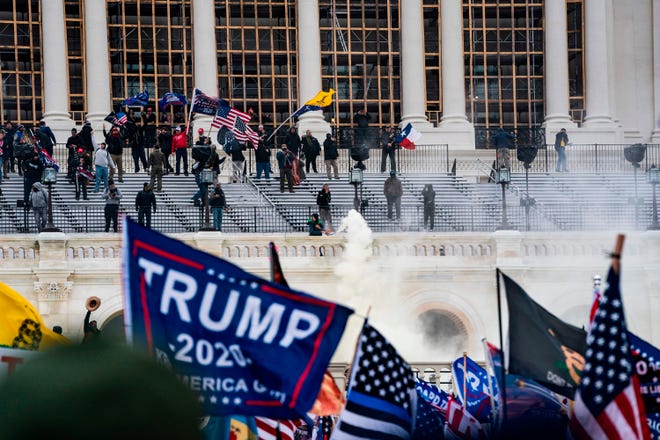 Below is an ‘interesting’, shall we say, take on the issue of home grown and domestic terrorism. It, unsurprisingly, plays the ‘White Supremacist’ label for all that it is worth. However, if we table our natural antipathy towards those terms (using them isn’t always inappropriate afterall) we see that people are waking up to the fact that a free society is dangerous, even if they don’t realize it.

Freedom is dangerous. Freedom does not come with mandates of safety, just the best (hopefully) efforts of people who take on those roles. The security of a free state comes from the people (2A) and their ability to combat extreme ideologies with reason (1A) and, if necessary, force (2A again). But none of that ensures safety, nothing about being free is safe in the absolute sense. There are still plenty of people who don’t recognize that, who are fundamentally incapable of moving their reason and emotions into the position that this life and our freedoms are not ‘safe’ and they cannot be made ‘safe’.

We can take steps toward safety, we can prosecute those who violate the laws against things like murder and mayhem or those who conspire to such acts. But we must be cautious, always, of the duty of government to respect the rights of citizens and enforce the contracts freely entered upon and to limit their interference beyond that.

You see it in the piece below, the discussion that the US has wantonly violated the rights of men and women we consider good and just, but that somehow we must the violate the rights of the people they see as the ‘bad guys’. The hard truth about domestic terror and freedom of speech is that it will always be with us, no matter how hard we crack down on it. It is almost a self fulfilling prophecy that the harder the screws are tightened on these people the harder they will fight back. With every single time the government gets it wrong, or is simply perceived to have gotten it wrong, the extremist will feel more vindicated.

This isn’t about being ‘soft’ on domestic terror so much as returning faith and trust in the even handedness of the government. We fight domestic terror by convincing more and more of our people that the society we are in believes in fairness and justice for all.

That sometimes means fairness results in a disliked outcome… and freedom isn’t safe, people are or are not.

From the York Dispatch,

In the wake of the 9/11 attacks, Americans understandably became obsessed with terrorist threats from abroad, particularly the “safe haven” of Afghanistan that was the launching pad for the attacks.

Today, however, perhaps the greatest threat to our nation comes from within, and we are ill-equipped to fight it.

The U.S. has become a de facto safe haven for domestic terrorists because of essential constitutional protections, dated strategies, and inadequate funding and focus. The U.S. Constitution has, in effect, become a weapon against us. The 1st and 2nd amendments must be preserved, of course, but what can be done when our protected rights endanger the republic?

This is not merely a thought exercise, but a continual point of tension in U.S. counter-terrorism efforts over the last two decades and well before that. I worked in the State Department’s Bureau of Counterterrorism from 2008 to 2018, a decade in which domestic threats were steadily on the rise. In testimony before the House Homeland Security Committee, FBI Director Christopher A. Wray put into words what I had witnessed. The internal threat posed by anti-government and racially motivated groups, he noted, must become a greater focus of counterintelligence work. Wray’s sober testimony is wise but understated. The U.S. must address this threat with greater urgency.

Home-grown anti-American extremists: Safe havens are physical spaces, typically not well governed, that allow for extremists to organize, recruit, train, proselyte, spread propaganda and raise capital to plan attacks. Extremists of various ideologies have used U.S. safe havens to collect the tools of murder to kill their enemies. At the same time, their widely disseminated propaganda has spawned acolytes. Instead of tiny windows to operationalize an attack, American white supremacists and other anti-government types have wide-open avenues in the U.S. to create their mayhem.

Recent attacks in the U.S. show how our meek approach to combating domestic terrorism has costs lives and undermined our security. Dylann Roof’s slaughter of nine Black worshipers in Charleston, S.C., in 2015; Robert Bowers’ AR-15 attack in 2018 that killed 11 at a Pittsburgh synagogue; and the insurrectionists’ Jan. 6 attack on the U.S. Capitol each check the three boxes for what constitutes a terrorist act: targeting noncombatants, violence or threat of violence, and provoking fear among an audience that goes beyond the intended direct target.

A balance: The reticence to treat domestic and international terrorism equally is inexorably linked to constitutional freedoms and a history of government overreach. The FBI violated U.S. law in the 1960s by spying on the Rev. Martin Luther King Jr. and others. Through an effort dubbed the counterintelligence program, the government treated peaceful civil rights activists as terrorists and trampled their constitutional rights. These painful memories rightfully linger and must give us pause, but they should not inhibit our ability to charge mass shooters like Roof, Bowers or the most dangerous insurrectionists with a terrorism count. We can protect individual rights while crafting a legal framework that allows for more robust efforts to snuff out domestic terrorism.

Those who have exploited the American safe haven have often hidden behind constitutional rights provided by the 1st and 2nd amendments. Of course, neither amendment is absolute. The 1st Amendment does not protect, for instance, the use of social media platforms to plan, foment and fund violence. And though anti-government groups wield absolutist interpretations of the 2nd Amendment, passing laws that curb access to guns is well within the mandate of federal and state governments. With this in mind, there are some actions the U.S. can take to disrupt America’s role as a safe haven.

First, we need to shift resources. This means devoting more FBI funds to understanding and then blunting the domestic threat, but without neglecting the still-virulent threats from abroad. We also should refocus foreign resources and personnel, such as the CIA, to engage with the transnational far-right threat. This would require adjusting our foreign intelligence collection structure so that we can decipher and then undermine this threat. We have already begun this recalibration of counterintelligence efforts, although we need the sort of domestic-international coordination that was notably lacking in the lead-up to the 9/11 attacks.

Call it what it is: Then the U.S. needs to update federal laws so that acts of terrorism can be categorized as such. Doing so will provide more pathways for prosecutors to charge suspects and their accomplices for their planned acts of domestic terrorism. Additional domestic terrorism charges could also serve to deter would-be terrorists.

We also need to deal with the social media platforms that enable the fundraising, recruiting and planning of attacks to occur with speed and ease. Social media have become fertile ground for a terrorist ecosystem that knows no borders, as Facebook whistleblower Frances Haugen has made quite clear. It has been used to groom future extremists and to launder hatred. The U.S. is a net exporter of white supremacy extremism, and America’s safe haven allows the fomenting of violence in the U.S. and abroad.

We should consider measures that would remove some of the legal liability protections social media companies have enjoyed. For instance, when Silicon Valley’s algorithms recommend disinformation, conspiracy theories, hate or violent content, they should be held to account. If someone has become radicalized online through algorithms that direct them to extremist content, the creator of the content should be sued in civil court and the government should levy fines against the company, just as the U.S. government does when financial institutions allow money launderers to move ill-gotten funds.

This work must begin now rather than after the next domestic terrorism attack when emotions will be raw and government overreach most likely. The U.S. fell into this trap after 9/11, when overaggressive surveillance and torture of prisoners, many of whom were innocent, became tools of counter-terrorism. Those policies didn’t make America safer. Instead, they created more radicalization and provided bad actors an effective recruitment and propaganda tool.

By developing a stronger framework with oversight and input from privacy and civil liberties experts, alongside counter-terrorism experts, we can better fight domestic extremists and ensure that our constitutional freedoms are not eroded.

— Jason M. Blazakis is a professor of practice at the Middlebury Institute of International Studies. He was director of the State Department’s Counterterrorism Finance and Designations Office in the Bureau of Counterterrorism from 2008 to 2018.