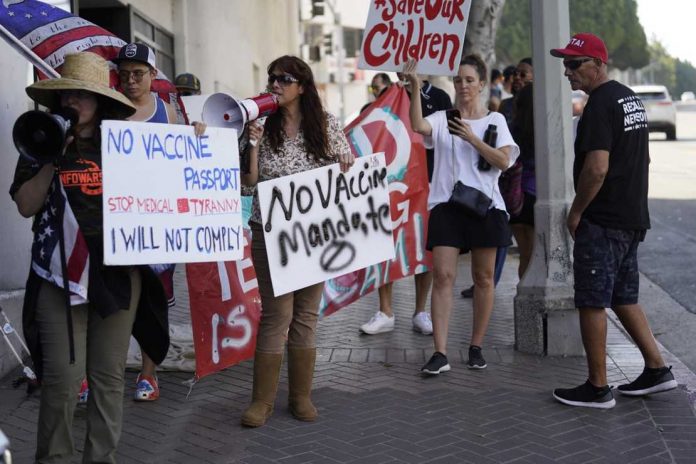 Two more labor unions representing federal employees have filed lawsuits seeking to block President Joe Biden’s mandate for many federal workers to be vaccinated or face the potential of losing their jobs. One of these that might prove to be the most interesting was filed by the union representing federal prison workers. It’s also worth noting that this lawsuit was filed only days before Biden delayed the implementation of the “disciplinary actions” against those who fail to comply. While that may simply be a coincidence, it’s a curious one, to say the least. What makes the prison workers’ lawsuit potentially more intriguing is that the suit claims that requiring workers to disclose their vaccination status amounts to forcing them to engage in political speech with which they may disagree. (Government Executive)

On November 23, the Council of Prison Locals, a division of the American Federation of Government Employees, as well as AFGE Local 2018, which represents federal employees at a Marine Corps base in Twentynine, Palms, California, brought a lawsuit in the Eastern District of Pennsylvania against President Biden, Office of Personnel Management Director Kiran Ahuja, Attorney General Merrick Garland and Defense Secretary Lloyd Austin III in an attempt to stop Biden’s executive order that requires federal employees to show proof of COVID-19 vaccination, unless they request an exemption. The federal prison employees union previously filed a lawsuit against the mandate on October 30, which was not the first on behalf of federal employees overall.

“By requiring workers across America to disclose their vaccination status, defendants Kiran Ahuja and Joseph R. Biden are forcing them to engage in un-sought-out, and individually undesirable, political speech in violation of the First Amendment,” said the complaint. “Additionally, the OPM mandate disregards the rights of unionized employees as outlined and protected in the Civil Service Reform Act in which all changes to terms and conditions of employees must be bargained in good faith.”

I’m not sure how well this argument will be received by the courts, but it’s definitely worth keeping an eye on. Unfortunately, workplace vaccination requirements have been held up in the courts in the past, though the rationale for them has traditionally been described differently.

Can the act of providing information to your employer about your vaccination status actually be considered “political speech?” It’s true that arguments over mandating COVID vaccines have become massively politicized and for good reason. If the manager of the prison attempted to force the workers to make public statements in favor of the mandate when they actually oppose it, that would clearly be unconstitutional. But those are political opinions. Delivering factual data about your medical records doesn’t seem to inherently contain a political message because simply saying that you are or are not vaccinated doesn’t necessarily imply that you did or didn’t do it because of any orders from the government.

The courts may wind up taking a cautious approach to this claim because of the potential it might have for disruptions across wide swaths of the American workforce and all employers. If they rule that an employer can’t force you to show proof of a COVID vaccination on these grounds, then it could (and probably would) be argued that employers can’t ask for any medical information of any kind from their workers. That’s typically the case in most settings anyway, but if hospitals can’t ask their employees if they have contracted an infectious disease, that would obviously be problematic. It could also apply to more mundane matters. When you apply for a job loading delivery trucks for UPS you are asked to state whether or not you are capable of lifting a weight of fifty pounds. That could be considered a medical question, right?

Until Omicron showed up I had been under the impression that COVID was going to fade into the background far enough that mandates wouldn’t be needed any longer and the problem would take care of itself. Now, however, I won’t be shocked if the Biden administration attempts to make them a permanent fixture in American life. And that should not be allowed.