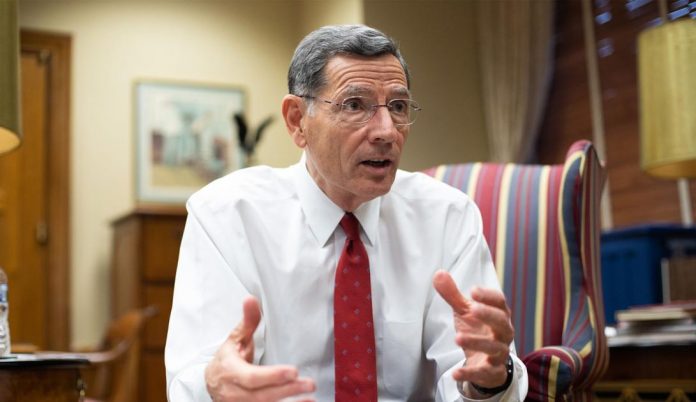 The American people gave President Biden an F “across the board” on the border, high prices, and Afghanistan, and signing a bipartisan infrastructure bill is not going to change that, Sen. John Barrasso (R-Wyo.) said on Sunday.

“So, only one in five Americans think the country is heading in the right direction, and no matter what bill the president happens to sign tomorrow, that’s not going to change the failing grades. The problem is the Democrats are now saying we want to go all in with this massive tax and spending bill, which is going to harm American families. People are going to pay higher prices,” he said.

“They’re going to be higher taxes, and of course, we’re going to see an increase in the debt. So Republicans are heading in the right direction. The Democrats are full speed ahead against the ideas of what the American people want, and even Jason Furman who was President Obama’s economic adviser, he said what they’re proposing here will add to inflation in 2022,” Barrasso said.

When asked what evidence he has that the Build Back Better bill will add to inflation, Barrasso said, “Well, there are a couple of things, and let’s start with — this is not really just $2 trillion. I think it’s much closer to $4 trillion because what the Democrats have added in after their election losses has been tax breaks for millionaires.

“This is not just me saying it. The experts are saying with what is in this bill, and Americans, the more they find out about it, the less they like it — specifically all the new IRS agents who are going to be hired, an army of IRS agents to do more audits,” he said.

“The experts are telling us that 30 percent of middle class Americans will end up paying higher taxes and what Nancy Pelosi has shoved in, the special tax breaks for millionaires in California, New York, New Jersey, that is actually going to give a tax break to two-thirds of the millionaires in America,” the senator said.

“The reason I think prices are going to go way up is because of some of the things that they have put into the bill on energy and on climate, which are going to raise energy costs considerably in the year ahead, at a time when the American people are already paying sky-high prices to heat their homes, to drive their cars, to buy groceries, and inflation as we know hurts the most vulnerable,” he said.

“Who gets hurt with inflation? It’s the poor people, the people living on a fixed income. It’s the elderly. It’s all of these folks struggling to get by. I would have never believed that Joe Biden in just 10 months in the presidency could bring us to a 30-year high of inflation,” Barrasso said.