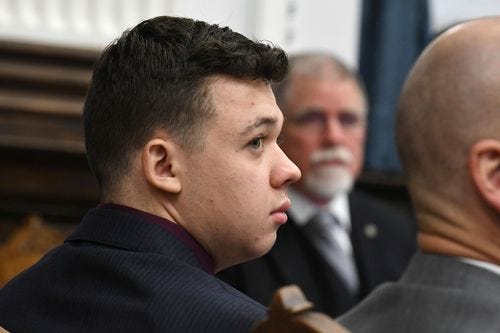 If you click through, you’ll notice a headline change, however the Judge dismissing the weapons charge on Kyle Rittenhouse is a major deal…
Why?
That was the only reasonable charge they could have hoped to sustain an argument on as the prosecution managed to prove over and over that, from a self defense perspective, Rittenhouse probably acted reasonably.
An argument can be made on whether or not it was wise of him to be in Kenosha to begin with, but the possession charge related to the AR-15 and Rittenhouse’s age were the firmest ground he had to stand upon.
The final Hail Mary of the prosecution is to convince the jury that Kyle was the original provocative agent, a hard sell given Rosenbaum’s own actions that day.
From KAKE,

The prosecutor dismissed Rittenhouse’s “cockamamie theory” that Rosenbaum — who did not have anything in his hands when he was shot — was going to take the teenager’s gun and kill other people.