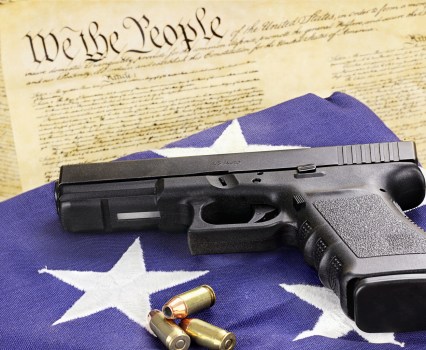 The ongoing NYSRPA vs BRUEN case before the Supreme Court has the potential to drastically change how individual Second Amendment rights in this nation are treated. The Second Amendment continues to be the red-headed step child of the constitution with everyone in a position with a power axe to grind and a need to ‘curb gun violence’ taking a swing at this low hanging and intellectually dishonest fruit.
2A Proponents support an essentially unlimited interpretation of the Second Amendment, where citizens and residents can own whatever the please so long as its use is non-criminal. Want a tank? Buy a tank. But use the tank to damage your neighbor’s property, joy ride inside it intoxicated, or fire the big gun in a unsafe manner, and to jail you go. But owning it, and operating it in a safe manner are a-ok.
2A Opponents land anywhere from, ‘universal background checks’ to ‘only firearms for the police, military, and national guard’ as they personally consider those professional fields as covering the militia clause. The majority of Americans fall wherever their experience, social biases, and understanding of the topic land them. Although the more informed one is on the function of firearms, the shaping of self defense law, and the current legal procedures in place the more the tendency towards a classical interpretation of the 2A seems to propagate, where as casual familiarity or passing pieces of information being the foundation of the opinion tends to have an individual put into ‘modernized’ restricted legal interpretations.
Justice Thomas tends to hold an ‘originalist’ or classic interpretation of the Second Amendment but the complexities of modern legal precedents and his own comments might make such a view an impossibility.
From VERDICT,

Last week the Supreme Court heard oral argument in New York State Rifle & Pistol Ass’n (NYSR&P) v. Bruen, the most important gun rights case to come before the Justices in over a decade. In 2008, in District of Columbia v. Heller, a 5-4 majority found that despite its prefatory language invoking a “well regulated Militia,” the Second Amendment protects an individual right to possess firearms for self-defense in the home. Two years later, in McDonald v. Chicago, the same majority held that the Fourteenth Amendment “incorporates” the Heller right, i.e., makes it applicable to state and local governments. NYSR&P poses the question whether the right to possess firearms exists outside the home. If so, the plaintiffs argue, then New York’s law restricting permits to carry firearms in public to those who can demonstrate “proper cause” is unconstitutionally restrictive.

One can never be certain what the Court will do based on the argument, but a majority of the Justices appeared likely to rule against the state. Indeed, at times, it sounded like the real question was simply how broad a right the Court would find. Heller recognized government authority to restrict firearms in “sensitive places” like courthouses and schools. Are the New York City subways a sensitive place? What about the outdoor areas of college campuses to which the public has access? How, if at all, is population density relevant? Questions like these presuppose that the Court will find the New York law too restrictive, even as they also imply that more litigation will ensue over what kinds of restrictions are permissible.

If and when the Justices find a right to public carriage of firearms, there will be time enough to parse the details. For now, let us put aside what the Court will likely conclude in NYSR&P and subsequent cases to focus on how it might get there. Given that most of the Court’s conservative majority at least sometimes describe their job as applying the Constitution’s original public meaning, history played a substantial role in the NYSR&P briefing and oral argument. However, as a question posed by Justice Clarence Thomas early in the argument illustrates, not only do scholars and advocates on opposite sides of the case read the relevant history differently; there is profound uncertainty over what history counts.

Attorney Paul Clement argued the case for the plaintiffs. He contended that “history and tradition” supported his position. Justice Thomas, who, more than any of his colleagues, espouses originalism, understood Clement’s invocation of history to imply that the Court should look at what the constitutional text meant to the People who ratified it. But that then raised a question. Justice Thomas asked: “should we look at the founding, or should we look at the time of the adoption of the Fourteenth Amendment, which then, of course, applies it to the states?”

Clement, a former Solicitor General of the United States, is an excellent lawyer, so he gave the answer that best served his clients: it doesn’t matter. Whether you look at the original public meaning in 1791, when the Second Amendment was ratified, or at the original public meaning in 1868, you will find the same answer: a right of generally law-abiding citizens to carry firearms in public.

Is that right? As I discussed in an article published in the Northwestern University Law Review earlier this year, there is reason to believe (and sources cited in footnote 37 of my article conclude) that the People who ratified the Second Amendment understood its language to prevent the federal government from disarming state militias but not to have many implications for individual firearms possession, while the People who ratified the Fourteenth Amendment in 1868 understood at least some kind of individual right to keep and bear arms to be among the privileges and immunities that the provision secured against state interference.

Privileges or Immunities Versus Due Process

The terms “privileges” and “immunities” appear in Article IV of the original Constitution and again in Section 1 of the Fourteenth Amendment. The latter use— “No State shall make or enforce any law which shall abridge the privileges or immunities of citizens of the United States”—is most naturally read to make the Bill of Rights, which when adopted in 1791 bound only the federal government, applicable to states and their subdivisions. However, an 1873 Supreme Court ruling essentially read the Privileges or Immunities Clause out of the Constitution. Accordingly, the Court’s cases applying the Bill of Rights to the states rely on a different provision of Section 1 of the Fourteenth Amendment, its Due Process Clause.

Justice Thomas disagrees with that approach. In a concurring opinion in the 2010 McDonald case, he stated that he would rely on the Privileges or Immunities Clause, not the Due Process Clause, to incorporate the right to keep and bear arms. Notably, however, no other Justice joined him in this proposal, which would generate considerable uncertainty. Consider that the Due Process Clause protects every “person,” whereas the Privileges or Immunities Clause shields only “citizens.” Under the approach favored by Justice Thomas, could a state deny free speech rights to permanent residents who are foreign nationals? Could it subject them to cruel and unusual punishments?

Such issues will likely remain hypothetical for the foreseeable future, but Justice Thomas’s question about the potential divergence between 1791 and 1868 is already salient. His McDonald concurrence provides one answer. There, Justice Thomas expressly stated that in determining the scope of a right incorporated by the Fourteenth Amendment, the Court should look to the public understanding of the words in question—for him “privileges or immunities”—at the time of ratification, 1868. His lengthy McDonald concurrence delves deeply (albeit controversially) into evidence of how Reconstruction-era politicians and their contemporaries thought about that language.

Much of the historical material Justice Thomas discussed in McDonald concerned nineteenth-century views about arms-bearing generally, rather than views specific to the words “privileges or immunities.” Thus, it should be relevant to his colleagues, who think that the Due Process Clause continues to do the work of incorporation. And indeed it was. Justice Samuel Alito’s majority opinion in McDonald covered much of the same historical ground as Justice Thomas covered.

Yet there is considerable tension between, on the one hand, the historical approach favored by the Court’s conservative majority in McDonald and (seemingly) NYSR&P, and on the other hand, the Court’s general approach to incorporation of the Bill of Rights.

We have already encountered one reason why a right might be different as applied to the federal government and the states: perhaps by the time the People ratified the Fourteenth Amendment in 1868, their understanding of the right had changed from the views that prevailed when the original Bill of Rights was ratified in 1791. Federalism provides another explanation: within broad bounds, each of the fifty states might be permitted some leeway in light of distinctive traditions and variations in their legal systems.

Despite the appeal of history and federalism, the Court eventually settled on jot-for-jot incorporation. Indeed, just last year, in Ramos v. Louisiana, Justice Neil Gorsuch, writing for the majority, decisively “rejected the notion that the Fourteenth Amendment applies to the States only a watered-down, subjective version of the individual guarantees of the Bill of Rights” (citations and internal quotation marks omitted). In Ramos, the Court held that the Fourteenth Amendment’s incorporation of the Sixth Amendment’s right to jury trial in criminal cases precludes conviction based on a non-unanimous jury decision in state court, just as in federal court.

To be sure, in Ramos, as in McDonald, Justice Thomas concurred separately to insist that the Privileges or Immunities Clause, rather than the Due Process Clause, does the work of incorporation. But for him as well as his colleagues, originalism—which allows for changed meanings between 1791 and 1868—stood as no obstacle to full incorporation, which they favored on what pretty clearly appeared to be policy grounds.

In that respect, the irrelevance of Justice Thomas’s question—1791 or 1868?—jibes with everything else we know about originalism. In the most hotly contested cases that come before the Supreme Court, arguments rooted in original meaning typically serve a rhetorical function. Justices invoke them to justify decisions taken on other, ideological, grounds.

1791 or 1868? More like 2021. Writing about Heller in the Harvard Law Review, Yale Law Professor Reva Siegel explained how “[t]he New Right embraced originalism as the jurisprudential vehicle for . . . [i]ts gun-rights agenda.” The same movement that transformed a militia-focused constitutional provision into an individual right to armed self-defense captured enough national political power to place sympathetic Justices on the Supreme Court. Thus, a ruling against New York State in NYSR&P will implement the Constitution but not the Second or Fourteenth Amendment. It will reflect the disproportionate power that the Senate and Electoral College afford the gun-rights-favoring constituencies who vote Republican.