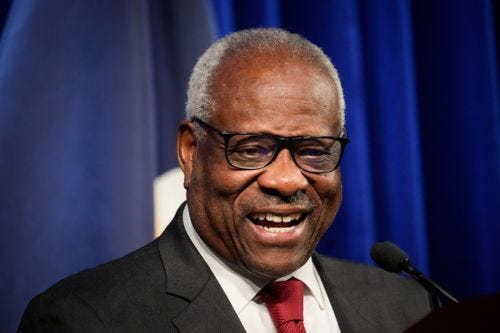 Justice Clarence Thomas is among the most outspoken, well spoken, and orative Justice’s the Supreme Court has ever held. He is unafraid to articulate an opinion, even if and perhaps especially if that opinion is contrary to what someone thinks he should hold. He is a staunchly conservative Justice, but like his colleagues both current and former he takes his role upon the court very seriously and is cordial and respectful of the Justices he disagrees with as well as those he agrees with.

This is one of the few things that sets the court apart from Congress and the White House, the Justices make great efforts to be constitutional and limit the partisan influence to that which makes sense within the bounds of the constitution. The continued mutual respect shown among the Justices, no matter who empaneled them, demonstrates the high degree of professionalism this branch of government continues to exude. Another such example was the late Ruth Bader Ginsburg, who while ideologically opposite of Thomas, nonetheless exuded the professional attitude of the court more often than not. Disagreeing with her wasn’t cast as enemy status or vice versa, it was merely a disagreement. We could learn from the cordial nature of the Justice’s interactions and the attitude with which they approach their solemn sworn duties.

Justice Clarence Thomas‘ unconventional ideas, daring rhetoric and booming baritone have distinguished him from his Supreme Court colleagues over the past 30 years.

From the start, his image at the 1991 Senate confirmation hearings went beyond the world of the law. The 73-year-old Thomas remains a cultural icon, especially on issues of race and sex.

He is an enduring subject of books, movies and all manner of political debate, related to Anita Hill’s accusations of sexual harassment, the expectations of civil rights leaders and Thomas’ own views of racial stereotypes and constitutional conservatism.

Thomas himself has vividly filled in the contours of his persona over the past three decades. He remains one of the most quotable justices in court opinions, extracurricular writings and interviews.

Here is a sampling of some of Thomas’ remarks on flashpoints over the past 30 years.

“From my standpoint as a Black American, as far as I am concerned, it is high-tech lynching for uppity Blacks who in any way deign to think for themselves, to do for themselves, to have different ideas, and it is a message that, unless you kowtow to an old order, this is what will happen to you,” Thomas said. “You will be lynched, destroyed, caricatured by a committee of the US Senate, rather than hung from a tree.”