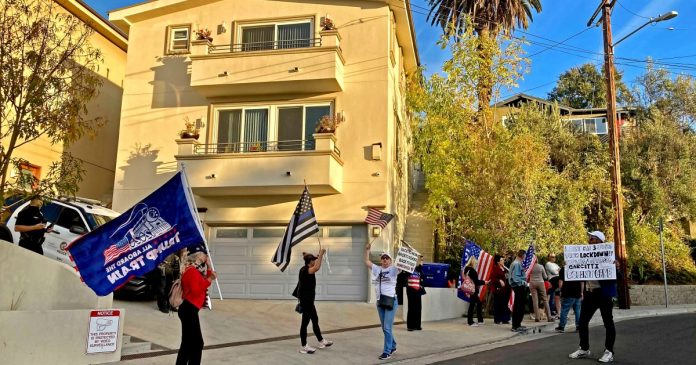 Two LA Times letters to the editor from September cover the two opposing opinions when it comes to the buffer ordinance that Los Angeles has put forth. This brings to the forefront the larger question of what are public servants reasonable rights and expectations of privacy and at what level of grievance might it be acceptable to escalate the intrusions.
In a polite society with a respectful populace and a open eared council legislative body these types of discussions would be unnecessary, but we do not live in that polite society at the moment. Politicos who are tone deaf and a citizenry getting sick of their attitude have resulted in typical societal codes of polite behavior being eschewed because they do not feel respect is being delivered from the other side. Respect is a mutual feeling, a delicate state between the two parties involved and if one side feels constantly disrespected it will feel no obligation to honor any behaviors built on respect.
Being the ‘bigger person’ is not in vogue (or en vogue) right now. Escalating grievances is.
From LA Times Letter-to-the-Editor,

To the editor: The Times’ opposition to the Los Angeles City Council’s 100-yard buffer ordinance — in essence, on the grounds that public officials implicitly “trade off” their right to quiet, safe enjoyment of their homes when they sign on, and people are going to break the new law just like they break the old one, so why bother — bespeaks an utterly ivory-tower outlook that ignores real-time, real-world dynamics as well as basic human decency.

Members of the editorial board should venture forth and experience first-hand the difference between being 100 feet and 100 yards from a slavering horde — whether antifa or MAGA — that can easily overpower law enforcement in an instant. They should try working at their kitchen tables with their families surrounded by an enraged mob within in easy brick, bottle and handgun range.

No one should be expected to function — much less serve the public, which includes their critics — in such conditions. The Times apparently recognizes that the 1st Amendment doesn’t require it; neither should our city.

To the editor: Over the last several years, the 15 members of the Los Angeles City Council have been elevated to kings and queens, and their districts have become their very own fiefdoms. Our council members have been shielded from us by a tight inner circle of deputies, a circle of special interest groups, another circle of city bureaucracy and finally social distancing rules because of COVID-19.

It has become impossible for us peasants to talk to our council members and feel confident they heard us.

A politician’s family and home is customarily off limits to protests, but this council has been tone deaf and ineffective on every major issue that has gripped the city. Angelenos are tired of not being heard, so the only option left is for them to protest outside of their council members’ homes.

I do not support the protest activity at all, but passing a law that infringes on the right to protest will further isolate council members from their constituents. They should should get “back to basics” by getting out of City Hall, walking their districts, engaging their constituents and listening to them.

Angelenos need to know they are being heard.