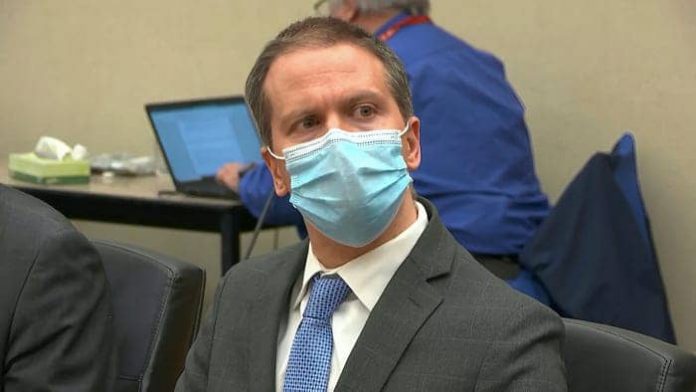 The Chauvin trial was an emotional one nationwide as the murder of George Floyd kicked off riotous events and demonstrations across the nation and the world. The jurors who convicted Derek Chauvin are set to become public record next month. This is always a concern for high profile cases, which draw emotional and sometimes violent reactions, and it is a reason names are often withheld for periods of time to let attitudes cool off. With the conviction, it is unlikely there will be any problems but the Chauvin trial will be a defining one of the next decade at the least.
From Yahoo News,

The judge, who has kept the names sealed until now, issued the detailed 31-page ruling after a coalition of several local and national news outlets, including the Star Tribune, filed a motion in early August asking him to unseal juror names.

Cahill will not release the identities online, but media and other members of the public will have access to the names at the Hennepin County Government Center in downtown Minneapolis, where the trial was held. Cahill said he would not reveal the addresses of the jurors or prospective jurors.

Cahill noted that the First Amendment doesn’t permit him to restrain the media behavior, but encouraged reporters to make “respectful inquiry and scrutiny of jurors so that the public can better understand their verdict and the workings of the criminal justice system.”

A Hennepin County jury convicted Chauvin on April 20 of second-degree unintentional murder, third-degree murder and second-degree manslaughter for killing Floyd after kneeling on his neck for more than nine minutes during an arrest in May 2020. Cahill sentenced him to 22½ years in prison.

Three days after the trial, Cahill ordered juror names and information sealed. In most cases, juror information is considered public and typically released immediately after a verdict. But the Chauvin trial was the most high-profile trial in state history and the first to be broadcast to a global audience. Floyd’s death sparked days of civil unrest throughout Minneapolis and the trial was held under extreme security.

In his previous decision to keep the names sealed, Cahill cited threats and harassment of participants, including himself.

“The Court itself has received unprecedented levels of e-mails and telephone calls about this case,” the judge wrote at the time, adding that sealing the information would protect jurors from “unwanted publicity or harassment.”

Cahill said in his April order that he would revisit the issue no faster than six months.

The Minnesota Attorney General’s Office, which led Chauvin’s prosecution, filed a memorandum seeking to keep juror information sealed, citing upcoming trials of three other officers in Floyd’s murder and a pending federal trial for all four.

“The Court should not revisit its Order — mere months before the criminal trial for Mr. Chauvin’s three co-defendants, and in advance of potential federal proceedings — when the likelihood of harassment will increase in the coming months and the marginal value of disclosure is low,” wrote Assistant Attorney General Matthew Frank and Special Assistant Attorney General Neal Katyal. “Once this Court releases jury information, it cannot turn back …”

Prosecutors argued that releasing the information now would make it difficult to find jurors for the trial of Chauvin’s three former co-workers who are also charged in the case. J. Alexander Kueng, Thomas Lane and Tou Thao are scheduled to be tried jointly next March on charges of aiding and abetting second-degree murder and manslaughter.